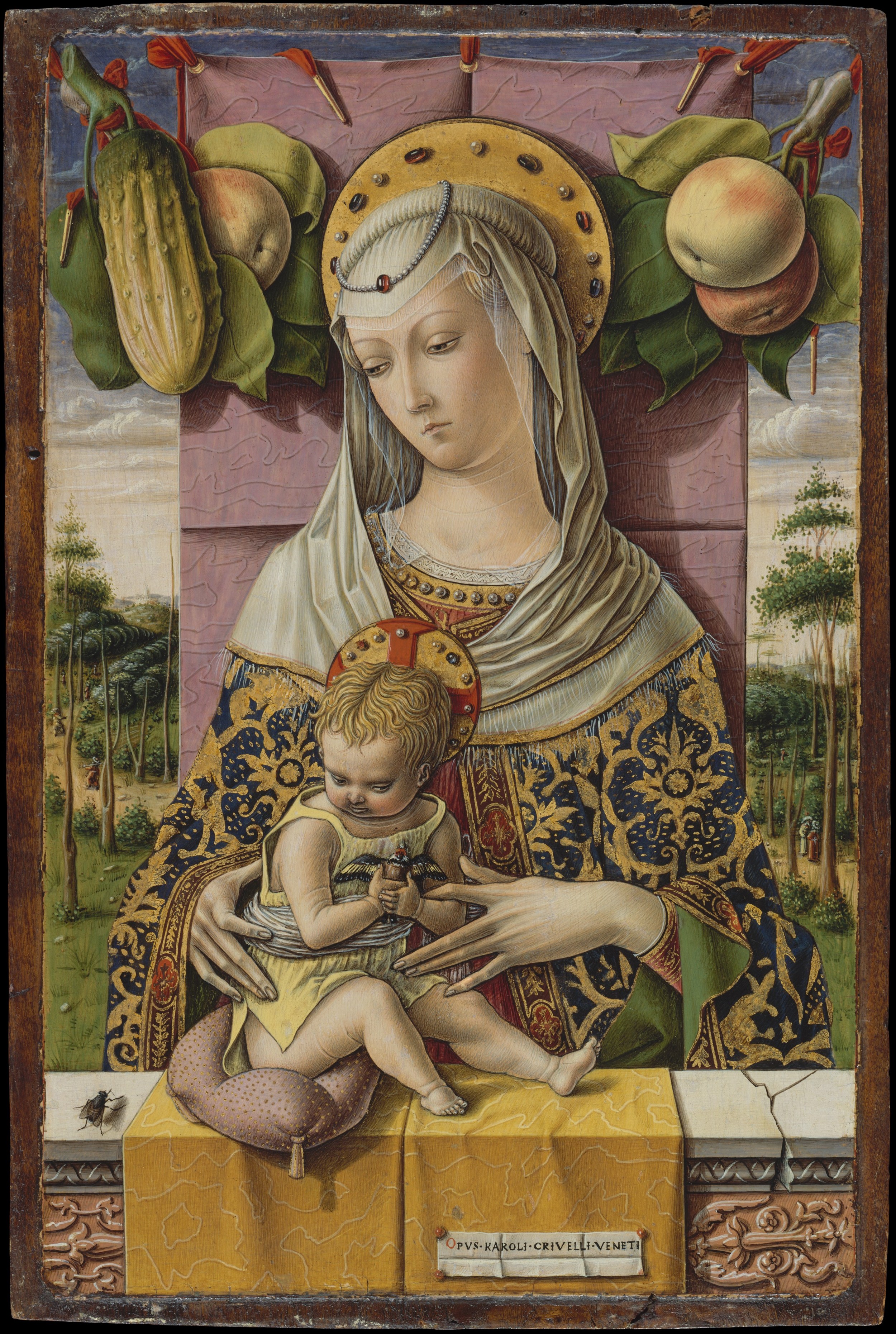 Carlo Crivelli was born around 1430–35 in Venice to a family of painters, and received his artistic formation there and in Padua. After a century’s work in Italian archives, the details of Crivelli’s career are still sparse: the only dates that can with certainty be given about his life as a painter are his first appearance, already a master of his own shop, in 1457, in a matter of adultery for which he was imprisoned for six months; and the earliest and the latest years signed on his pictures, 1468 on an altarpiece in the church of San Silvestro at Massa Fermana, near Fermo, and 1493 on The Dead Christ between St John, the Virgin and Mary Magdalene (Brera Gallery, Milan).

Though the artist advertised his Venetian origin in his constant signatures varying upon Carolus Crivellus Venetos (“Carlo Crivelli of Venice”), Crivelli seems to have worked chiefly in Le Marche of Ancona, and especially in and near Ascoli Piceno; there are only two pictures remaining in Venice, in the church of San Sebastiano. He is said to have studied under Jacobello del Fiore, who was painting as late at any rate as 1436; at that time Crivelli was probably only a boy. He also studied at the school of Vivarini in Venice, then left Venice, initially, it is generally believed, for Padua, where he is believed to have worked in the workshop of Francesco Squarcione and then for Zara in Dalmatia (now part of Croatia, but then a Venetian territory) in 1459, following legal trouble after he was sentenced to prison for six months for having an affair with a married woman, Tarsia Cortese, the wife of a sailor.

He painted in tempera only, despite the increasing popularity of oil painting during his life-time, and on panels, though some of his paintings have been transferred to canvas. His predilection for decoratively punched gilded backgrounds is one of the marks of the conservative taste, in part imposed by his patrons. Of his early polyptychs, only one, the altarpiece from Ascoli Piceno, survives complete in its original frame; all the others have been disassembled and their panels and predella scenes are divided among the world’s museums. An amorphous band of contemporaries and followers, termed Crivelleschi, show to varying degrees aspects of his style.