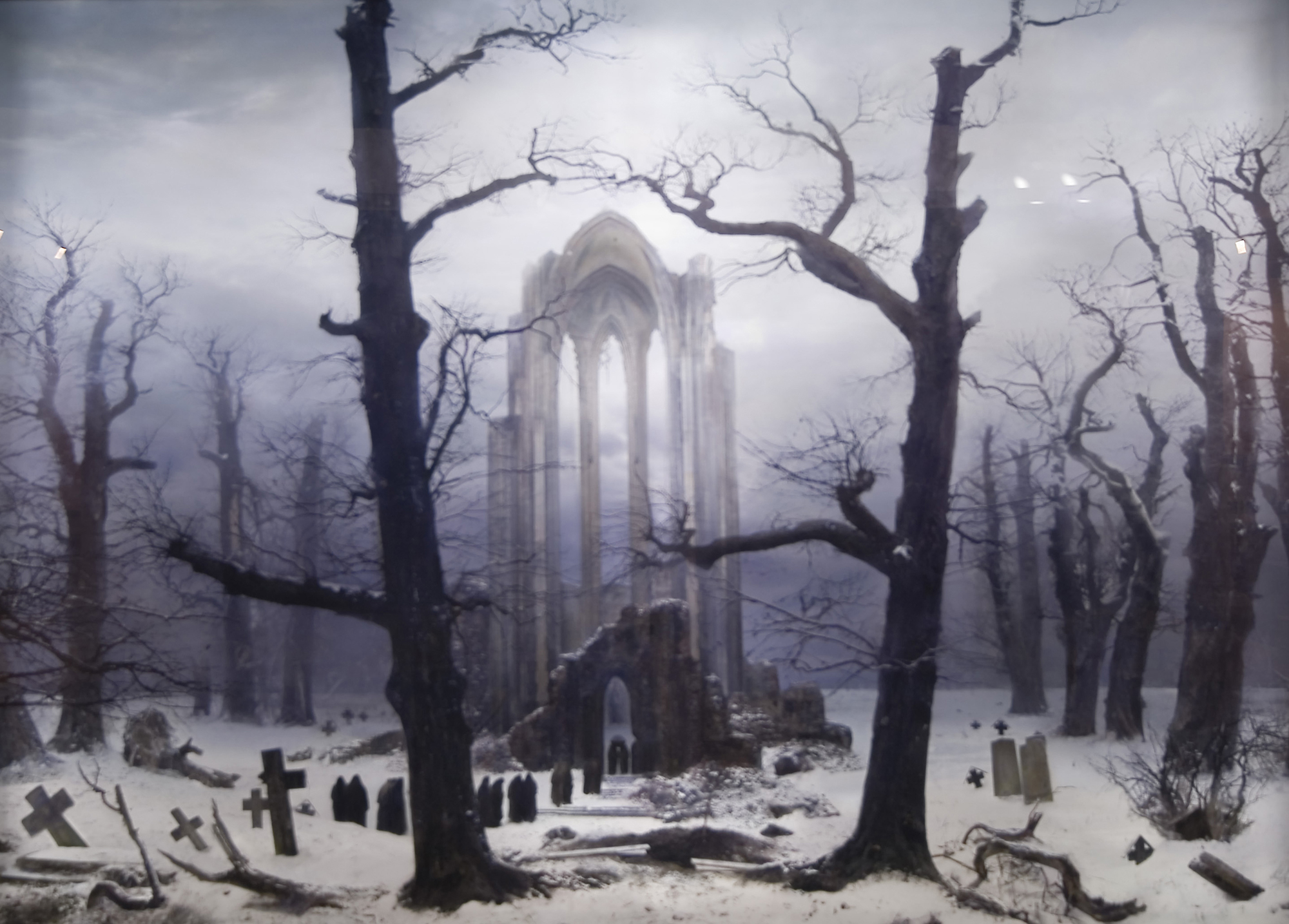 Profoundly yet sensitively Germanic, images by Caspar David Friedrich are those of a Wagner in nucleo – without the heavy orchestral breathing. Implicitly musical, the painter’s tender art reaches back to Mozart and on to Richard Strauss, filled with death and transfiguration. A one-man, more benevolent Brothers Grimm, Friedrich, born in Swedish Pomerania, never terrorized his enchanted audience of overgrown Kindergartners.

Protestantism, conveyed by the vehicle of the visual arts, tended to see Nature more as pagan Mother than God’s Work, too close to pantheism for comfort (or a free ride). Friedrich presents an exception. His anti-Classical emphasis upon experience, its reception and communication, stressed the personal, the “I in the eye,” the mind, the heart, and the hand. Heinrich von Kleist wrote how a Friedrich landscape, one “with nothing but a frame as foreground,” made him feel as if his “eyelids had been cut away.” So radical a perception of the image shows Friedrich’s art as a shocking breakthrough, bordering upon an expressionistic confrontation, facing infinity.

By illumination and artful scenic shifting, the painter brought to light an awesome interweaving of Nationalism and Protestantism seen as one and the same, revealed by and within a Teutonic Nature. Were you to send Burke’s Philosophical Enquiry into the Origins of Our Ideas of the Sublime and the Beautiful (1757) to attend a liberal German Protestant Seminary of the next decades, the spiritual mix would come close to Friedrich’s art. The painter’s love for medieval motifs was inspired by his friend Goethe, whose first book, Von deutscher Baukunst (1773), was given over to the architectural beauties of Strasbourg Cathedral, ascribed to an otherwise mythical “Meister Erwin,” First German Builder.

Paradoxically, it was Napoleon, that New Caesar and Alexander – seen by Friedrich as the Antichrist incarnate – who helped northern Europe admire the spectrum of its medieval heritage, looting many early paintings from Germany and the Lowlands for exhibition in his museum at the Louvre. Both the Napoleonic presence and expulsion from German lands resulted in a fresh appreciation for, and even fabrication of, Teutonic and later Christian roots…

Placed at the Dresden Academy in 1798, Caspar David was followed there by some of his best students from the Copenhagen Academy, such as Georg Friedrich Kersting (516). The artist was now well situated to sell his works to visiting Prussian and Russian royalty so often stopping at that great art center for studio visits, many such purchases now in Berlin and The Hermitage. Other paintings were exhibited at the Berlin Academy. Both the Abbey in the Oaks and the Monk by the Sea, shown there in 1818, were bought by Frederick William III at the fifteen year old Crown Prince’s request. Their innate romanticism, allowing for release and adventure, makes it easy to see why these canvases exerted such appeal upon an adolescent heir apparent.

Romantic images such as Monk by the Sea continued speaking to successive generations, a sense of high drama conveyed by a single figure open to the echoing sound of the seas, the water’s motion mirrored by the sky’s. The absolutes of radical, rocky foreground and tragic isolation come close to the dramatic agony of a Munch canvas or to a massively moody theatrical project by Gordon Craig. The monk, according to Albert Boime, is Friedrich himself, in Capuchin garb, walking the cliffs at Rügen, high above the sea. That elevated site is near a poor fishermen’s chapel, built by the Protestant mystic Kösegarten, so that those men, their calling the apostles’, could profess their faith though far from home.

Least known of Friedrich’s works are his small, surprisingly sunny views, conveyed with crystalline clarity. Landscape with Windmills (Schloss Charlottenburg) of 1822-23 shows how much the artist learned from Dutch painters of the seventeenth century (especially van de Velde), in terms of a bold mirroring of sky and water. Caspar David’s canvases also convey his pursuit of cloud studies, his own, not those then advanced in England by Luke Howard and so closely followed by Goethe. Friedrich was repelled by such intrusive, reductive cataloguing of natural phenomena, rejecting the new science as one that would diminish his pictorial poetry and reduce his key role as Nature’s interpreter…

Though snow was first popular in European landscapes with those of the sixteenth and seventeenth centuries from the Lowlands, Friedrich saw it in a new light, close to silent death or miraculous rebirth – never as a rococo confectioner’s seasonal sugaring. Fog in the Elbe Valley has the delicacy of Chinese painting on silk in its silent capture of rolling mists. Antlerlike bare branches grouped in the foreground suggest a flock of deer.

Friedrich’s people are often portrayed in a rapt, Brontëesque contemplation of the mysteries of their own passions as reflected by water’s moonstruck rise and fall, extended by the passage of time and tide. His seascapes combine intimacy and grandeur in unprecedented fashion, their contrast between the individual and the infinite seldom sogging into cliche. In the surreal Two Men by the Sea, each viewer is the other’s clone, twinned in Burkean or Kantian confrontation of the Infinitely Sublime.

Trade and manufacturing now enabled Germany’s nation states to begin rivaling world powers’ markets. Though Friedrich’s Greifswald Harbor of c. 1818-20 teems with sailboats, true too for his View of a Harbor, these have no such overt message of new German maritime success. To the marine genre, long popular among Dutch and Flemish masters, Friedrich adds a haunting sense of mystery, one not far from the worlds of Melville and Ryder, as seen in the German’s Seashore with Shipwreck by Moonlight. His more optimistic seascapes anticipate those by the later New England Luminist, FitzHugh Lane.

Among the first of later artists to wring such resonance from a back view, Friedrich followed the Dutch Little Masters who had used that pose long before, one found titillating or daunting for its challenging inscrutability. Seen from the rear, the subject of The Woman at the Window is the artist’s wife Christine Caroline (1793-1847), to whom he had been married for five years when she posed for this canvas. Is hers a yearning for escape aboard the boat whose masts rise behind her, a would be stowaway from proto lbsenian domestic drudgery, seeking relief from a depressive, wildly jealous mate? Or is she contemplating supper? As Christine’s are the canvas’s only curves, all those rigidly enframing lines assume commanding interest, such as the cruciform intersection of the window panes overhead.

As shown by Georg Friedrich Kersting, Friedrich’s looming easel and canvas, seen from the back, dwarf and corner him the way young Rembrandt’s did in an early Self Portrait in His Studio (Boston, Museum of Fine Arts). Canvas and easel, acting in concert, may dominate Kersting’s vision and creation. Such potential conflict between the artist and his work is a powerful Romantic conceit.

His later years were unusually hard for Friedrich. Goethe loathed his ever more allegory freighted canvases, telling Boisserée they were best suited to destruction. With the new fashion for the archaizing, Italianate neo-Catholic Nazarenes, for the intricate anecdotage of Dusseldorf, for the and Poussin cum Claude pretensions of a Joseph Anton Koch, Friedrich witnessed his increasing marginalization, never receiving the high Dresden post he had hoped for. Attacked by a stroke in 1835, the artist was unable to paint, dying five years later. Friedrich’s students include Karl Blechen, and Karl Friedrich Schinkel, who, with Dahl, continued his personal yet cosmic musings.

One of the few landscape painters to see both forest and tree, Friedrich found no conflict between the separate splendors of the individual and the collective. That rare pictorial capacity makes his Nature so persuasive and original. Following Rembrandt and Ruisdael, the German painter often used a single aged or lightning struck tree to speak for existential hazard. Centrally placed, a tree provides a melodramatic silhouette filling most of the surface of Couple Watching the Moon. An oak tree in the snow becomes an obelisk, another sturdy monument to death’s denial, or – in Nazism’s phrase – to the Triumph of the Will. Here the heritage of Nordic heroes of yore, living on as an aged trunk of the tree sacred to Wotan, sends out new branchlets despite its shattered state. The disaster blasted Solitary Tree of c. 1822 – pendant to a Moonrise by the Sea – seems arrested in dance. With distant oaks as its corps de ballet, the central tree’s solo is reflected by the trapezoidal pool below. Here a mixture of animation, mimesis, realism, and fantasy anticipate the dubious blessings of Disney.

From: Colin Eisler, Masterworks in Berlin: A City’s Paintings Reunited