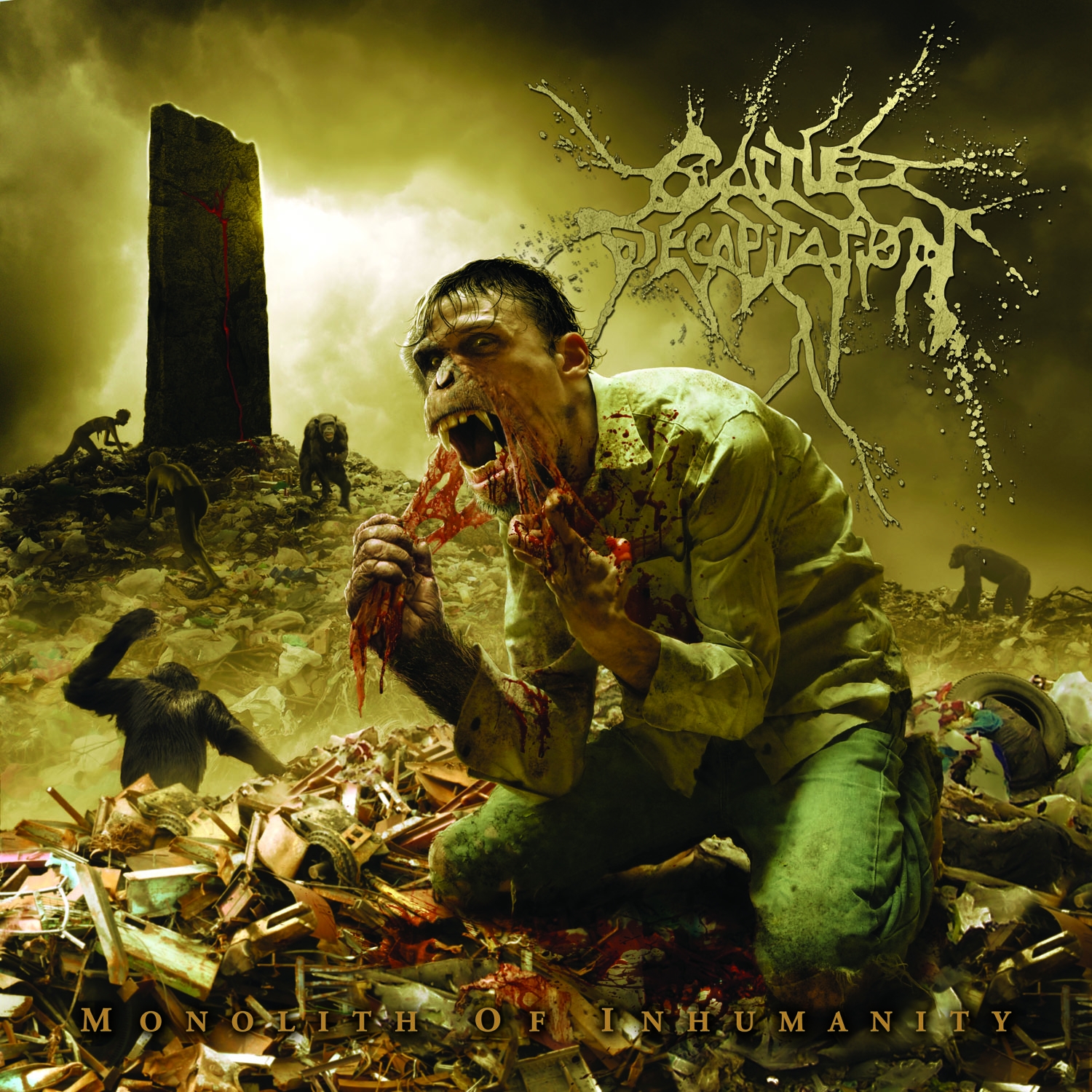 Originally founded in 1996, Cattle Decapitation’s songs protest the mistreatment and consumption of animals as well as the abuse of the environment. Lyrics may also focus on subjects such as misanthropy and genocide of the human race. Much of their music is based on putting humans in the situations that animals are subjected to (animal testing, slaughter, etc). CT latest release “Monolith Of Inhumanity” revolves around a central concept, build upon the band distaste for contemporary civilization and the damage wrought in the name of progress.

Cattle Decapitation: Hello and thank you.

HMA: Last year release “Monolith of Inhumanity” marked the sixth addition to your carnivorous repertoire. How has the responsive been so far?

Cattle Decapitation: Incredible. So much so that we are putting a halt on touring and going back into our rehearsal space to start writing a new one. We’ve done alot of touring already for this record and the response to Monolith really lit a fire under us and now all we can think about doing is writing music. The biggest inspiration for the next one will have been the fans.

HMA: What track on the album are you particularly proud of and of course why does it deserve so much our attention?

Cattle Decapitation: I’d have to say Kingdom of Tyrants with the Monolith intro. Its such a brutal song and the intro was a big time stretch as it shows a completely different side of us. The video for it, our first one out of three with director Mitch Massie was outstanding and unlike anything in this genre in my opinion.

HMA: I believe a graphic music video was made for “Forced Gender Reassignment”, directed by Mitch Massie. What’s the video about?

Cattle Decapitation: It’s about revenge. It’s always about revenge. About visiting that side of human nature that is repressed because of Christian values. Really though, its mostly about taking someone who doesn’t understand that there are people in this world who are different than them and forcing them to be and feel differently than what they’ve always known to be. As far as its shocking nature, that just comes with the territory when your band name is fucking Cattle Decapitation of all things. It’s an extreme music video for an extreme band with extreme lyrics. All it is are the lyrics put up on the screen, essentially.

HMA: I believe it was rejected by the social media channels due to the inevitable scenes of gore and sexual violence. Will we be able to experience perhaps a more tone down version? Or fuck it?

Cattle Decapitation: Nope. Fuck it. Fuck them and fuck people who forgot that this kind of music sometimes has graphic imagery that might make them actually feel something. I’m glad people have a repulsed reaction, maybe there actually IS some hope left for this world.

HMA: Mini films “The Monolith” and “Kingdom of Tyrants” have been produced for “Monolith of Inhumanity”. What’s the story behind them?

Cattle Decapitation: Its directly related to the album’s theme and what’s on the cover. What life could be like many, many years down the road if we continue our course of unabashed and unchecked consumerism, development and destruction.

HMA: It seems quiet complex and well made. What was the production like?

Cattle Decapitation: I have no idea, we are in California and they are in Indiana, which if you know anything about that area, is a bizarre reality because that area is not exactly on par with our ways of thinking. I know this though; the guy does almost everything in his basement. Fucking insane.

HMA: Moving to your artwork. What process and level of collaboration do you have with the graphic artist?

Cattle Decapitation: A lot actually. This time he agreed to just do the idea that I gave him to the best of his ability whereas usually I give him the idea and he gives me his interpretation which, luckily for us, has always worked in our favor as far as delivering amazing art goes. I always say that the best way to get the best possible art from the artist is to consider them the extra member of the band and let their feelings and input be just as important as your own.

HMA: Who is responsible for artwork and did you play an active role in development?

Cattle Decapitation: Wes Benscoter is the artist and him and I worked closely on the idea I came up with. I run all this stuff by the band and as long as I don’t hear any groans, we run with it. I have a great relationship with Wes and we are proud to have him on board doing our art for our albums.

HMA: Grindcore has a really bizarre mix in content… Is part humor and part extremely foul? Are these extremes what make it so attractive? Not for everyone of course!

Cattle Decapitation: Screw everyone. The ones that get it are who count. With a name like ours, we’re not going to really be injected into the mainstream anytime soon or ever so we do what we want in the way we want to do it.

HMA: Your take on the music and lyrical subject is “animal supremacy”. Why is this important to you?

Cattle Decapitation: More like anti-humanity. But again, alot of our lyrics have to do with revenge. I guess because its a great topic to introduce into death metal. Its pessimistic, its narcissistic, its mean and hateful. Its very much NOT a hippie sentiment but the lyrics are coming from almost a sympathetic standpoint of the hippie’s plight. Just done in a very unforgiving way. Why? I don’t know, I’m just weird I guess.

HMA: What does Cattle Decapitation have on the plate for 2013?

Cattle Decapitation: We did a LOT of touring and now we’re just going to stay home for the Fall and Winter and write as much as we can!

HMA: Thanks for joining us!

Cattle Decapitation: Thanks and hopefully see you sometime next year!!!