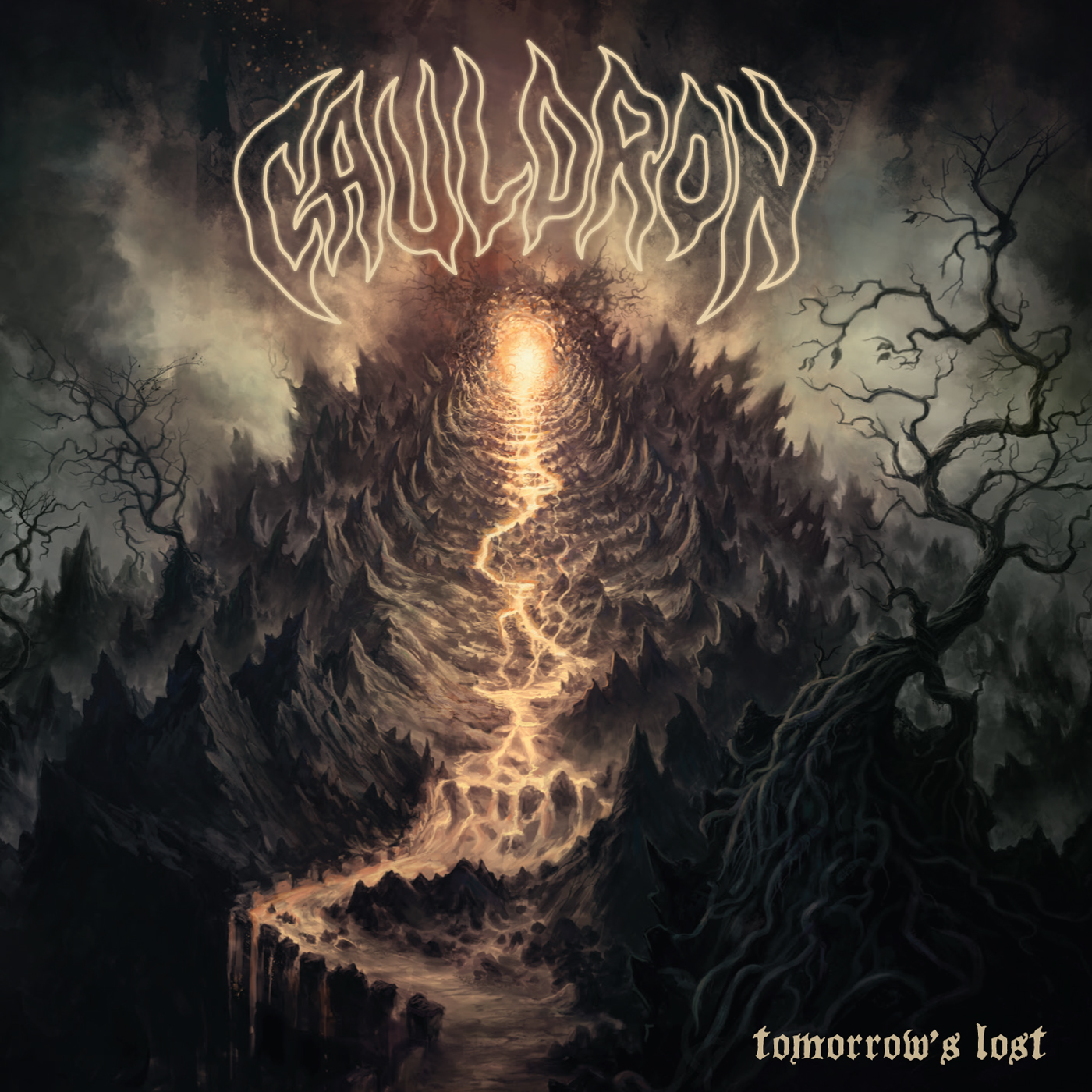 Recently toured in support of their third album ‘Tomorrow’s Lost’, Cauldron is the nostalgic power trio that has been bringing back the classic sounds of NWOBHM and 80s US thrash with a meatier twist. With not a bald patch or wrinkle in sight, these youthful sleeveless shred bandits have sprung from a time machine in 2006 and ever since have been consistently hammering out riffs every bit as bombastic as their album covers. Alex Milazzo chats with them about the artwork, videos and music, past and present… and a legend Thor, in Jason’s kitchen.

HMA: I want to start by asking about your NWOBHM style. You probably have a lot of older folks saying “I’ve heard this before, years ago…”

Ian Chains: Yeah, but not just that though. But yeah…

HMA: Is this something you guys feel comfortable with or are you now sick of hearing it?

Ian Chains: Well, of course, we’re influenced by a lot of those bands, but I think the new album thing is over-exaggerated you know. I’m probably way more into US metal and the early Metal Massacre stuff and probably more into German metal too, like Gravestone and Stormwitch.

Jason Decay: I think it’s just ‘coz I wear an Angel Witch shirt every single day, so maybe that has something to do with it. I mean, yeah, sure there could be a bit of that influence.

HMA: From an art direction point of view the first album cover suggests NWOBHM… What do you think about that? Do you get the same feeling as well? Was that your intention?

Ian Chains: No, it wasn’t our intention. Our intention wasn’t anything really. I know for ‘Chained to the Nite’ we wanted a girl on the cover. Our original idea was to have a girl in a dark alley and she was looking scared and beautiful and we sort of gave that concept a go. We tried to shoot it on our own but it didn’t work out so we gave the concept over to Earache and they shot it here and they just ripped the clothes off some chick and put the chains on her.  [Laughter]

Jason Decay: We weren’t actually there for the first two album cover shots. Those were done here. And then for ‘Burning Fortune’, we were going for a painting but the concept wasn’t all that together so a friend of ours from Carbon Dioxide magazine- Phil, he came up with the concept of ‘Burning Fortune’ and again we just handed it over to Earache and they just shot the cover and we went through a bunch of photos and picked one we liked. The new one, ‘Tomorrow’s Lost’, was directed between the artist and us.

HMA: I believe the man behind the cover of ‘Tomorrow’s Lost’ is Todd Kowalski from Propagandhi, it’s a great piece of art and a departure from ‘Chained to the Nite’ and ‘Burning Fortunes’. Can you tell me how the concept and relationship developed?

Ian Chains: We had seen artwork for a Sacrifice/Propagandhi seven-inch split, and we really liked the artwork for it.

Ian Chains: Well that was part of the inspiration behind it… No, a cross between that, between the first two Entombed album covers – those where pretty inspirational along with the first Angel Witch album cover and the second and third Candlemass covers, too.

HMA: It’s great that you guys are aware of what’s going on – not with just metal bands but artists from the past.

Ian Chains: Well, Entombed ‘Clandestine’ is one of my favourite all time album covers and is cool we have something that is like that.

HMA: Was that intentional, to be more contemporary and not just stuck in a past era?

Ian Chains: No, we didn’t care. We just go straight for what we liked. We really wanted a painting and that was pretty much the thought. We weren’t even supposed to do the chick twice in a row. We didn’t want to run the same cover three times, and then she would have become a mascot.

Have you ever seen the cover of our EP?

HMA: The illustration? Yes, it’s very good. Who is the artist?

Ian Chains: That was a guy from Vancouver; he’s actually an illustrator on a TV show but… It was a bit too cartoony for my liking. That’s all we really had to work with back then. Whoever was willing to do something for free for us, so it was on low budget.

HMA: How about your previous band, Goat Horn? How did that come apart?

Ian Chains: Well it was a band with my old high school friend basically. We were friends first and then trying to maintain a professional relationship. I don’t know… we just grew apart musically I think. Maybe Brandon didn’t, I was sort of in charge of the band and you can’t have two leaders right? Yeah, we were really butting heads on ideas for the band, we wanted the next album cover to be a broken CD case and I just thought that was fucking stupid.

HMA: How would that work on a record?

Ian Chains: [Laughter] Anyway, so we are still friends. We had a bit of a blow up but he is still into the band and still into making a new record, but he completely did not show it at all. He put all his energy into his new band at the time. So, we just had a blow up, we had a fucking fight pretty much on stage after a show.

HMA: You were signed to a major were you not?  EMI Canada?

Ian Chains: No, no, that was a joke. [Laughter] We were completely independent.

HMA: A note on your music videos, there seems to be elements of 80s nostalgia as well as real life scenarios. On ‘All Or Nothing’, why did you burn your own record?

Ian Chains: We wanted a video that stood out. We could not just do a performance video. We wanted something with replay; something that people would say, “oh, check this video out.” Spread it around, something that was entertaining. There’s a lot of competition these days, especially with YouTube so we wanted our video to be original, have some content, not just performance. So you ask why we did it…

HMA: Yeah, why burn your own record?

Ian Chains: It was a bit of foreshadowing for the end of the video where we all die. I just thought it was really funny, it was not in the video but when I watched it I laughed. Like, who needs this anymore? No one is going to make it out alive. All those records got burned, by the way, all the ones we flick through, that did not make the cut.

HMA: So what are your plans? Your latest record came out in October, what has happened so far? Apart from this tour, of course.

Jason Decay: We finally had a video come out around the release date, or sort of close to it, and we are touring right away. We didn’t get to tour much for our last album. We did a little Eastern Canada tour and now we are here on this tour.

HMA: What are your expectations?

Ian Chains: Nothing. Just have a good time. If you have expectations you are setting yourself up if there is a problem. If you aim low, then anything is a bonus.

Jason Decay: You cannot play in a metal band and have high expectations.

HMA: Last thing I wanted to ask is, did you and Jason really play with the legendary Thor?

Ian Chains: Yeah, [me and Jason] are both in the band.

HMA: What happens when you go on tour?

Ian Chains: He hires local musicians to tour with him. I came down into my kitchen one morning and Thor was just randomly in my kitchen making coffee and I didn’t know he was even staying at my place at the time. He just shows up once in a while.

He calls Jason ‘Son of Dorf’ where Myles lives… watch out Myles, you might see Thor in the kitchen.

Thanks guys, it’s been really good chatting with you.

‘Tomorrow’s Lost’ was released in October 2012 on Earache records.