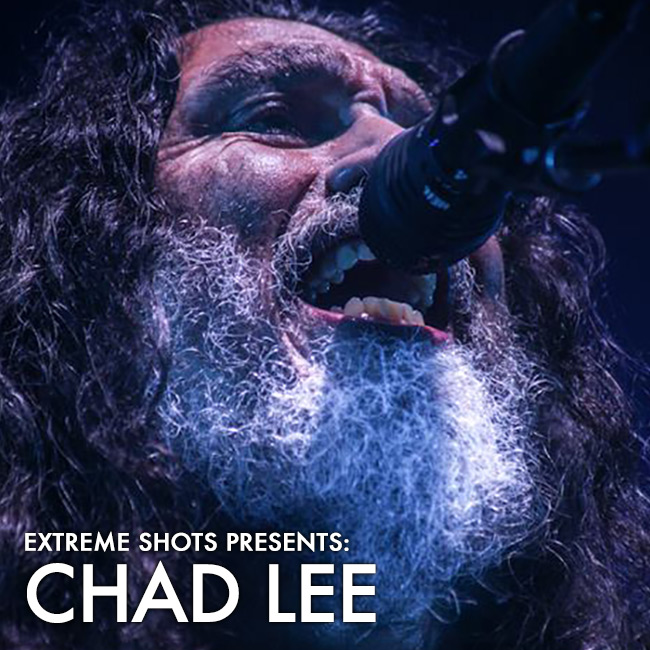 If you go to Hard Rock/Metal shows regularly, it’s very probable that you’ve seen veteran photographer Chad Lee capturing stills of some of your favorite artists. Some of these include SLAYER, METALLICA, BLACK LABEL SOCIETY, MACHINE HEAD and many others. Although live photography has been Lee’s forte for more than 15 years, his resume also includes a lot of promotional and editorial work. These days, his images seen to be everywhere and believe it or not, he’s already booked for most of 2014 and looking forward to 2015.

In an exclusive conversation for Extreme Shots, he gave us a extensive recount about his career so far.

Heavy Music Artwork: When/How your interest in photography started? Did you ever have any formal training?

Chad Lee: My mom has always taken photos of everything since I was a little kid, family gatherings, holidays, vacations, etc., and I kind of followed and did the same thing. As a teenager I was the one in our group of friends that would take pictures at parties, jumping our bikes and skateboards, beach in the summer, our cars, and always snuck one into concerts. I just had no idea back in the 80s that it would some day be my career. The first time I remember taking pictures at a concert was in 1984 KISS during the Animalize tour. My mom had a friend that worked for KISS at the time, and I had a little Kodak disc camera, 10 years old, standing on the side of the stage taking pictures, much like I do now 30 years later.

HMA: At what point you realized you could make a living doing photography professionally?

Chad Lee: In 1998, I was a carpenter; building custom homes in the Chicago area. Pounding nails on house from 5000 sq. ft. up to 15,000 mansions. Summer days on a roof could be over 100, and in the winter we would work until it was -20 degrees before they would let us go home. I made great money and it was good work, but on those extremely hot and cold days i always found myself thinking” there’s got to be a better way.” I had been taking pictures casually still as a fan at concerts, and in 1998 I met then Marilyn Manson guitarist John5 (currently Rob Zombie). We traded Kiss posters and got to become friends. One day, I shared with him some of the photos I had shot of KISS from my front row seats on the reunion tour, and he said, “Dude… Your really good at this, you should do it for a living.” At that point I had NO idea HOW I could possibly make that happen, but one thing led to another, and here we are today. I have since in the past 15 years photographed numerous CD/DVD covers, magazine covers and features, t shirts, video games, posters and so much more.

HMA: Was it Rock/Metal photography a natural choice for you as a fan?

Chad Lee: There was no choice; I have been a KISS fan since 1977, obviously the visual side of them appealed to me and the rest of the world. As I grew up I was into bands like Motley Crue, Wasp, Ratt, Ozzy and everything along those lines, all of it heavy and rocking, AND very visual. I was always drawn to album artwork, and the imagery associated with music.

HMA: Do you remember your first paid assignment?

Chad Lee: First paid gig, I sold an image of Zakk Wylde to EMG pickups in 2002, that went on to be a poster, promo ad in magazines around the world, and the box cover of his signature pick up set. I went on to work for EMG for many years and photographed and became friends with bands like Slayer, Metallica, Slipknot, Stone Sour, and many others.

HMA: You’re well known for your live photography but you’ve also done promo shots. Which one you prefer the most? Is there any difference for you in the way you approach a live shoot and a promotional shoot?

Chad Lee: I love it all honestly. When I’m on the road i love to get out and photograph the cities I visit, including their zoos, and architecture. I’m a also a foodie and love everything about it, from growing my own in several gardens, to cooking, and eating all over the country, I also enjoy photographing all of that. While I have done several well known portrait type set up photo shots in a studio or on location, my heart and passion does stay in the photo pit and onstage with the artists capturing what they do that makes fans go wild.

Chad Lee: I have been a Canon user for the past 13 years, I shoot with a Canon 5D, awaiting the arrival of a new 5D Mark III for summer tour. While I do have an arsenal of lenses, my two “go to” lenses are a 70-200 2.8 and 24-70 2.8 L series glass is also the ONLY way to go. I stared out with Kodak cameras that included the disc camera, 110, and I messed around with Olympus for a year before settling on Canon for life.

HMA: Live situations can be very challenging, especially for Rock/Metal photographers. Do you have any particular anecdote about a dangerous situation you’ve been involved while taking photos onstage?

Chad Lee: It can, in fact, be dangerous for several reasons.  I always am very aware of my surroundings and know where my “out” is should there be an emergency.

A Slipknot show in Chicago back in 2003 in a small theater, the barricade between the crowd and the stage where we work at, came crashing down as the crowd pushed towards the stage, I literally didn’t think anything other than “GET OUT”. I climbed right up on the stage as the 9 guys were doing there thing all over the stage, and ran right past them and to the back of Joey’s kit, and when I looked out i could see, people still getting up from the floor. ALWAYS have an out, and know your surroundings.

Other scenarios I encounter, because of the relationships I have built and access I receive, have included sitting on a drum riser with artists like drummer Mike Wengren of Disturbed while there are 8 towers of fire going off 20 feet in the air, and it gets HOT! I literally had all the hair on my leg burnt off just from being close to it!

HMA: First and foremost, you’re a music fan. Do does it feel for you, to work with some of the bands and musicians you admire?

Chad Lee: I am still a fan, and I think that’s what still makes me love what I get to do, I still love going to concerts, and a fan of what I get to do, and the people I have become friends with and continue to work with. My friend the late Jack Nau of EMG pickups told me many years ago “once you are no longer a fan, this becomes a job.”

HMA: Can you mention some of the bands/shows you have enjoyed the most to photograph?

Chad Lee: Slayer is one of my all time favorite bands ever, in 2012 on the Mayhem festival I had the honor of photographing my 100th SLAYER show! But it still goes back to the visual part of it for me, and bands like Kiss, Rob Zombie, Avenged Sevenfold, Gwar, etc. bands with big productions are always fun to watch and shoot. Other bands I Love shooting include bands like Machine Head, Hatebreed and Devildriver, bands that bring so much intensity and energy to the stage and get the crowds really moving and into the show. Watching and capturing the power transfer from stage to crowd still excites me.

HMA: Nowadays, anybody can take a photo with a cell or a tablet. Somehow, people don’t realize that photography is a specialized form of art and that photographers and still extremely important. What’s your opinion about this? Will the role of the professional photographer decline in the future?

Chad Lee: It’s true, everyone with a digital camera and a web blog is a “faux-tographer” these days, people are willing to shoot shitty photos with average equipment and give it away just to “be close” to “rock stars” and feel part of a scene. The market has been flooded with a lot of fan/photos that feel entitled, and what everything handed to them. They don’t want to do the foot work, and want access on, and offstage and if they don’t get approved to shot a band- they get jilted and won’t bother going to see a band if they have been denied. That is NOT being a fan, and they don’t get it. There is an art to doing this for a living, and as big as the industry is, it actually is a small family.

Chad Lee: That’s hard to say, there have been so many. The first time I ever had a photo in a magazine I was blown away, same thing goes for getting a cover, a poster, then a book cover, and then actually being in a magazine myself. Having taken the image that is now known, as Dimebag Darrell’s memorial photo is one that will always be special to me. It has been used for memorial shirts, posters, and even the 3d bust of Darrell that hangs at the Rock Walk of Fame in Hollywood was based on that photo. It hangs next to legends like Randy Rhoads, Jimi Hendrix and will be seen by millions of people for generations to come.

HMA: Is there a place in the web where people can see more of your work or even buy some fine prints?

Chad Lee: I have a brand new Facebook page that is up www.facebook.com/chadleephotography, and an all new website currently being designed, that should be online May 1. www.chadleephotography.com

It will have a daily blog, road updates, archives, and a store where you can purchase shirts, calendars, and prints directly from me. I also do a lot of charity work inciting the Ride For Dime Nashville event, and a few dog rescues. I have a lot of artist’s friends that sign items throughout the year specifically for these causes, so there will be autographed items available as well. I am also on Twitter twitter.com/chadleephoto and Instagram as instagram.com/chadleephoto

Chad Lee: On April 25 headed to Jacksonville Florida to start the spring festival run for nearly 5 weeks. I will be joining Dimebag Darrell’s widow Rita on the Dimebag Hardware bus, for the run, and will be haloing out in that booth, meeting with fans, and helping with merch sales as well as shooting photos of all the bands performing – Welcome to Rockville in Florida, Carolina Rebellion, Rock On The Range, Rockfest and Rocklahoma. I am hone the month of June on and off, and then hit the road for my 5th year on the Mayhem festival, followed by Uproar and I’m back home end of September. Ride for Dime Nashville takes place early October, and before I know it, it will be 2015.

HMA: Any final words or advice for young photographers?

Chad Lee: Shoot EVERYTHING, people, places, animals, food, flowers, everything you can, perfect your craft by doing it often!