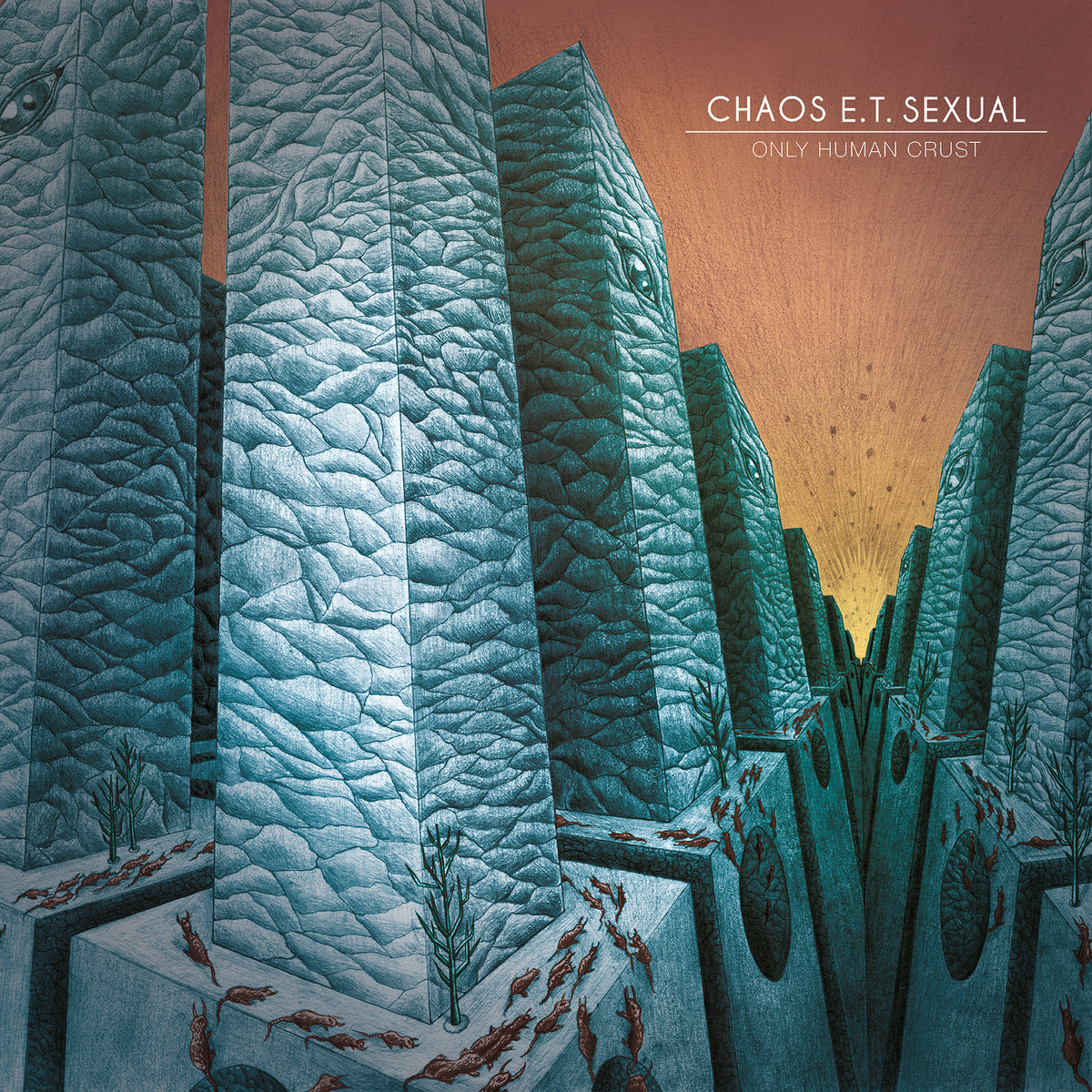 There are two explanations for that name Chaos E.T. Sexual, one official and one that is… unofficial and sometimes hide. But the last one is the true one and takes its origin from a Bolivian friend that was telling people that he got a relatively big belly not because he was drinking lots of beers (which was the case) but because he was having lots of sex. He was calling this phenomenon “callosidad sexual” (=sexual callosity). We thought it was characterising quite well the heavy (thanks to the guitars) but sensual (thanks to the industrial beats) music we had started to play together since a few months. Then, we just picked some words we appreciate so that our band name sounds like this Bolivian expression, and here it is Chaos E.T. Sexual.

The album title ‘Only Human Crust’ was chosen once the recording finished. The moment to find the last track titles, the song order, and the directions (or at least some ideas we associate to our music) we would transmit to Emgalaï Grafik, the guy we wanted for the artwork. The nine songs were drawing a story of a society oppressed by a cast of rich politics (embodied by the Poutine speech sampled for Gangsta Doom) that mentally manipulates people (Asile) and reduces them to slavery (1674-Now: Many Thousand Gone) by the use of modern technologies, surveillance means, or social inequalities. Some of the songs are more about the suffering people and their revolts (Tomorrow Prudence, Tumulte), migrations (Eldorado) and liberations (Solace Exhaust). The last song, which gives its name to the album, ends on a pretty sad note, with the sirens of oppression you can hear in the first song coming back to finish the album. But, whatever the outcome of the described class struggle, what will be left at the end is just the crust of human bodies and civilisation imprints.

Before starting Chaos E.T. Sexual, circa 2009, all the three of us were already friends, and Tarik played with Yves in a death-thrash metal band called Corrosive Elements (Thomas is now also a member of this band). We were spending lots of time listening to and discussing music together. Yves was working his heavy baritone sound. Tarik was already a beat-maker, and Thomas had some experience making noisy guitar sounds for post-rock bands. And one day came the idea of constituting a band together to play a mix of the heavy drones of Earth/Sunn O))) and the noisy hip-hop of Dälek, Techno Animal. This simple idea, coupled with our abilities and personal experience, led naturally to our band’s sound. Moreover, we shared (and still share) a lot of musical tastes, from old-school hip-hop (NTM, Mobb Deep) to thrash/death metal (Sepultura, Meshuggah, Napalm Death) or electronic music (The Prodigy, Scorn, Boards Of Canada). You will also find a bit of all that in our music. On the contrary, many people who attended our shows at our beginnings were citing Godflesh as a clear influence for us. However, at this moment, none of us was really into this band. We went deeper in the Godflesh discography and went to see them playing live multiple times following all these comments until we became fond of this band.

For the new album, a novel and vital fact to consider is that during the album writing and conception, the three of us were living together in a shared house that we call the Krust Church, which is still our studio and even the home some of us. There, we spent countless evenings listening to records as loud as possible. For instance, one year, we became utterly addicted to Type O Negative to the point of listening to it every day. We took each part of each album apart and sang each chorus religiously together in heart. So, inevitably, our new album has been impinged by that, particularly in how our songs are now built. Another example of recent but strong influence developed during these times is Killing Joke. We knew only the first albums, and we discovered the 90’s and 00’s album together at home. Lots of these albums (Hosannas from the Basements of Hell, Extremities, Dirt and Various Repressed Emotions) are wonderful. They have motivated us in trying more vocal things for the new album.

We use the sub-sub-genre gangsta-doom to announce our musical style. This unique term has been gently stolen from a concert promoter in Paris. He used it once to describe our music on a flyer, and we liked it as it was taking into account both our metal and our hip-hop roots. Thus, when people ask us what genre we belong to, we usually answer gangsta-doom; otherwise, we don’t think that we fit in any other predefined genre or style.

Concerning doom music, we are most receptive to bands that blend these sad smoky atmospheres plus slow riffs with other influences and styles. Type O Negative was a good example for that, but we also really love bands like Yob, Om, Mars Red Sky, Eagle Twin, … even if we are musically quite far from them. Actually, we mostly use the doom term to signify: slow heavy music with a taste for hypnotic repetition. Philosophically speaking, we position ourselves along the “do it yourself” side of the force, which is not opposed to doom but which is not necessarily the first thing that comes to mind. We want our music to be as accessible as possible for those who want to listen to it, see us live, or make us play even more if it is a support for a human or an artistic cause we agree with.

The vocals have not a wide role in our music, since the band began as entirely instrumental. Moreover, the introduction of vocals into our music was mostly motivated by a wish to experiment new tones and textures, and to possess a supplementary level for the dynamics of our songs and improvisations. Anyway, since we decided to add vocals to our music, we didn’t want the lyrics to be too silly. Our first song with singing parts, the title song of our previous album Ovna, was about a personal heart-breaking love experience. Some of the new album lyrics are also mentioning this kind of sad story and allude to the feelings you can undergo during these moments.

But, for the rest, the lyrics of the new album refer to things that happened or are happening in the world. As you could guess from the aforementioned album story, these are usually not happy things. The lyrics of Tomorrow, Prudence and Eldorado are for example inspired by the indifference and the intolerance of our society towards migrants dying when they try to reach Europa, for example when they undertake crossing the Mediterranean sea. 1674-Now: Many Thousand Gone is about slavery and the lyrics are actually picked from the slave chant “No More Auction Block (Many Thousand Gone)”. Finally, the lyrics of Only Human Crust summary our concerns, both about the personal and the global stories.

It is the first time we hear about this term “dark arts”, but this can indeed be explained by the fact that we come from France, and we use other words for equivalent concepts. Anyway, it seems to us that you refer to black magic and mystical practices, which is not something we are familiar with. The only thing that is close to these habits in our approach of music is the trance effect we are looking for by practising our art. This is something that is really one of the foundations of the project, inspired by the mesmerising moments we have experienced when attending for example to good drone or dub live concerts. In fact, we have some particular songs that have been designed to be extended during their live rendition. Thus, depending on the mood and on some practical considerations, we improvise, staying a long time on one pattern, allowing one (or several) of us to introduce some percussion or vocals that are not originally in the song. The goal is then to enter in an emotional and physical state where time becomes meaningless, and only the sensation remains.

French artist Emgalaï Grafik has made the artwork. We met him something five years ago when we played at the Doomed Gatherings festival in Paris. He told us that he liked the way we play industrial music, and when he showed us his work, we were very impressed. Thus, when it was the moment to think about Only Human Crust artwork, he was our first choice, and we were really glad that he instantly accepted.

While we let him carte blanche during the making of the work, we gave him many hints before so that he knew the roots of our universe and how we see our music. We made explicit to him the concept of the album, detailing the aforementioned story and suggesting that the revolt against the oppressive power could be illustrated by rats and explosions.

We also provided him with some pieces of arts that have inspired or that according to us match with the album atmosphere: Gustave Doré’s engravings, the movie ” La planète Sauvage » by René Laloux, the paintings of Zdzisław Beksiński, the works of Hayao Miyazaki. It happened that he was sharing a lot of these tastes and inspirations, so that everything went very smoothly afterwards. All his suggestions were in good agreement with our taste and thoughts, and while the artwork was getting close to being finished we were loving it more and more. The result is beyond our expectations, and the rendition of the raising as well as the one of the dystopia are really great. We prefer keeping some mysteries about what people will find inside the K7, CD and Vinyl editions, but other views of the contested world are displayed, and the atmosphere completes perfectly the music.