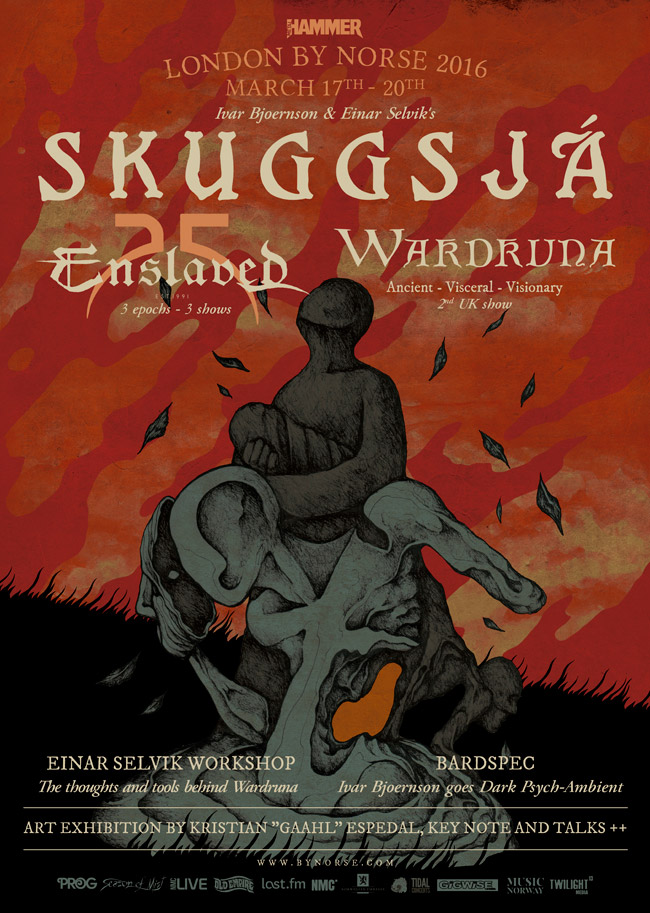 Commissioned by Chioreanu Costin who has worked with Roadburn Festival, as well as Ivar Bjornson and Enslaved on various projects, the pieces perfectly capture the essence and imagery of the periods they represent. What’s more, Costin’s involvement could not be more appropriate considering Ivar’s involvement as a curator at Roadburn Festival earlier this year.

March 17th-19th 2016 will see the band perform three unique and special shows in London, launching their ENSLAVED 25 anniversary. Starting with their early years, ‘Of Frost and Fire’ goes back to the roots of the band’s existence. Moving to the mid-period, ‘From the Runic Depths’ will explore the transition from old to new. Finally, ‘Spinning Wheel Ritual’ brings the audience to where the band is now: an essential and progressive artist firmly held in the esteem of fans and critics alike. All of this will take place at London’s ByNorse, where Enslaved and Wardruna’s captivating ‘Skuggsja’ composition will be brought to life by both artists in the climax at Shepherd’s Bush Empire. This special event also marks the launch of ENSLAVED 25: a year in which a quarter-century of one of Norway’s most revered artists is being celebrated.

Enslaved’s Ivar Bjornson has these comments about the shows:

Of Frost and Fire

‘This set represents the quintessence of Enslaved roots. From the legendary (even to us haha) MLP “Hordanes Land” with its soundtrack-esque musical longplayers, via the vast geomythological canvases painted on “Vikingligr Veldi”, the revolutionary “Frost” that lifted us out of the strict underground and finally the odd pair: “Eld”, which pointed forward to a progressive future, and “Blodhemn” – a Rundspringa of sorts; where we had a last blowout of Black Metal-tempos and inspiration. For anyone curious about where such an eclectic band like Enslaved came from, this will be a first-hand guided tour through the primeval landscapes that shaped us.’

From the Runic Depths

‘What happened between the early, cold and grim days and the modern-day dynamics and playful experimentation with past and present? This set will explain the unlikely yet logical transition from then till now. From the nightmarish flirt with Death and Black on “Mardraum”, the spaced-out balancing act that is “Monumension”, the milestone and futuristic beacon “Below the Lights”, the second break for the band “Isa” and finally the refined prog-vs-Extreme monument “Ruun”.’

Present day Enslaved is heavily rooted in both the first days and the so called mid-period. It is also a unique period for the band in itself, it stands firmly on its own. This is where the band wields together the dark roots with the psychedelic fabrics of the newer days – bringing to the surface the true potential of our song writing and musical abilities. The focus is the same as it has always been; to bring to life our personal vision of whatever “good and meaningful music” means to us, to create a vessel for atmosphere, deep association and simple enjoyment of music.

Tickets and more information can be found at:
www.bynorse.com

Never faltering, Norway’s iconic Enslaved continue to exist as one of the most dependable components in extreme metal’s indestructible backbone. Possessing the reputation as one of the most riveting live acts in metal, they never fail to offer us talent of the highest calibre, always doing justice to their signature extreme/black/Viking/progressive metal sound. Enslaved was formed in 1991 by Ivar Bjørnson and Grutle Kjellson releasing their first demo ‘Yggdrasill’ in the summer of 1992, their legendary mini-album ‘Hordanes Land’ coming out in 1993 with debut full length ‘Vikingligr Veldi’ arriving in the spring of 1994.

Their latest release ‘In Times’ was released via Nuclear Blast in March 2015 to global critical acclaim.