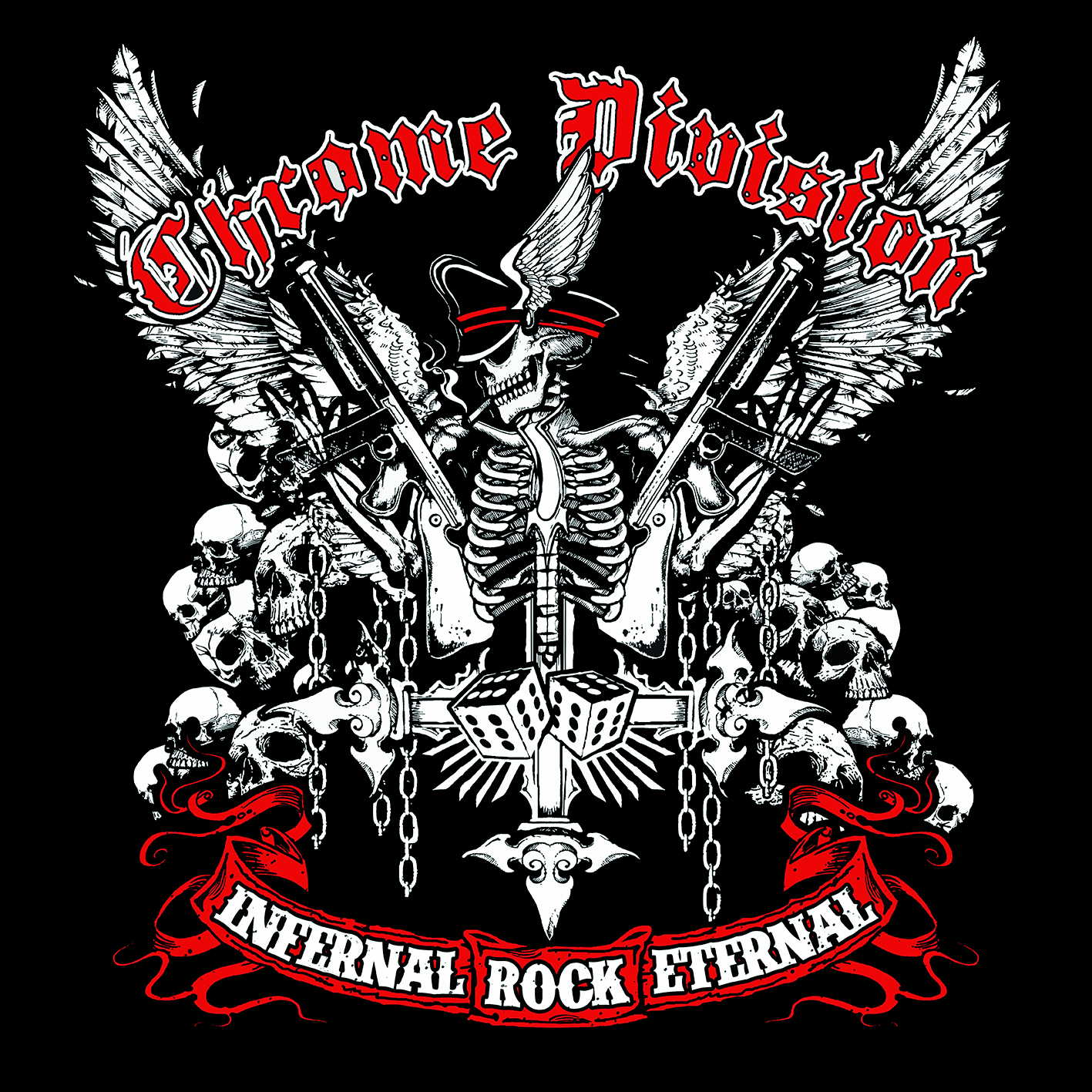 Tonight headline is at Maratona Rock with side project Chrome Division. Current lineup consists of him on rhythm guitar, along with Eddie Guz from The Carburetors as the vocalist, Ricky Black on lead guitar, Björn Luna on bass guitar and Tony White on drums. The band plays in the style of bands such as Motörhead, and draws heavily upon imagery from the motorcycling subculture. To date, Chrome Division has released three albums, Doomsday Rock ‘n Roll in 2006, Booze, Broads and Beelzebub in 2008 and “3rd Round Knock Out”. Chrome Division also released a music video for the song “Serial Killer” in an attempt to publicize the album, directed by noted Swedish director Patrick Ullaeus.

HMA: Hello Shagrath, and thanks for your interest in Heavy Music Artwork!

HMA: About Chrome Division, your latest record 3rd Round Knockout was released in 2011, when is the follow up going to be?

Shagrath: We have been working steadily for about one year now, with the new album and we have recorded half of it already in the studio, but we don’t want to rush anything, we take the time it needs to make it happen. We have also resigned with Nuclear Blast Records and we have just done our new video, which should be out by the end of May.

HMA: So are we going to expect the new record soon?

Shagrath: Yeah, actually we were thinking it will come out before, instead the album is going to come out later in the year as we have to fit it in with Nuclear Blast schedule but we are really excited it. It’s varied type of album with different guitar players from previous one, which also contribute to make a new fresh element.

HMA: Yeah, in fact I wanted to ask about a subject and a theme, is it going to be the same?

Shagrath: Yeah I mean it’s rock and roll music, simple, that’s how we want it to be. I created this band in the first place because I always have a have passion for rock and roll, I kind of miss it.

HMA: So would you call yourself black rock and roll or what?

HMA: Is it going to be a tour after this release?

Shagrath: You know we all our have our other bands and some people normal day jobs, families, kids and that kind of thing so I think it is going to be very limited to what we do. If we do, it’s only for small, selective shows, instead of going on a really long tour, I don’t think it’s going to happen but then hopefully we can do more shows then we have done before, I would like to do more festivals, maybe in United States with Chrome Division that would be great, but we have to plan everything when we are done with the album first.

HMA: Now about yourself, what attracted you in your career as a musician?

Shagrath: I mean it is totally natural for me from a young age, my dad is also a musician and I kind of follow his career as a musician so I’ve always grown up with an interest. I was more attracted to extreme metal from early age but it started with the Kiss for me first, which still today it’s one of my favourite bands (even if they have changed). I have started listening at the age of four.

Shagrath: I was more into the band for more the imagery and the look you know.  I was not so much into Iron Maiden; I was much more into Kiss or WASP and then I moved on to more harder stuff, like early heavy metal and darker side of music, something that was in there for me. I still have today a passion, but as we get older it is not just about metal anymore it’s music, it’s much more open-minded. In the car I listen to pop music, rock music, all sorts.  I find inspiration in other music bands.

HMA: Is there any album you are most proud of writing?

Shagrath: Do you mean over 30 releases, from 1993? That would be “Death Cult Armageddon”. There was like a sort of energy from start to finish point with mixing the song and all the recording features, when we started, that’s very close to my heart.  I never listen to it today though!

What do you think about the current black metal style and aesthetics?

I don’t really know if there is a scene anymore. Some bands have always been around in an original theme, they still create quality black metal music which I think is great, you know, that’s like Satyricon, Mayhem, Carpathian Forest. I still really enjoy and always buy albums, I think it is very hard to keep up with the new, I’m trying but it’s very hard, I have thousands of records at home.
I haven’t heard anything new in the black metal scene that is great for now, Swedish bands in their kind are probably one of my favourite bands, the way they do their music it’s great.

Shagrath: The title you know can be really interpretive, shall we say?  It’s not like pulling a rabbit out of a hat, it’s something deeper. The lyrics are more about the cult side of things, also satanic, it’s more of a cult album, I would say, concept for it, even though it is not really a full concept but most of the songs on this album represent changes, like ending some continuations you know, for how the band have changed throughout the years and we are also trying to rework titles but there is also time to change that now because of people have been in and out of the band or left, so it’s kind of a necessary time being to create an album like that, maybe I think the next one will be very different but we take our time now,  no pressure!

HMA: Well, how was it being playing live with a full orchestra and choir?

Shagrath: It was great, definitely one of the highlights you know, very emotional moment but everything worked, especially the Oslo show we did was really amazing, good memories.

It was like, like a perfect moment you know, sometimes I had to stop and think about it for a while, it was really amazing. Wacken was on a different scale, but it was very organised, a hundred people on stage, for a changeover of forty five minutes so it was a lot of details, a lot of team work but it was all worth it, was great.

HMA: What story and concept of the video “Gateways”?

Shagrath: I think it’s not really an easy concept to define. In a way it’s more like you interpret it the way you read it, it’s like you get your own pictures in your head when you read something or see something but every person finding things differently.

HMA: Okay, that’s it, thank you for your time Shagrath and for this interview with Heavy Music Artwork