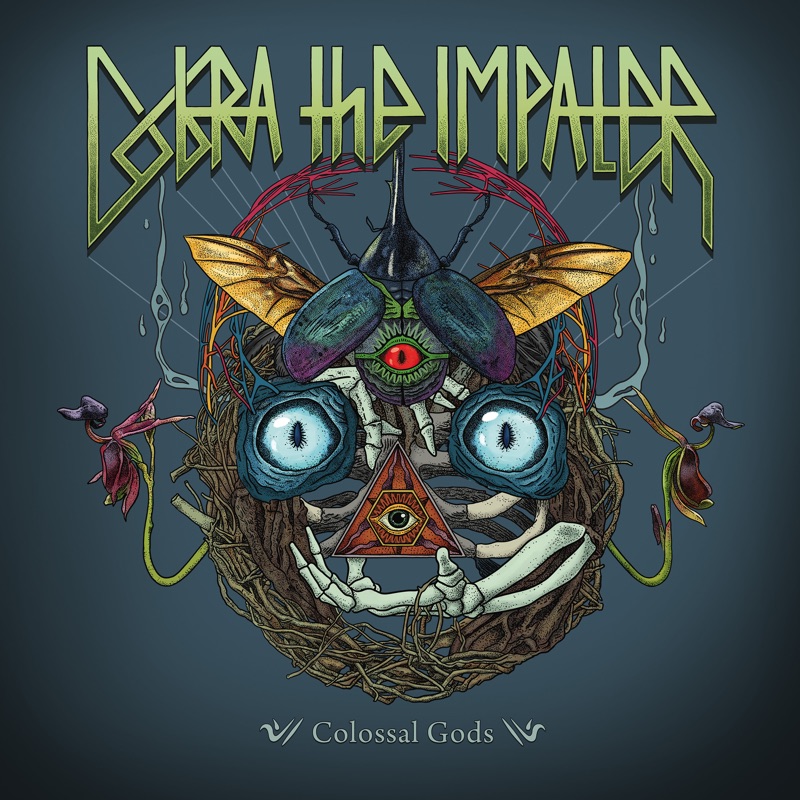 My name is Tace DC (Thijs De Cloedt). I’m the guitarist and founder of Cobra The Impaler and the primary songwriter. The idea to start Cobra originated a few years back. I played in the Belgian death metal band Aborted for almost eight years. I left the band and started a rock band, Horses On Fire. Besides metal, I also really dig rock music. We did some great shows with bands like Deep Purple, Status Quo, Band O Skulls and a tour with Rival Sons; the singer is amazing and left quite the impression on me. After a while, I started missing heavy music again. At that point, I realised I wanted to form a heavy band with more clean, melodic singing. Since I was a kid, I have been a big fan of bands like Judas Priest, Metallica, Megadeth, and Slayer, who have more clean singing. I think that we are lacking bands like this these days. Mastodon and Gojira are great examples of bands integrating more melodic and clean singing, but there should be more. I started writing music, and Dirk Verbeuren crossed my mind right away.

I know Dirk from the Aborted days. He played the drums on our third album Goremageddon. I was blown away by his skills and vision of music in the studio. Dirk liked the Cobra material and was in. I recorded all guitars and bass, and we recorded drums in LA. Mike Def and Manuel joined ranks as singers. I preferred the two singers because I love vocal harmonies. Both their voices are complimentary. I’m fortunate two have two guys like this in the band. Because Dirk lives in LA and plays in Megadeth, he can’t do shows. The band’s drummer is Ace Zec, who is also the album’s producer. He’s a talented guy and an amazing musician.

I am an animation director and designer, so I did all the artwork for Cobra myself. The artwork is really important; I even dare to say that it is equally important as the music. It’s a total package. The music is layered, and a lot is going on instrumentally. Also, the vocal parts are layered with a lot of harmonies. So I wanted the artwork also to be interesting, with a lot of details. The artwork is the personalisation of the music. I simply love details, music and art. The first single, Blood Eye, is also designed and directed by me. It’s nice to bring everything to life on the music.

When writing the lyrics, we initially wondered what the music evoked. It soon became clear that the music had to be supported by lyrics that evoked a certain gravitas without falling too much into cliches. And they needed to have an accessible feel to them. We soon came to the subject of the idolatry of natural phenomena, its dangerous power and personification. We

don’t see the record as a concept album, but these subjects function as a common thread through most of the songs. Concepts like: All-Knowing Sun, The Tyrant, Zero Magnet, the centre of the world, Demigods, Sun God, White Ghost, The Combatant, etc

I’m working on new material. I start riffing and mapping out ideas. I then start building sculpting a song. I send them over to the singers to sketch their ideas on those models when demos are done. Then we go back and forth, and I tweak the song structures according to the vocal lines. The drummer/producer Ace Zec is also involved in arrangements.

For me, music has to grab and though people. For me, a certain mood can help in writing music. I like writing in the fall and winter. When we work on ideas, we like to start in the evening and drink during the process. We always record thoughts, and sometimes I’m surprised by a drunk late-night session. Recording for real is an absolute no go, as it is technical.

I was 16 years old or something; some dude let me hear Slayer on his walkman; I was blown away. Upon today that album is still my favorite, being South Of Heaven. The aggression, the fierce drumming, screaming guitars. A fucking punch in the face. I also like Black metal a lot because it’s so goddamn dark, bands like Dark Funeral, Mayhem, Marduk, Emperor. I hate happy music, music should be dark and grimm. In my designs, I also like edgy comedy. Two years ago, I made an animated short movie, Ghost Eye, also some dark storytelling.

I strongly believe music units people. I think the way metal and music touch people is something we share amongst fans. Besides a joint passion, it’s also really entertaining.