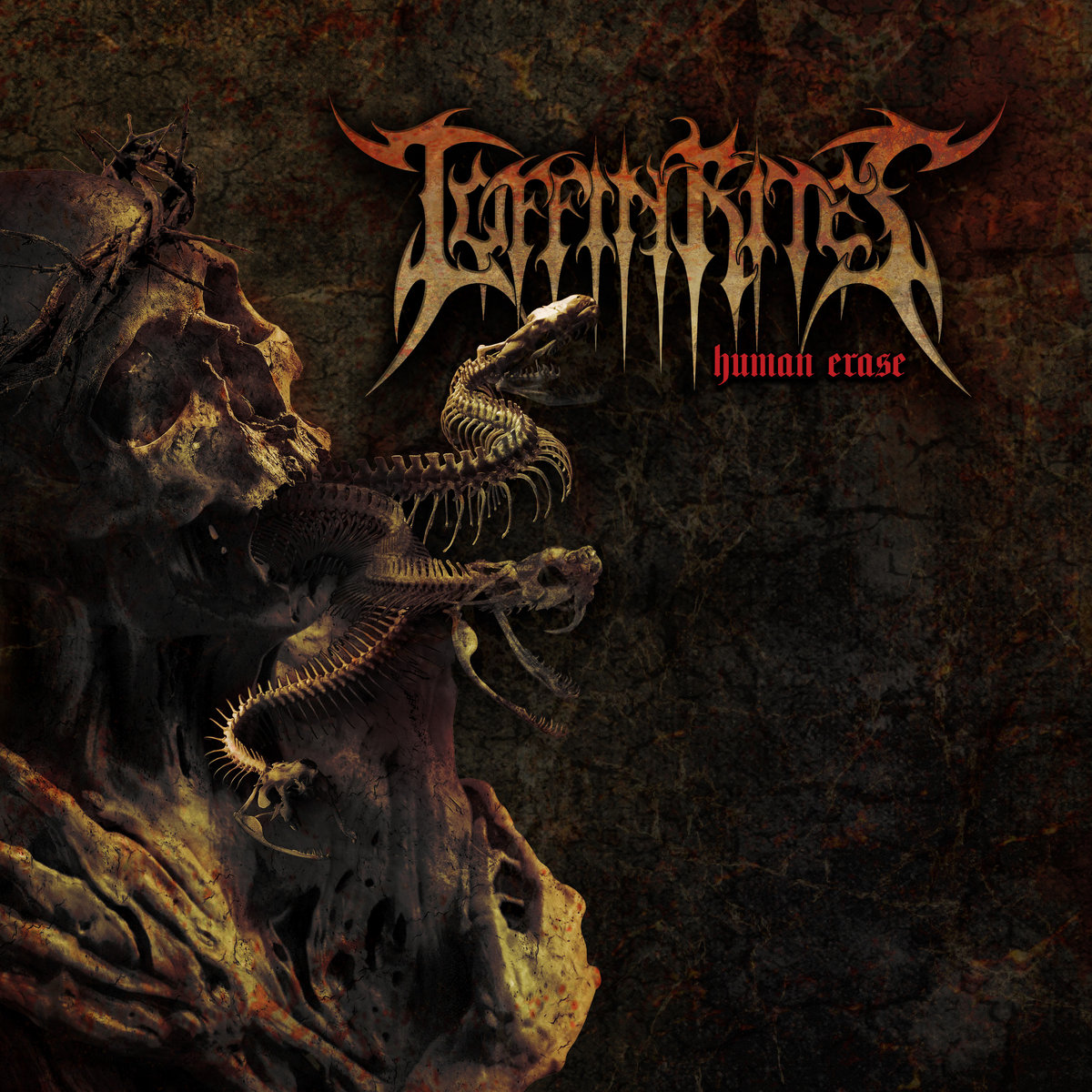 Coffin Rites is a Minneapolis-based death metal band currently touring and promoting their latest album, Human Erase, on FTWNU2 Records. The band derives its sound from influences across the death, thrash and black metal spectrum. The band has shared the stage with acts such as Nile, Terrorizer, Zao, Toxic Ruin, Wolf King, Putrid Pile, and The Chasm, to name a few.  For fans of Carcass, Skeletonwitch, Rotting Christ.

Our music is routed in death metal but has elements of all our influences from black metal, thrash and hardcore. We try not to have boundaries and just write music that speaks to us. If it’s genuine to us as musicians, we hope fans and friends will also feel what we are doing.

Our new record, Human Erase, was a unique process. We started writing it before covid and finished writing and recording it during Covid. Our long-time guitarist was also preparing to move, so we intended to treat it as a three-guitar player record project. Solos, leads, and rhythms are shared across three players, yet it still feels cohesive. As this record was more of a team effort vs our first record being songs that Erik (Zidek) wrote, it feels much more organic and more about all of us as musicians versus just a couple of folks’ influences. I am very happy with how diverse yet cohesive the album feels from start to finish. It’s a great snapshot of who we were when we wrote those songs. “Human Erase” is my favourite record I have been a part of to date. Recording in-house at my studio, 14:59 studios, offers much freedom. We can work at our own pace and try things without breaking.

Music and metal music have always spoken to me throughout my life. The process of creating something from nothing never gets old. It’s inspiring in itself to create with other people. The positives and negatives of the writing process are an ever-winding challenge. It’s amazing to hear a song the first time it is finished. Then taking it to a stage is another rush.

Music should be visceral regardless of the songs meaning or philosophy. Music execution should be expressed physically and listened to in a manner that is not casual. I have never viewed heavy music as background or music for the “I listen to everything crowd”. That’s not sound elitist or anything, but Napalm Death is typically not music for people who listen to pop radio.  Metal heads LIVE metal. With the type of music I gravitate towards, I care about the band, engage with the artwork, and read the lyrics; an album is an experience. It’s not just a couple of songs about how the band writes. Again, not speaking for Drew. I think anything about the dark side of life is on the table from a content perspective. Other than hate music or racist shit, we don’t want anything to do with that garbage.

I remember very explicitly being quite young (maybe 10/11). I was driving with my dad on a road trip and woke up from a nap fairly late. I heard this dark music coming from the stereo, and I asked my pop what it was, and he said, “Son, this is a heavy metal”. It was the Black Sabbath Paranoid album. From there, I gravitated towards heavier and heavier stuff. I started with Bay Area Thrash stuff, eventually getting into the Florida Death metal scene, then onto the European grind and death scenes. The formative bands and albums that stick out are, of course, the mainstays of Metallica’s “And Justice for All” and Megadeth’s “Rust in Peace”, but I think it was stuff like Carcass “Heartwork”, Suffocation “, Effigy of the Forgotten”, Morbid Angel’s “Domination”, Converge “Jane Doe”, Rotting Christs “Dead Poems” and the entire Napalm Death Catalog the officially brought me into the REALLY heavy stuff. These days my musical tastes are anything from symphonic and power metal to Pig Destroyer. If it’s heavy, I tend to appreciate it, at least.

Just imagine your life without music, and that’s all that needs to be said. Watching a movie without a soundtrack would be a dismal experience. I just imagine all the people I’ve met who are lifelong friends simply because I played music and enjoy going to concerts. Admittedly it’s not an easy experience or any straightforward endeavour. Van’s break down out of state, you have to make arrangements with your 9-5 to do the thing you love or see a concert from a band you love. You lose sleep and may miss out on family and friend stuff because you are off playing a show, but it’s worth it. Metal is not casual, and I am not a casual person. I don’t do anything half-assed, you know. That’s what’s great about metal in general. The people who play and the people who love it are dedicated. My CD collection is a library stage from 20-plus years of being a musician and fan! As I type this, I’m listening to music. It’s an everyday experience. I am just happy to be a part of this big metal family.