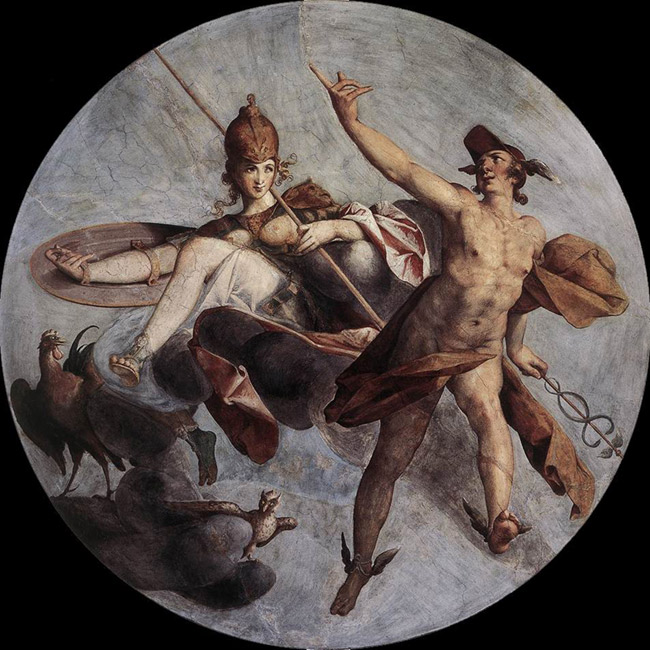 Perhaps no other term in the study of Western Esotericism is as messy as the term “Hermeticism.” Roughly speaking, the category has at its base a collection of texts preserved together, called collectively the Corpus Hermeticum. This collection is part of a series of texts that have come down through the ages from late antiquity Egypt. Other series of texts include the Sibylline Oracles, the Chaldean Oracles, and Greek Demiotic-Magical Papyri (often also thought to be especially close to the Corpus Hermeticum and the Emerald Tablet). What these texts share is a common intellectual ancestry. They were all a part of a radically syncretic cultural milieu in Egypt around and just after the birth of Jesus. This enviroment included Jewish influences, Greek, Roman, Neoplatonic, Sethian Gnostic, Valentinian, and Coptic Monophysite Christianity, as well as the remnants of an Egyptian wisdom tradition.

Roughly speaking again, the texts of the Corpus Hermeticum posit the descent of humans metaphysically from a non-material heavenly realm. By means of descent, humans have taken on material and fleshy bodies that are a hindrance to their true nature. By means of the understanding of the mind (gnosis) and perhaps some praxis as well, humans can re-ascend to their rightful place in the heavenly realm. The texts feature an emanational cosmology similar to Neoplatonism. In some texts the world and the Creation is good (Poimandres) but in others it’s not so good (4th,6th,10th letters). There is a strong theurgical component to several of the texts, including the famous Asclepius. God is best praised through the offering of hymns and mind, not material sacrifice. One of the texts recycles the famous Egyptian scene of the Book of the Dead with a healthy infusion of Plato. In the afterlife the soul’s material accretion is weighed by a demon—the heavier souls are resent into the clash of material nature. Unlike the B of the D, the soul is eternal, and can ascend at any time. This portion is very similar to Plato’s doctrine of reincarnation in the Phaedo. At least one text is even in the form of a Socratic-style dialogue. In these texts there seems to be a strong initiatic component, possibly involving ritual immersion and culminating in mystical ascent. The ascent described is similar to Egyptian wisdom literature and also early Jewish Merkabah (not Kabbalistic) Mysticism.

In fact Birger A. Pearson has argued that there are some very strong Jewish infusions in the Hermetica. The texts use apocalyptic language and phrasing in a very similar way to early Jewish and Christian literature. Chapter’s 29-32 of the Poimandres are even more or less taken from Jewish liturgical documents. In the Poimandres hymns of angelic devotion are used as vehicles for mystical ascent. There seems to even be a great affinity with the language and terminology used by the Jewish philosopher Philo, who is living and writing in Alexandria in this general time period. Ultimately Pearson thinks that the Poimandres bears a great resemblance to the Jewish apocalyptic 2 Enoch.

These ideas had a lot of impact, to say the least. Letters that date back to the 3rd Century claim that the alleged author of these texts, Hermes Trismegistus, has some kind of involvement or affinity with Moses, the Hebrew prophet and political leader. Other accounts claim that the author is also the Eqyptian god of wisdom, Thoth. No less a theologian than Augustine felt compelled to defend Christianity from what he saw as these demonic, magical texts. Others (like Lactantius) were staunch defenders of incorporating Hermetic influences into Christian doctrine.

In the revival of Platonic thought that occurred in the 12th century (which also saw an explosion of Christian mysticism, especially female) the Hermetic texts were again a main focus of inquiry. Translated by Marsilio Ficino in the 15th Century, the ideas within these texts began to permeate and percolate within Western Esotericism, influencing Pico della Mirandola, Giordano Bruno, John Dee, and Elias Ashmole, as well as Jacob Boehme, and the Rosicrucian texts of the Fama, Confessio, and the Chemical Wedding of Christian Rosencreutz, which themselves made a huge impact intellectually and politically in the Renaissance and development of modern science. No less than Sir Francis Bacon and Sir Issac Newton were investgators of alchemy and Hermetically- influenced thought.

I. – Main thoughts on Hermetica by chapter. Page references are to Brian Copenhaver’s translation and commentary.

The supreme mind is androgynous and gives birth to a “craftsman” [a demiurge]. The craftsman has domain over fire and spirit and created 7 governors…. …whose government is called “Fate.”

A created brother to the “craftsman” wanted the power to create as the craftsman did, and so asked and was granted this power. NOTE: In most Valentinian Gnostic texts, the figure of Sophia, who is charged with creating the Ignorant/Evil Demuirge, did NOT ask permission to create, but did so on her own. This is different. Thus Having learned wisdom and essence, he received permission to break into the “Vault.” The Vault seems to be an encasing or limmal [?] space between the different emanations. Thus breaking thru the Vault is a type of conscious and chosen decension (unlike many “Gnostic” texts).

The Brother gazed down at the water…Nature gazed at him and he saw himself reflected in the water of Nature. He was so full of power and creation that Nature loved him and he loved his reflection in Nature and so came to inhabit it….

Thus man is immortal and mortal. The body is drawn from the “hateful darkness” given from the nature of the water… that is why man is subject to fate even though he is also immortal. This is not punishment — death is simply a matter of the breakdown of material substance. The material water is the source of the perishable body because it exists in the farthest and weakest emanation.

Text 3 is another cosmogony Neoplatonic emanation story – Holy light of liquid essence set forth — Humans are created to master all things, to contemplate heaven, to be a witness to nature, to know the works of god.

Text 2 is in the form of a socratic dialogue.

Text 15 explains evil as a necessary consequence of degeneration — like corrosion on bronze – this is why god eternally recreates everything — to purify creation. God is not evil even though evil infects creation.

1) Consciousness is not uniform — some have not gained true understanding. 2) The twofold nature of man — the outward and the inward — both expressed and referenced to Greek language. A discussion of sex as secret and mysteriouos as justification for it as private, not public act, the expression of divinity, especially at Orgasm, should not be subject to public ridicule by the ignorant and the unlearned… the divine should not feel “shame” at others unenlightened reaction.

A repetition and usage of common afterlife mythos from Maat’s feather. The soul is weighed by the chief demon who sees if it weighed down with vice and ignorance. If so it is condemned to the clash of natural forces — the soul is already immortal so its punishment is eternal – but from the force of its own nature – not as punitive. If light, the soul is allowed to remain in places suitable to it. (84) A combination of the afterlife judging from the Egyptian Book of the Dead and Plato’s reincarnation myth from the Phaedo.

Animals do not have divine consciousness

Strong historical theurgy component. People fashion gods/idols and empower them to good and evil by trapping demons and angels within them. Yet power in the earth shines forth from the natural divinity of plants, stones and spices. God is best worshiped not with material incense but with thanks and hymnal praise (92,53) The Fates rule through the power of Necessity and Order.

II. – Van de Broek’s interpretation of Hermetism ( from Chapter 1 of Gnosis and Hermeticism) 1. A way of teaching that man can ascend above the fixed stars by means of a “way of Hermes. ”

2. Seems to be an emphasis on systematic instruction in this “way” culminating in a reception of gnosis thru initiation.

3. Some anticosmicism – in the 6th tractate, says that only the good in name exists among men – nothing really Good down here.

Also in the 4th tractate Hermes tells Tat that he cannot love himself until he hates his body – there is a distinct spiritual realm versus a physical realm. Like oil and water they cannot be truly mixed. The human must choose one, as they mitigate each other — the divine monad is stronger.

In 10th the creation is beautiful but not good

Each part of the cosmos has a demon that sows its own seed in that part – the prevalence of degeneration – 9th tract.

4. The human body is a beautiful and divine image – emphasis on continuous creation – but the soul is endangered in purely earthly existence, like Plato and the “Gnostics. ”

5. Emanation – all things are god — god makes himself for creation and recreation.

2. Very similar in form to popular Jewish apocalypse literature, such as 2 Enoch. But there is no solid evidence for Enoch and Hermes interactions before the fourth century- similarity could be a literary convention/cultural milieu thing.

3. Designations for God are same as terms used in Philo. Textual appeals to Earth-born men to “repent” are virtually unknown outside of Jewish/Christian materials of antiquity.

5. Usage of angelic hymns as vehicles of ascent are similar to Scholem’s observations regarding Merkabah mysticism.

6. But fundamentally the message is that “knowledge of God is really knowledge of one’s inner divine self.” A Hermetic message, not a Jewish one, in the final analysis.

7. Pearson suggests time of writing may be during Jewish revolt against emperor Trajan in Egypt. (115-118 C.E.)