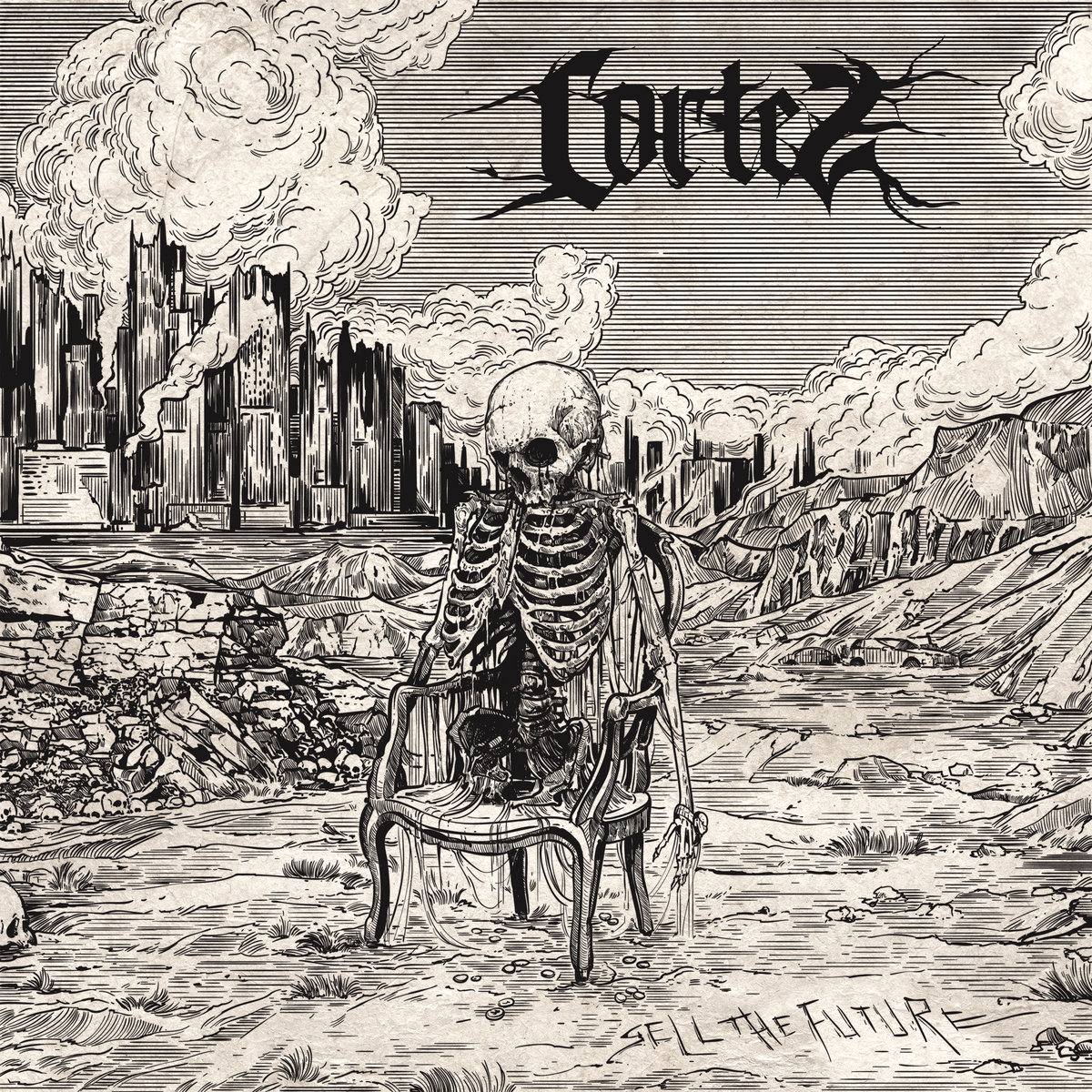 The future is fast, the future is sharp, and the future has already been sold, baby, so you missed your shot. Better luck next time. Boston heavy rockers Cortez have always embodied an underdog spirit, from their 2007 debut EP, Thunder in a Forgotten Town, through their 2012 self-titled debut LP and 2017’s The Depths Below, but they’ve never sounded as supercharged as they do on ‘Sell The Future’. With the precision of heavy metal, the soul of classic rock, and the unbridled attitude of a band who care less about your expectations than they do about writing kick-ass, drive-fast, dynamic, hugely-grooved, hugely melodic and expansive tunes, Cortez arrive at their third album with a well-earned sense of freedom in their approach. It isn’t about what style they play or the genre niche you want to fit them in — it’s about the crawling sleek of ‘Sell The Future’s title track, the crash of drums in ‘Sharpen the Spear’ and the urgency of songs like opener ‘No Escape’ and ‘Look at You’.

‘Sell The Future’ is a record of and for turbulent times, but its working themes aren’t so pointed as to sound already dated in the fast-moving, unending ‘No Escape’-is-right news cycle the universe seems to inhabit. The band has come into their own operating as the five-piece of vocalist Matt Harrington, guitarists Scott O’Dowd and Alasdair Swan, bassist/backing vocalist Jay Furlo and drummer Alexei Rodriguez; their dedication to classic, timeless rock and roll songwriting is unflinching.

After taking part in Ripple Music’s The Second Coming of Heavy split series in 2018, Cortez has pushed themselves even further with ‘Sell The Future’, finding a passion and instrumental fury that comes through regardless of tempo and makes their songs all the more memorable. Whatever the days ahead might bring, Cortez stands ready.

HMA: Give you a brief rundown of your profile?

Alasdair Swan: I would say our musical style runs the gamut from rock n’ roll to doom and traditional metal. Loud guitars with strong vocal melodies. It always starts with a riff. I want it to be something memorable and something that I could imagine Matt singing over. Cortez doesn’t have any hard and fast rules regarding what style of heavy we play, so for me, I don’t overthink it much beyond do I like it and can I remember it. After that, I take it to rehearsal, and we jam it together and see how far we can take it from there.

Matt Harrington: For me, when it comes to music or writing, there has to be a flow to it all, and every part should work for the betterment of the song. We try to push ourselves to try new things and expand the sound we are known for, but we’re also not afraid to be critical of that process and the song while writing. That said, we want to have fun as a group, work quickly and efficiently, and produce the best sounding record from the tunes we brought into the studio. We put a lot of thought into editing and re-editing the songs and a considerable amount of work into making them taut, sonically interesting, and occasionally challenging for the listener in terms of how we approach the various genres that make up our sound.

HMA: What kind of benchmark do you set as a metal band?

AS: Song-writing is my main driver. I want people to enjoy and remember our songs instead of just a riff or chorus here or there. With our combined influences and the sounds we use, it’s always going to have a degree of heaviness about it, so I don’t necessarily concern myself with whether it’s metal or not. But at this stage, whatever we play together is going to sound like Cortez.

MH: I think for us, it comes down to song craft. We are very critical of ourselves in terms of how a verse should build to a chorus, where the song should go if we’re veering from a standard verse-chorus-verse format, where to add flourishes and sonically exciting components, and whether a part should be edited down to make the overall song better. We don’t want any of our songs to sound like a collection of parts, and we want the individual components to work in concert with each other to make the song the best it can be. We like to think we keep that standard high for ourselves.

HMA: Do you have a favourite album cover from other bands?

AS: Leviathan by Mastodon and Arise by Sepultura.

MH: How do you pick a favourite? I have a few. Judas Priest – Screaming for Vengeance, Ulver – Shadows of the Sun (honestly a huge fan of most of their cover art), Earth – Angels of Darkness, Demons of Light I & II (again, big fan overall), Funkadelic – Maggot Brain, Black Sabbath – s/t, Bad Brains – s/t.

HMA: What things inspire you besides other music?

AS: Horror movies, folklore, poster art, and horror fiction. I find it fascinating the persistence of certain themes both temporally and geographically.

MH: Travel would probably be the biggest thing for me. Experiencing places and people who are different from me, the places I grew up, and where I live now is endlessly fulfilling and inspiring to me.

HMA: What can you tell us about your lyrics?

MH: The overarching themes of the record are that we live in a violent yet stagnant world on fire, our rulers and their masters are dropping the facade of benevolence, fascism and right-wing extremism are ascendant, the endgame of class war is in full swing, nationalism and tribalism are fiercer than ever, we have climate and ecological crises that have been escalating in front of us for decades, we have countless and still looming humanitarian crises as a result of all of this, and all the gods we created to save us have failed because we made them in our image. If there’s a story to the album, there is a way to move forward and beyond. We don’t have to buy the future we’ve been sold.