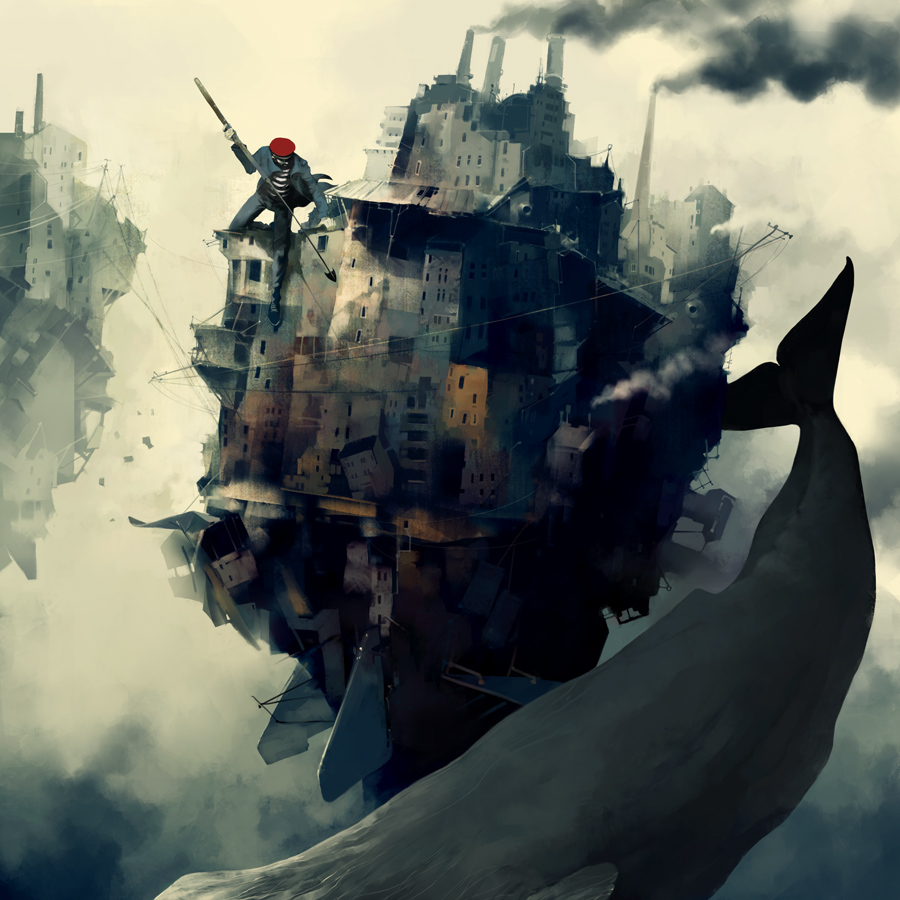 Like most people, I always drew as a kid and I simply never stopped since. I did study some art in my teens and early university years but it was mostly my family and the surroundings in which I was raised that influenced my tastes and triggered my curiosity for various expressive media. My father has been curating, for over twenty years now, a pretty unique art festival on the mountains between Italy and Slovenia, Stazione di Topolò – Postaja Topolove, which I have attended every summer since I was a kid. Stazione gathers a lot of experimental musicians and filmmakers so that was probably my real art school. I also grew in a house packed with comic books (mostly Italian and French authors from the 70-80, Moebius, Bilal, Toppi, Manara, Andrea Pazienza, Zezelj,…) and always considered drawing for a living a tasty option.

I have been professionally active for around 5 years now and my activity has drifted from generic illustration jobs to a dedicated research into live-storytelling and collaborating with musicians. I occasionally do some cover artwork for music bands but it is mostly the live and storytelling quality of music that attracts me. First of all, I am mostly a digital artist. I am experimenting a lot with traditional painting tools these days but it is a hard learning process for someone like me who never had a traditional painting training and jumped right into tablet & Photoshop.

With time I have become quite “painterly” and almost lost the feeling for drawing, for enclosing figures into a thin line. I was once obsessed with the delicate line work of Moebius or Otomo but I guess the digital tools have forced me to approximate the contours and focus on color and drama instead. Also, I usually paint with light into dark or even black backgrounds. This emphasizes a dark and dramatic feeling in my works and it is functional to my projected live-painting shows as the story grows out of the darkness and there it returns. Painting with light is a spectacular privilege of the digital medium.

Live-storytelling performances in collaboration with musicians and sometimes actors are my current focus. For these performances, the keys are continuity, fluidity, speed and again the digital tools allow me great results and portability. I have transferred my live-painting approach to more constructed and refined video productions that have been used for documentaries, museum installations, and theater scenography. For both live and “studio” works my setup is laptop + monitor + WACOM tablet.

When I work on album covers I often receive very precise directions and even references to other images. Most music bands obviously stick to well-established genre tastes and image standards.This makes my job easier as there is little thinking to do but it is quite castrating and -if the references don’t resonate with me- even frustrating to deal with. I prefer much more to be left alone with the music I have to illustrate and get my ideas and images straight from it. This happens much more frequently when I prepare live- storytelling shows as they are more about the collaborative effort than creating a commercial product.

I just love to create images and collaborate with other people who tell stories, whether they are visual artists, musicians, writers or just good storytellers. I am anxious to explore more collaborative possibilities and hopefully find new exciting techniques to convey those. Apart from that I take it pretty easy and try to enjoy my work wherever it takes me. I remind myself of how lucky and privileged I am to be making a living from drawing and not having to wake up every morning at 7. I am trying to keep alive the positive excitement that comes with working on new projects, the overwhelming obsession that comes with image creation and story development and to throw away all that useless self-inflicted frustration and “I-am-not-working-hard-enough” thoughts that used to haunt me. I am just drawing and painting, after all, not saving human lives.

The connection between drawing and music was always obvious and fascinating to me. As a kid, I watched over and over the “Qatsi” film trilogy by Reggio and Philip Glass where images and music dance together and take you for a ride. Music can trigger emotions and reactions like no other medium as you can’t really take shelter from it. I always envied musicians for their power and since I never learned to play any instrument I had to find a way to join them into the gig. When I paint live on the music it is like playing along for me.

I don’t’ think I have a real occult set of symbols that I bring into play or “hide” into my work but certainly, all illustrators and visual artists have to confront the meaning and recognition of symbols if they want to communicate with an audience. I fall into periodical fascinations, mostly driven by a certain project or accidental discovery I made. For example, I worked on several projects related to World War I and II the past year and had to deal with a lot of graphics and symbols that characterized one or the other army and that people would recognize from decades of war filmography and literature. I searched into war posters and propaganda to find the essence of war imagery. When I worked on a show about Portugal and I was all about ancient navigation, constellations and pre-Colombian motives. When telling a story with images and sounds you have to take into great consideration what people would recognize the signs and images you make.

Ideas and inspiration can come from everywhere. Looking at other illustrators or painters might be a direct source of influence (if you understand what is that you really like in their work, which might not be as easy as it sounds…) but I sometimes find more effective to change the pool I fish from. Photographs or films often stimulate me more than illustration, which is an image somehow already digested by somebody else, with his own vision and style. I always find effective to go out and see some work in real person. There is no internet search that makes me want to paint like a visit to a museum. Sometimes also a walk down the block is enough to get the brain spinning. You see how the sunset light bounces on a concrete building and ZAC! you really want to paint something as warm, comfortable and yellow as that concrete wall.

I have a strong fascination for epic tales and never really grew too old for liking warriors. knights and ancient myths. Moving to Berlin has flooded my images with cityscapes and traffic lights but I guess there is still a flavor of chivalry in my figures. I admire the illustration and comic work of Sergio Toppi because of his fierce characters and the way he brings detailed weapons and objects into his unmistakable compositions. Another crucial influence is Danijel Zezelj who first showed me how to sculpt figures with light and shadows and how to paint along the music.

I am a solitary worker although I often meet with other people to prepare a collaborative performance or piece. Still, I sometimes suffer from this loneliness. Sharing the studio with other artists is helping a lot and I have realized how much better and happily, I can work while sitting close to another working mind. Chatting and beer breaks are fundamental to generate fresh ideas as much as concentration and silence are.

Summer is the golden season for live shows and performances and I have a few dates over the next months. On the side I am working on a comic book which will be published during the late 2017 in Italy and a couple of other illustrated book projects ready to start. I’m not as constant as I should be but I tend to announce my upcoming projects on my facebook page http://www.facebook.com/cosimomiorelli.czm and post the results on my website http://www.cosimomiorelli.com.