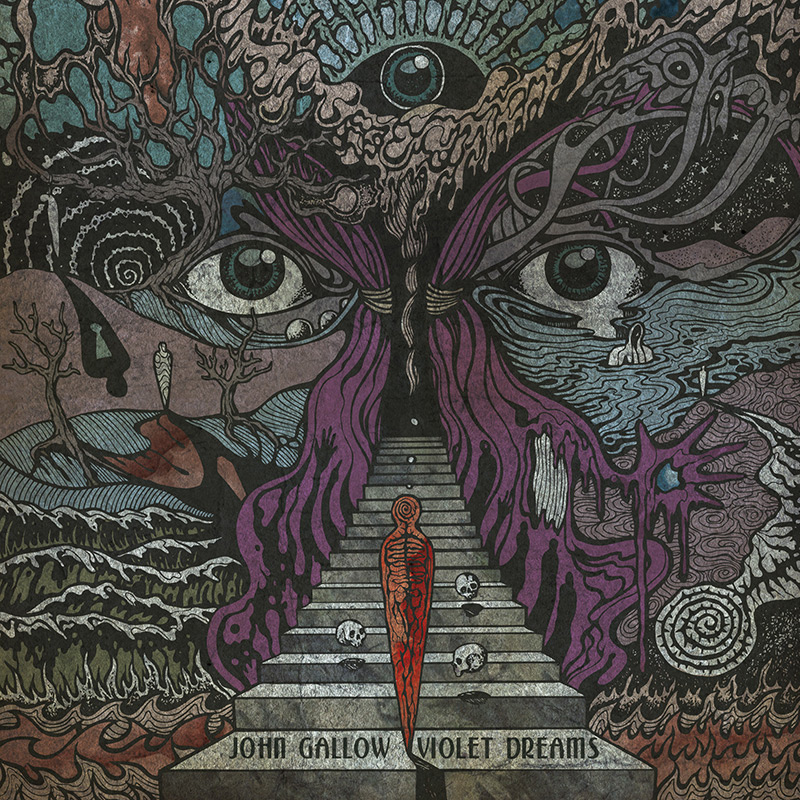 The artistic world of Romanian visionary, Costin Chioreanu, is inhabited by dreams, surreal imagery, magic, mysticism, philosophical introspection and much more. This is clearly manifested in his many illustrations, album covers, and animated videos – usually commissioned by some of today’s most distinguished metal bands. His distinctive style, rich in psychedelic shapes, vibrant colours and profound symbolism, is unequivocally poetic, proposing a unique balance between light and dark, the traditional and the modern, between reality and what may lie beyond. No doubt, this is a man who owns a complex, restless soul – always evolving. Heavy Music Artwork takes a peek into Chioreanu’s artistic universe.

HMA: It’s pretty much mandatory to ask how you became interested in visual arts: do you have any formal training?

Costin Chioreanu: I have been drawing since I was a very small kid. Later, I studied graphic design at the National University of Arts in Bucharest, and a few years later I finished my master’s degree in the same University. So yes, I can say I had some training.

HMA: On your online profile, you have posted many of the imaginary album covers you made as a child, for your own cassettes. What motivated you to do your own versions of the albums you listened to? Would you say this was the initial step toward an illustration career in the music industry?

CC: Well, in your question there is also the answer. The problem was that we did not have any original tapes here, with booklets and so on. In the case of extreme metal, we had just some crappy bootleg with horrible quality Xerox covers, and sometimes these poor covers were simple black ones with the name of the band, the name of the album track list written with Times New Roman. So, in this case, having just one magazine with not many reviews, no internet, I was facing quite often the situation when I was forced actually to draw something for that poor cassette without any cover… so this was my very first step into ‘my career’. Yes, of course it was. Basically, I am still working following the same ‘rules’ as in 1994 – listen to the music, read the lyrics (back then, to search for lyrics of extreme metal bands was something totally insane – people were selling them, using the postal service, Xeroxing pages with lyrics written using a typewriter…), get into the vibe, visualise it and… draw it.

HMA: When and how did you start doing band/album artwork professionally?

CC: Starting in 1997, I did all covers for my bands – garage bands or side projects: my first musical try-outs. In 1999 I made the first logo for another band upon request, and later, in 2003, I started to have the first official collaborations with some bands and labels. The first clients I had here were Avatar and Axa Valaha Productions, and from abroad Centinex and Hecate Enthroned.

HMA: Your visuals are really distinctive and easy to identify, thanks to some of your recurrent trademarks. These include strong, well-defined lines, psychedelic figures that border the surreal, and compositions rich in symbolism with aharmonious confluence of shapes and colors. Can you tell us more about the process of establishing this style?

CC: The process of defining my style was not a conscious process. It is just the result of many years of intense work, when I experimented with a lot of techniques from traditional ones (pencil, watercolour, ink) to newer ones as photo manipulation, collage, photography, etc. So in the end, I can say my style is a Frankenstein, formed by many interesting ways of expression, discovered by doing lots, and lots of experiments.

HMA: Your management of colors and textures is also very particular. There’s a certain Pop-art feel to how colors are applied, having an almost flat quality in some cases. When you combine this with the strong lines and textures, it creates an unusual sense of volume and perspective.

CC: Thank you for your kind words, but again, this was not something on purpose. I just developed this way of illustrating over time. I just kept what I felt is 100% me, so I ended up doing what I am doing now. But, this style – it is evolving as well; I never stopped making experiments.