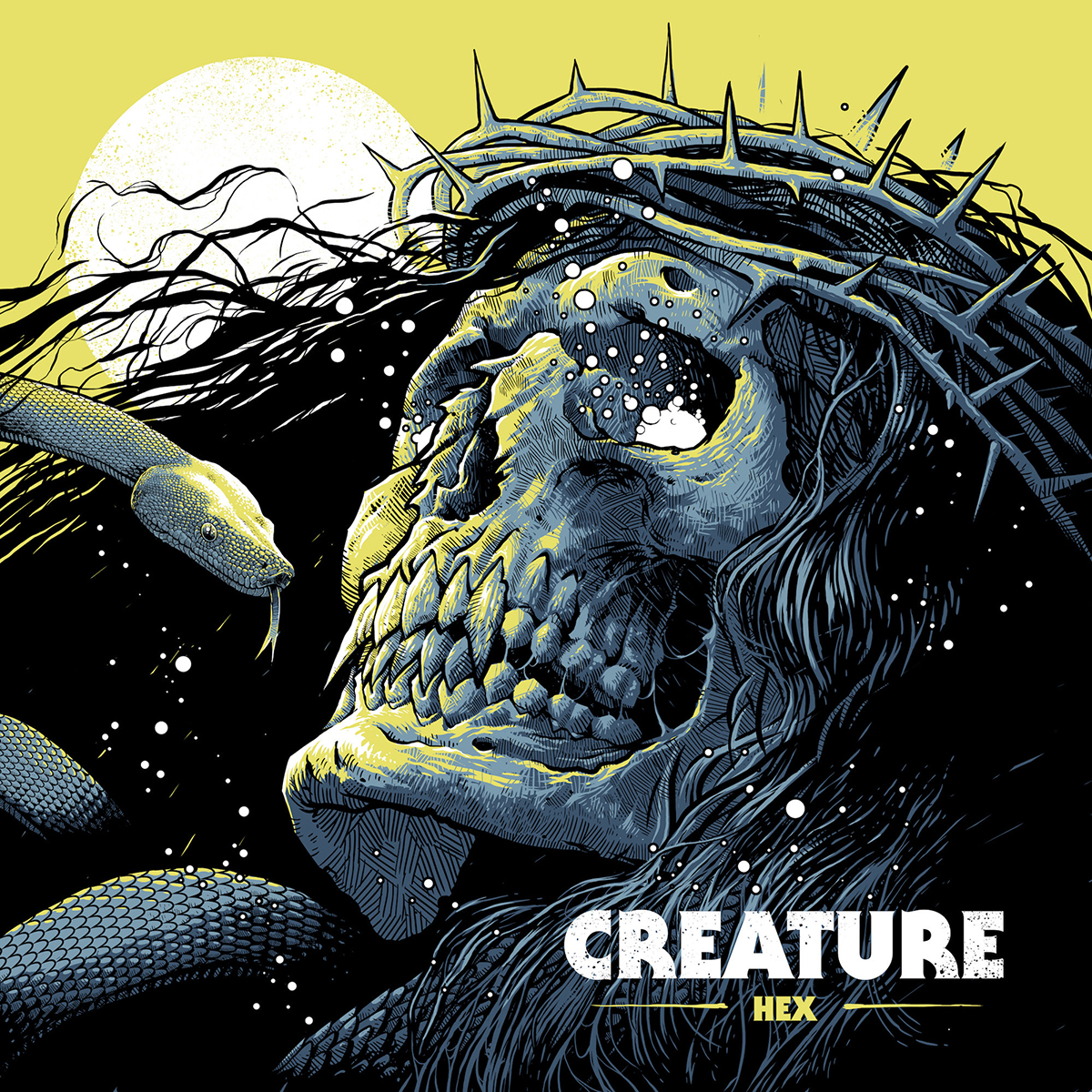 A three-headed audio beast; Creature is set to unleash. Hex is the debut release from the Birmingham, UK band, the first in a trilogy of EPs to be issued via Grey Ghost Records – working with revered UK producer Steve Sears (Gallows, Conjurer, Krokodil) and world-renowned illustrator Luke Preece (Metallica, Ghost, Ozzy Osbourne). In an age where heavy bands are seduced by the allure of processed guitars, triggered drums and quantised production, ‘Hex’ is an unrelenting burst of crushing energy that truly represents the sound of Creature. No click tracks, no samples, no inauthenticity. This is heavy music. This is Creature.

We’re a proud Birmingham band, have all been in a number of bands over the years in the city’s metal and hardcore scenes. James Thompson (guitar/vocals) and I had both quit other projects and wanted to put together something that captured the essence of heavy music, something abrasive and raw sounding. We worked on initial demo ideas and eventually, Dan Willett (bass) joined after trying a host of bassists. We were a four-piece for a while, but a trio set-up felt great to us.

We next spent a couple of years working on refining our material and laid down 12 tracks with Steve Sears (Gallows, Conjurer, Krokodil) that we’ll be releasing as a series of three EPs. The debut offering is ‘Hex’, that has just come out – with the others following in the next 18 months or so, with us now getting out on the road to play a load of shows.”

As the first of our three, ‘Hex’ is the most direct and straight-ahead EP – clocking in at less than 8 minutes in length there’s not much respite. We’re hugely influenced by bands that span the hardcore and metal genres without falling into the trap of generic beatdowns etc, so Converge, The Dillinger Escape Plan, Every Time I Die are obvious influences, but also British bands such as Reuben, SikTh and more recently Employed to Serve. With it being Creature’s initial outing, we went for all-out aggression – whereas, on EPs two and three the sound progresses, we push ourselves further in terms of technicality and sonics, while still retaining the energy and raw heaviness.

In terms of production, we wanted to steer clear of click tracks, triggered drums, processed guitars, sub drops etc – keeping it as real to the foundations of the band as possible. We understand why many bands have opted for studio-enhanced sounds, there is artistic merit in it, but we feel intangible elements like ‘energy’ and ‘grit’ that make heavy music so magical are lost. Steve was really bought into this and we love how authentic the Creature sound materialised.

James’ is the band’s chief lyricist, and on ‘Hex’ he addresses a mixture of ugly situations and behaviours all related to the human psyche. ‘Witch’s Grip’ is a metaphor for the feeling of isolation and anxiety after trauma, leading you to grieve for an existence you wish you still had. ‘Crestfallen’ is a reflection on the dark behaviours of a creative mind while soul searching during the creative process. ‘Liquid Gold’ is a vent on consumerism and the unhealthy values we as a society hold for material gain and ‘Blackness’ was inspired by a sickening racist attack we read about online in post-apartheid South Africa.

Speaking for myself, I’m obsessed with art’s intertwined relationship with current affairs and sociology – be it politics, war, religion etc. Art as a form has the opportunity to create for itself and criticise or tackle subjects in a vacuum. This enables expression without day-to-day consequences. Sometimes choosing to escape completely from reality is valid, but often tackling harsh truths is more cathartic and artistically rewarding. With Creature, there is certainly a mix of themes and ideas – but dealing with societal issues, stigmas and the homogenising of culture are things we are desperate to address and use the band as a vehicle to express.

In the main, of course – you look at the history of metal and it has always pushed boundaries both sonically and thematically. But I feel the overproduction referenced earlier has diluted the danger and excitement to the listener somewhat, particularly in the metalcore genre. You compare a thrash record from the 80s to some of the releases today, and while there might be a wider sonic spectrum that gives a recording more depth audio-wise, there is no comparison in terms of energy and authenticity.

That being said – a band like Converge has managed to capture this danger and aggression incredibly well, or the ongoing Black Metal scene is always pushing boundaries, but they are lightyears from the commercial presence of bands like Slayer. You can see how Trap has come along and almost become the new metal with this crazy energy, but these things work in cycles and guitar-driven heavy music will always have its space as a bastion of danger and expression.