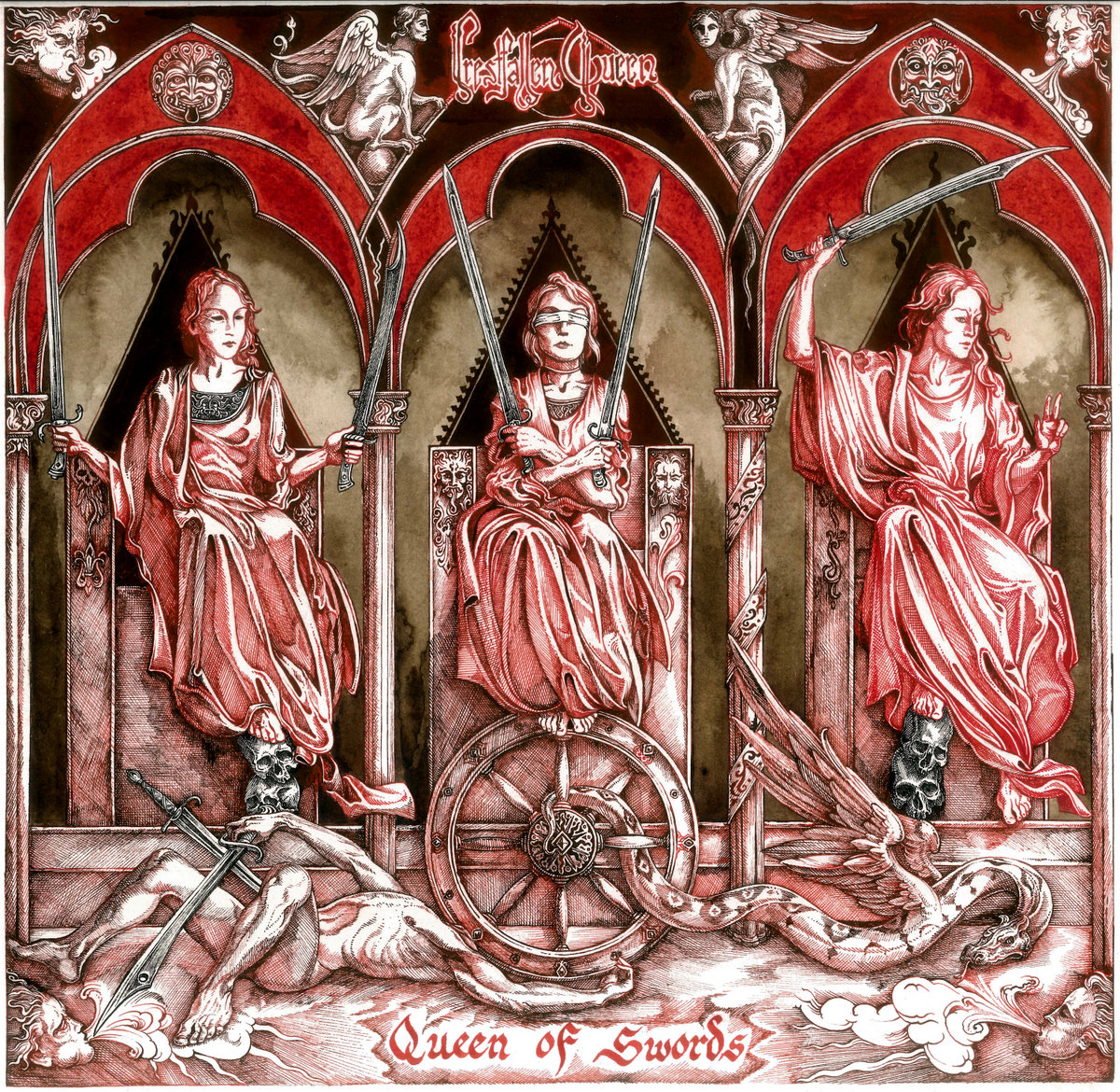 Queen of Swords by E and A

Crestfallen Queen hail from Stuttgart Germany but could have very well been born anywhere in the dark hazy fog of the seventies. The quintet was formed in 2016 playing their brand of Progressive Blackened Rock. The Doom laden riffs are backed by galloping metallic rhythms and hounded by eerie synths which are then topped off by a majestic voice that lurks somewhere between this world and the next. Our music can be summed up in a short sentence: a hellride between pain and ecstasy.

‘Queen of Swords’ is our debut album. There was no pressure or genre that we wanted to be put it. Sure, our demo tape went in a certain direction, but we didn’t think of that too much. So it basically came out as a mix of all the ideas we had, thrown together. Firstly we didn’t have a concept for it. It all came together step by step with every new song that we wrote. Receiving some artwork sketches during the writing process helped us a lot to actually see our music visually. Like a movie which you are about to write the music to. We are all more than happy with the result and we can’t wait to get back to songwriting and recording new material.

‘Crestfallen Queen’ is about heroines. If you are into art history, philosophy or literature you inevitably hit the old Greeks and Romans pretty soon: Ovid, Socrates, Plato, Aristotle and the whole old world stuff. And then you realize it’s always men speculating on the meaning of life, human belongings, the universe, heaven and hell and whatsoever even fifty per cent of humanity is female. Mostly everything was about great men doing great things like Odysseus and all the big boys. Women were just attachments, objects, evil – or the reason for a war, like Helen. Or they got raped by Zeus. So what the hell was going on there? Were females really that passive since the beginning of mankind? No, they weren’t. Men were just not interested in spreading stories about crazy cool badass women. But they existed. And we like to introduce them to people and tell “herstory” instead of history.

Each song on “Queen of Swords” is a homage to all the crestfallen queens in human history and their struggle with life and death and existence itself. We tell their stories to bring them back to general awareness. By doing so it becomes apparent that the struggles of these women were not unlike the issues modern people have: loss, anxieties, drugs, existential crisis, love, human abysses, empowerment and death. Let’s take the opener “Queen of Swords” for an example: There is a marble relief in the British Museum commemorating the release from service of two female gladiators, Amazon and Achillia. Until the relief was found no one thought of women fighting in ancient arenas. How crazy is that? Just the thought of fighting women was so “twisted” to society that they were erased from human history – except this single relief. So the song is about two female gladiatrices fighting in a Roman arena. Usually one gladiator kills the other. Or they beg for mercy. But the special thing here with Amazon and Achillia is that in this darkest moment of surrender (by putting the helmet on the ground) the other one also dropped her helmet to set an example: By doing so she’d shown solidarity with the weaker one – no matter if that meant death for both. It’s a song about solidarity in times of misogyny and cruelty.

Everything surrounding us is an inspiration and the stuff you just enumerated is making us the persons we are either in rejection of assimilation. Nothing we say, think, feel and create comes from a Cartesian vacuum a priori. At the moment we hit this world we are confronted with it. Despise it or not. We don’t have a special fixation on something you listed especially but I think our inspiration is based on the existentialist insight in the fact that we are thrown into this best of all worlds and sentenced to freedom. You have to choose your own heaven because the gods are dead. For some, this is a burden. For me personally it’s a chance.