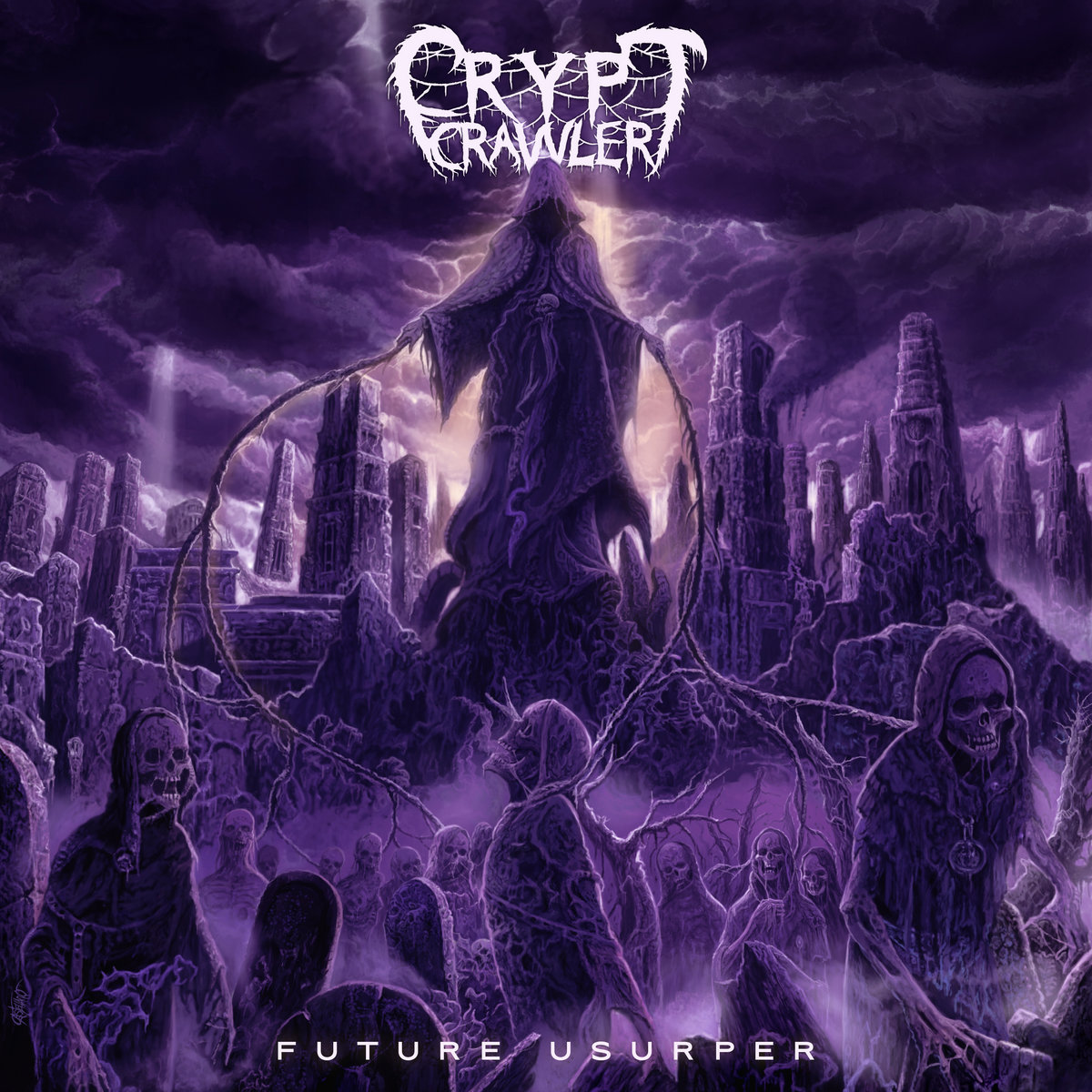 Crypt Crawler pulls old-school death metal vibes and traditional tones together with a modern approach. Created in 2018, Crypt Crawler already has two albums and an EP. They write well-crafted death metal with intelligent concepts and themes within their lyrics. It’s a brutal, dirty, grimy blend of elements reaching into the most primal corners of a death metal fan’s blackened soul.

We would describe our music as old-school death metal, specifically played how it was in the late 80s/early 90s, with elements of progressiveness and technicality. We are playing the type of music we want to hear produced in the modern-day death metal landscape.

We began writing ‘Future Usurper’ in 2019 before our EP ‘Blood Sustenance’ was released. As with our previous two releases, it started with Jordan and Marco sitting down together and recording riffs and demoing songs; however, mid-way through the writing process, Zach began also contributing riff and song ideas which led to a bit more collaboration on this release, along with Lewis contributing demo drums to the tracks straight after the guitars were demoed, instead of the scratch drums that Jordan and Marco would normally come up with. This continued into 2020, delaying plans and slowing the writing process due to COVID. However also allowed for some refinement and time to sit with the material longer.

The lyrics on this album were more reflective of the horrors of the real world than our previous releases, which focused more on fictional horror. Songs took on a more metaphorical approach to the content and entwined worldly issues and themes into horror narratives, with overarching topics including the loss of free will, abuse of power and humanity’s control. Many of our lyrics are inspired by horror films, novels and games, and even real-world events that are injected into horror narratives. Our music can also take many influences, ranging from whatever we might be currently listening to to the vibe of a demo song’s riff to build more riffs that keep the same musical theme going.

It all started when my uncle showed me AC/DC and Guns ‘n’ Roses when I was around nine, which led to my interest in playing the guitar and attempting lyric writing. However, it wasn’t until I was 15 when I went down a rabbit hole on YouTube looking up horror movie tribute videos which all seemed to have songs from bands like Disturbed, Rammstein etc., behind them. I let my curiosity get the better of me. I started getting into metal, starting with bands like Slipknot and Korn, before returning to Heavy Metal greats Maiden and Sabbath to thrash and heavier and heavier music. Since then, I have not looked back and have been in love with the genre.

I believe that music is very important to myself and definitely others too. Not only is it entertainment for some, but it also acts as a release from life’s stresses and helps empower people. Additionally, death metal commonly uses horror lyrics, which for me as a horror movie fan, really amplifies the joy I have for the genre, and writing death metal lyrics for Crypt Crawler is always a cathartic and enjoyable hobby.