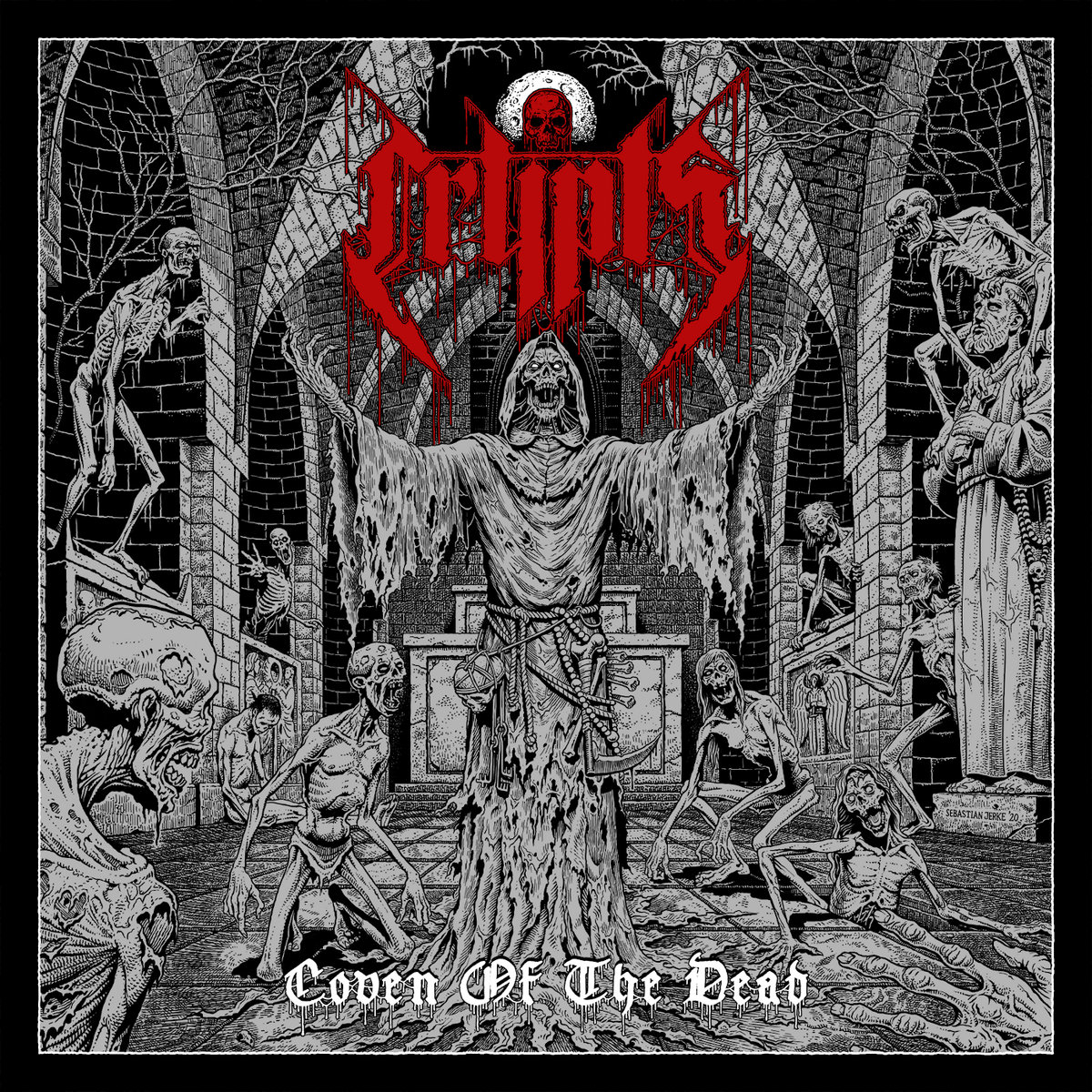 Coven of the Dead with Crypts

Crypts from Münster/ Westphalia were formed somewhere between 2017/ 2018 to create Death Metal in the old-school vein of gloomy, straightforward and filthy with an uncomfortable atmosphere. F.ortex (guitar), Ω (drums), S.gt Death (bass) and L. Gore (vocals) incorporated out of the ruins of some other bands and released the first sign of life with a demo in 2019.

The debut album followed in 2021 via This Charming Man Records and spreads the rough charm of death metal towards the end of the 80s/ beginning of the 90s.

We play old-school death metal the way we like it, and in the way we think death metal should sound dark and uncomfortable, packed with an atmosphere of horror. We love Oldschool Metal from the 80s and early 90s – maybe this becomes obvious while listening to our music. Music plays a significant role in our lives; for us, metal is an attitude towards life.

The album was released on March 19th, 2021, by This Charming Man Records on 12” vinyl in two colours (red and black) and on CD. It further is available as a digital download.

The whole process of bringing this album to the light of day took a while and was a tough job! We discussed several details quite intensive, and everybody put his heart and soul into ‘Coven of the Dea’.

Our drummer Ω and I have written the lyrics. They mainly deal with classic horror issues with a dash of horror-b-movie-aesthetics as we are really into old-school movies. Of course, inspiration comes from time to time from life itself. To sum it up: I think that vocals in Death Metal complete the orchestration, and the lyrics are meant to transport a certain atmosphere.

For me, everyone must think about their attitude towards life and their fixation and gather reliable information about Kantian Enlightenment if you want. On the other hand, I guess that earth would be much better if people wouldn’t force others on their opinions.

It all started with a TV show on German Television sometime in the 80s. There was a certain guy called Alice Cooper playing some cool tunes! I was really hooked! I had never seen something like that before! That had to be the start of it all. A few years later, meanwhile, in school, I got some cassettes of AC/DC, Metallica, Guns ‘n’ Roses, and Manowar. The rest is history. I wouldn’t claim that our music is important to the world! It is more a kind of horror entertainment for underground Death-Metal-Maniacs who value some dirty and rotten tunes. Thanks for your interest in our music!