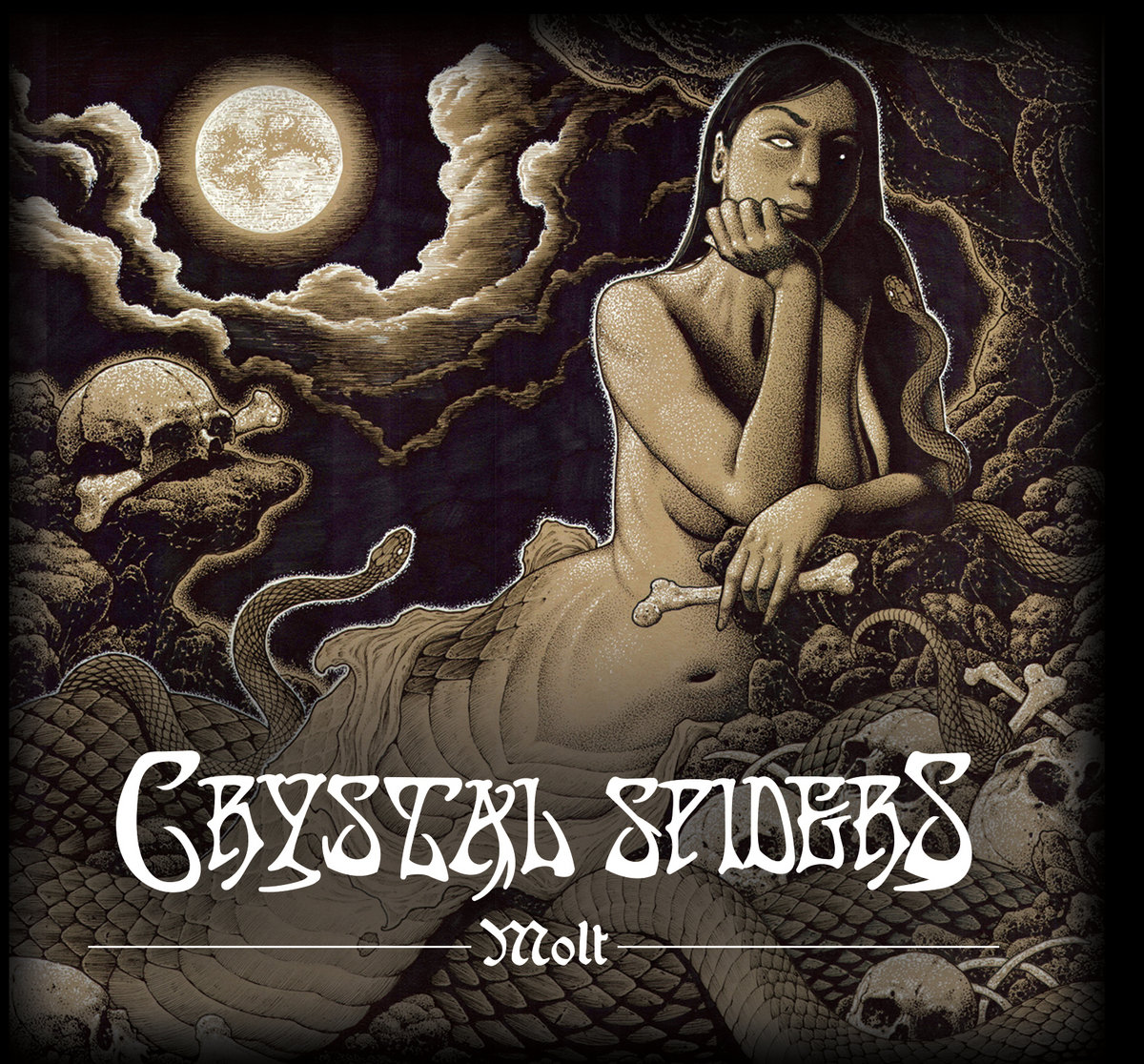 Dripping with fuzzed-out guitars, soaring vocals, and swaggering groove, North Carolina duo Crystal Spiders’ debut album Molt (2020) quickly won the hearts of stoner metal fans and critics. Helmed by bassist Brenna Leath (Lightning Born, The Hell No) and drummer Tradd Yancey (Doomsday Profit), Crystal Spiders fits within the lineage Sabbath-bred influences ranging from Fu Manchu to Kyuss, from Weedeater to Uncle Acid and the Deadbeats. But their broad scope — which pulls eagerly from classic rock dynamics and hardcore punk intensity, psychedelic texture and bluesy swing — draws the band closer to contemporaries like Year of the Cobra Well. They nod to well-trod templates to forge new territories of their own.

We released our first album, ‘Molt’, in September 2020. With this first record, we just wanted to get our names out there and show people who we are and what we’re about. Both Tradd and I have played in bands for 15 or more years now, so we try to put our best foot forward with everything we do. This is my first full length on bass, and my primary goal is to keep growing in my musicianship. I want every album I make to be better than the last one. We’re nearing completion of our second record, ‘Morieris’, and I think that I’ve grown as an artist between the two. One silver lining of the pandemic has been the extra time to craft my songwriting and fine-tune the songs in the studio.

It was hard to know what to expect from Molt’s release, mainly because all of the gigs and tours we had planned around it didn’t happen, and dropping a record during the pandemic was uncharted territory for us. Luckily, we have a fantastic team at Ripple HQ and Purple Sage PR to promote the record, and they were able to help us get a lot of reaches. Having a great label and phenomenal PR support was vital!

We’d ended up with an eclectic blend of tracks for ‘Molt’ once we had played them all live and refined what songs we thought would benefit most from a studio treatment. Since we’d recorded the demo ourselves, we decided to take a second shot at “Tigerlily” with a professional engineer, Mike Dean, at the helm.

For the new album we’ve been working on, now that live shows are on pause for the foreseeable future, we’ve altered our writing process accordingly and focused on what we would sound like as a bare-bones rhythm section. Now, the goal is that, once the world returns to some semblance of normal, we’d like to be ready at the drop of a hat to play shows again without having to rely on a live guitarist.

Where do you see our band in five years? It’s tough to see even further than 3-6 months in the future at this point. If the world can get a handle on itself and tour becomes an option again later this year, that’s what we’d like to do in 2022. I have a backlog of songs I’d love to polish and record if live music doesn’t come back as soon as we hope, though – as soon as this second album is done, we could quickly turn around and crank out a third.

I don’t think it’s unreasonable for Crystal Spiders to have three or four albums out over the next five years, although we both have other projects that will be releasing in the meantime. Lightning Born will have an album out not too far behind Crystal Spiders, and I know Doomsday Profit is gearing up to record as well; both Tradd and I have been working on separate solo material, too.