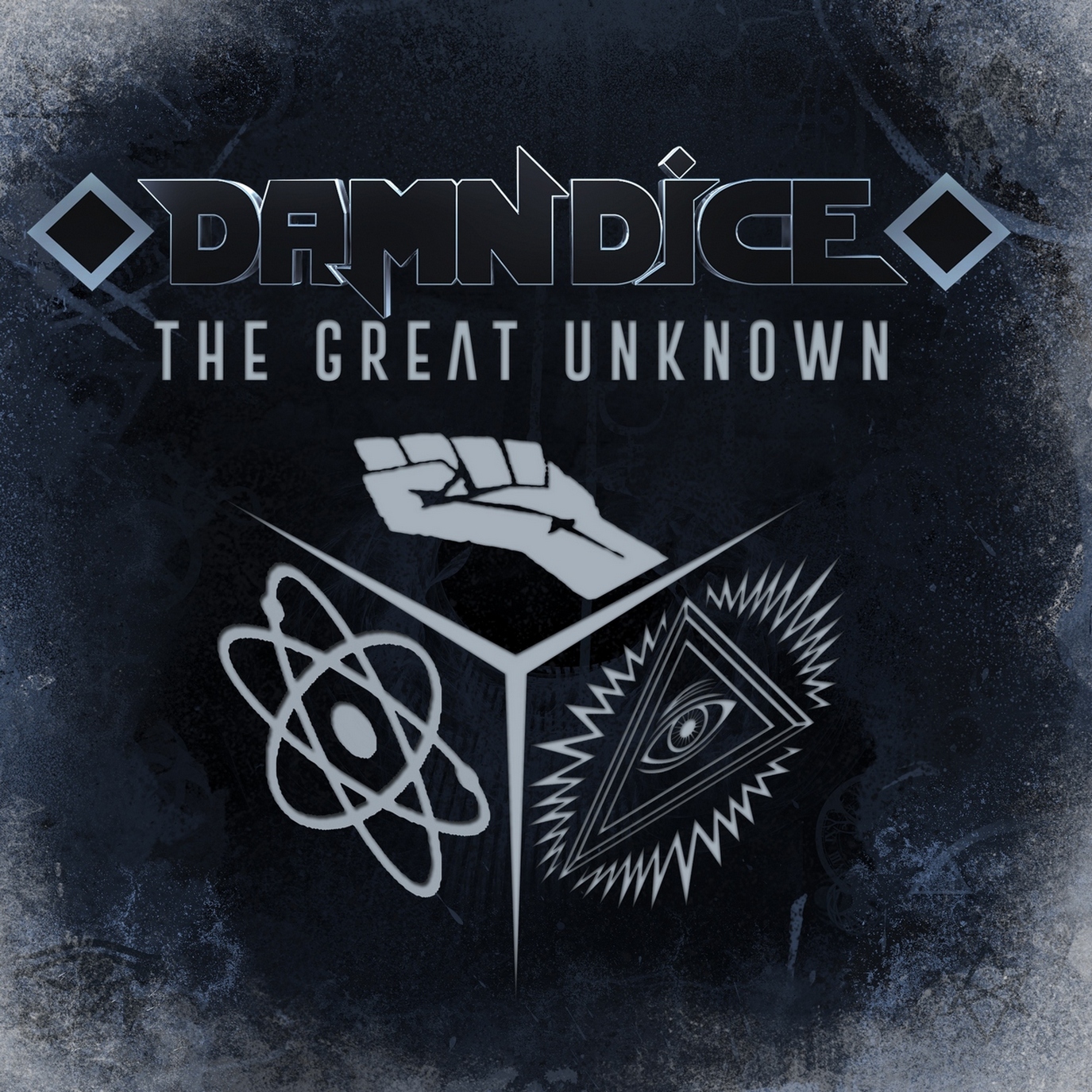 Damn Dice are one of London’s many slick rock’n’roll offspring. One of the best things about them, I’d say, is that they’re a motley group of young French, Italian and English musicians which warms my heart, dear reader, because I’m a big fan of seeing diversity coming together to make art. Because art is transcendent like that… Also, geez, Fransoa and Wallis are tall drinks of water. I thought I was an imposing height!

I’m getting ahead of myself. Damn Dice are: Alex (vocals), Wallis (guitar), Marco (bass) and Fransoa (drums). The band recently released its EP ‘Wild ‘N’ Ready’ as a precursor to their debut album. Known among fans of rock/glam ‘n’ sleaze for their energetic and loud style, these boys nevertheless don’t see themselves as part of the new wave of glam that hit us towards the first half of the last decade. Heavy Music Artwork sat down with the guys after their recent show at the Camden Barfly, celebrating the launch of their EP to talk about who Damn Dice are and what they want from life.

Andy (HMA): Let’s say you meet someone who has never heard of you. They ask what your music is about. Go!

Andy (HMA): What’s the story behind the name?

Damn Dice: That’s actually a good question. It goes back to the very beginning when Fransoa and Wallis started putting the band together before Marco and Alex came on. We were just like, ‘let’s figure out the band name first and then we’ll see’. We were just looking for something that we felt represented the band and how we do things. We were always like ‘whatever you do, do your best, just throw the damn dice and we’ll see’. Marco and Alex really liked the name as well because that’s the same kind of spirit that they were following.

Damn Dice: It was awesome apart from spending the whole summer stuck in London recording it. [Laughter] The hardest part was to only pick six tracks; we didn’t want to go for a full-length album because the idea was to give the fans something as soon as possible. It was really fun because we spent all of our time together and being in the studio was like being at home.

Andy (HMA): Of this EP which song are you most proud of?

Damn Dice: [Laughter] We really had a hard time picking just six tracks. We went for such a full blast of songs but there isn’t just one we can say is our favorite. It was really hard because the other songs that are not on this EP are really awesome. We really can’t wait to record more stuff. Alex really likes ‘Heart on the Run’, that’s a fun one to play live. Fransoa loves ‘Bang Your Head’ because it is really surprising and in a way – very punishing, very right in your face, really fast and really loud. We have new songs that are not on the EP that are really exciting too!

Andy (HMA): Let’s talk about lyrical content. How do you write them and what goes into coming up with them?

Damn Dice: When we come up with a song we just try to think about ‘what is the song saying’? We do a lot of listening; you can get a real feeling for what the right lyrics for a song should be by listening to the melody. We record some vocal melodies and then put lyrics to them. We always try to keep everything positive. Whatever the topic of our song we always try to say ‘push through and stand your ground’. The whole band believes in being positive. Songs like ‘Wild Into the Night’, yeah it’s about drinking and partying but there’s also a message of hope: you’re gonna fight for what you want and you’re gonna get it and it’s going to be good. Whatever you want you’ll get it if you fight for it. We really like that message and I think it’s a major theme in our lyrics.

Andy (HMA): And how do you compose?

Damn Dice: We go straight for the catchy melody. Fransoa and Wallis write the instrumentals taking ideas from Marco and Alex but most of the time we just picture the band live. Working backwards we think about writing songs that will make the crowd happy. So from there we think – how do we do that? We want people to sing with us at concerts so we spend hours listening to riffs thinking about ways to make the song even catchier. Sometimes we sleep on songs when we feel they could be better. We play live the way we sound on the EP and even then we’d say the best way to experience what we do is to see us live, no matter how awesome the EP is.

Andy (HMA): You have one music video out. Any plans to make more?

Damn Dice: Yeah! Possibly in the next two months. We have videos for ‘Bang Your Head’ and ‘Take the Fight’. Trust us they’re without effects at this moment and they’re still fucking awesome. For ‘Wild Into the Night’ we wanted a proper party video but this time for ‘Bang Your Head’ it’s going to be a really cool professional studio performance and for ‘Take the Fight’ there’s an actual storyboard. Alex got to be an actor for a day! [Laughter] And the cool thing about that one is that the song isn’t about going out and punching people, it’s about fighting yourself to become better. The storyboard is just amazing and there’s a great surprise at the end. When we shot it we were following Alex and every time the camera guy would say ‘Cut!’ we would be like ‘Wow, man! That was awesome!

Andy (HMA): How do you guys promote yourselves both real-world and online?

Damn Dice: You gotta use every tool that’s available to you. The music industry being what it is today, it’s all about things like Facebook, MySpace and Twitter. You have to have a presence online. You can’t avoid it. It’s out there, it’s free. Some people have told us we promote ourselves too much but what is too much? People can tolerate pop stars ramming themselves down your throat, promoting their music, so why can’t we? It’s been really good for us. Everyone is on Facebook. Like it or not it’s a good tool to promote your work. The best thing is: you can get in touch with your fans easily and vice versa. Our fans are special to us and without things like Facebook we couldn’t talk to as many as we do.

Andy (HMA): Do you think that perhaps a lot of people playing this kind of rock today are chasing the fame and the status of a rock star, without bringing anything really new to the scene musically?

Damn Dice: I think in this kind of music you need to have image. We don’t spend hours and hours on our looks: putting on eyeliner and hairspray and whatnot. We were like this before we were a band but a lot of bands get it wrong and they think that looking good is everything. There’s bands out there that are still trying to convince themselves it’s 1986. When it comes to us, honestly it’s a fad that we don’t really get…. Yes, we have long hair, black jeans, leather jackets, eyeliner and so on but that’s the way it’s always been. We don’t do it because we’re stuck to this label of ‘glam’. At the end of the day it’s all about music. We just want something powerful that people will enjoy. There’s no point in trying to be an 80’s band because it was already done back then and it was done well. A lot of people get it wrong – it’s not about standing behind a microphone looking good, it’s about running, jumping and rocking out. It’s not a fashion show or a beauty contest.

Andy (HMA): A lot of musicians are waiting for glam/sleaze to break back into the mainstream. What do you think about that?

Damn Dice: I think they’re in for a long wait. It was mainstream for a period of time, a long time ago. We’ve all heard of the Swedish scene and how the bands there are doing better than anyone else but really we can’t be compared to them. We do our own thing and we feel we are not really part of the glam/sleaze genre so much.

Andy (HMA): Do you think mainstream is the death of genre?

Damn Dice: Absolutely. If a music genre breaks into the mainstream then more and more people will try it and not necessarily the ones who have the right mindset for it. Mainstream isn’t a bad thing necessarily because it’s all about the music and exposing more people to it. If that’s the direction a genre takes then so be it.

Andy (HMA): Where do you see Damn Dice in five years?

Damn Dice: We hope we’ll be playing every day and that we’ll have a few albums out. The important thing is to make a step forward however big or small it is. With a band like ours really the only limit is people around us stopping us or helping us. In five years we could be dead or we could be filling up Wembley Stadium.

Damn Dice: Being on stage and having people enjoying the fact that we’re on stage. Developing as musicians and bonding as friends. Writing more songs! The really cool thing is when you have people at a concert waiting for you to play a song they like. They’re waiting for you to play it and when you do, they start singing along. That’s an amazing moment.

Andy (HMA): Lastly, what do you want to tell your fans and supporters?

Damn Dice: Go out, see bands live, see a lot of bands live and have fun! Support local bands. There are a lot of small bands who don’t have the same opportunities, that doesn’t mean they are shit. Support them because they are the future of rock music.

Andy (HMA): Cool. Thanks for talking to HMA, guys, and good luck!

Damn Dice: Thanks so much, Andy! It was really fun!