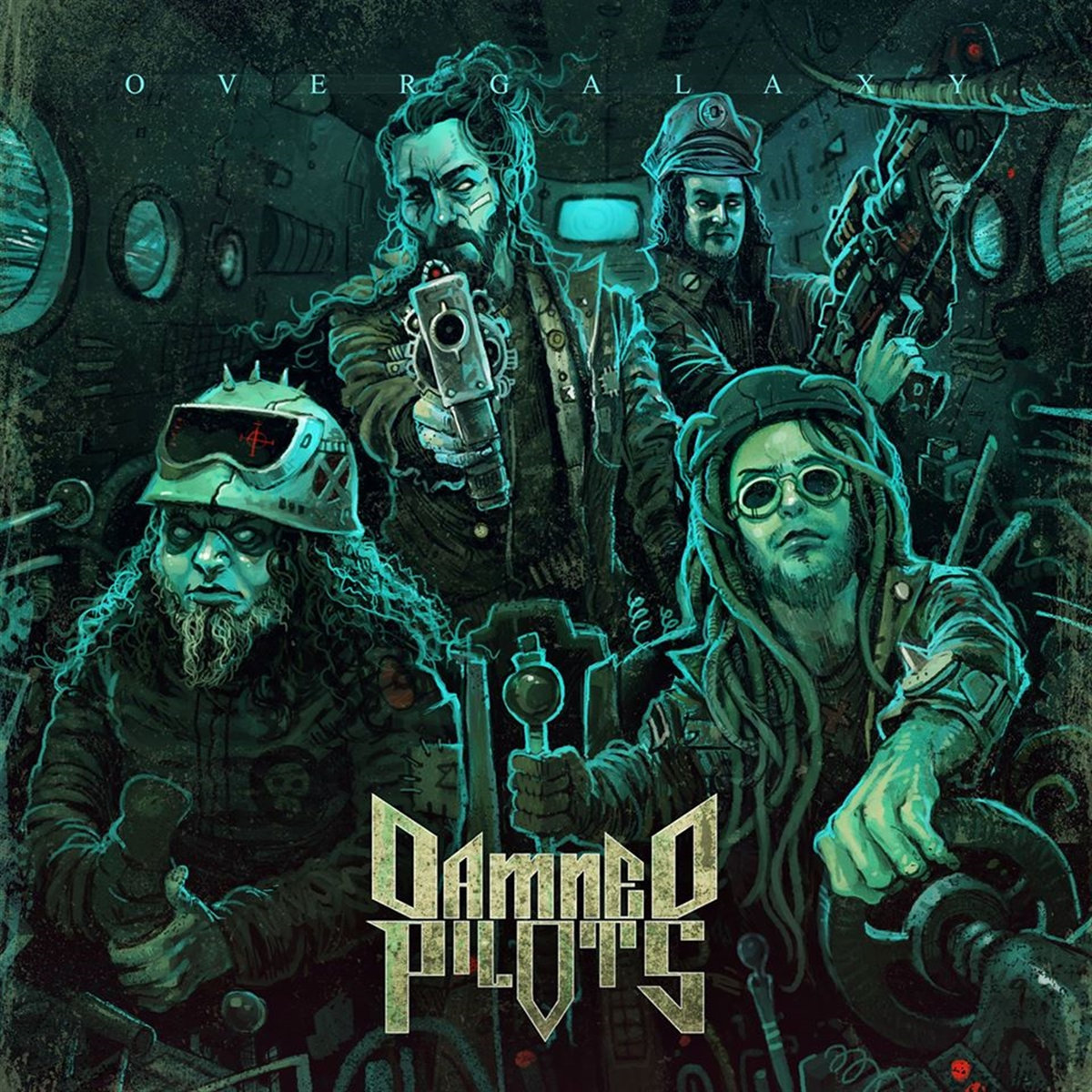 In a galaxy far far away

‘Overgalaxy’ features nine songs written by Don Nutz and Sgt Ote and one by Ron Goudie (‘Hell Is Cold’). The style goes from mid-tempo groovy metal to doom metal and psychedelics ballads combined by catchy melodies. ‘Damned Pilots’ and ‘Season of the endings’ are two groovy metal pounding numbers dominated by solid huge riffs made to bang your head to.

DP: Our new record ‘Overgalaxy’ came out on December 15 via Sliptrick Records, it was produced by Ron Goudie (Death Angel, Gwar, TSOL, Poison), mixed and mastered by legendary Bill Metoyer (Trouble, Slayer, Corrosion Of Conformity, W.A.S.P.).  It’s a concept album about the Damned Pilots, four outcasts, rebel space pilots who live in the year 3000. The Damned Pilots are constantly fighting against their arch enemy Gorguss and his evil fleets, the master and oppressor of many solar systems and galaxies. In order to make a living, the Pilots work as marauders and looters. They are wreckers paid by rebel commanders and they travel through space on a hippie van from the 70s. The space van, which is also an ancient relic, was found by Damned Pilots in the deserts of planet Europa, which once was known as Earth. The van was then pimped and customized for space combat with some nuclear and hyperspace weaponry. Lyrics are about the exploration of new planets, encounters with monstrous characters such as ‘Sylvanic’, a bigfoot from outer space, and also about fights and was lost to our enemies, vengeance and apocalypse. This record features ten songs.

HMA: What was the songwriting and recording process like?

DP: When we entered the studio we were very well prepared, we had already recorded a demo for our record in the Netherlands at the Voodoosound Studio in Ijmuiden, using a 24 analog track. We only kept two songs out of that session, namely the two ballads, then we re-recorded further at home so that we could figure out what to do and a way to not throw away money and time in the studio. We rehearsed those songs and we played them live a lot prior to entering the studio again. The final record was recorded at Track Terminal Studio in Trieste, Italy.

HMA: What can you tell me about your cover art?

DP: Absolutely, we tried to show the imaginary world where the Pilots Damned live, the cover shows them in their space van. We wanted to be the protagonists of the front cover, a bit like the covers by KISS, we like to focus on our image as well as on our music. We immediately liked the way Uzi was using colours in his drawings, strong colours, typical of certain covers and T-shirts of those deathcore bands that were popular a few years ago. Uzi also worked with Suicide Silence, a band that is very far from our musical groove, but very attentive to the graphics side. For the cover of ‘Overgalaxy’ we wanted to have a predominance of emerald green, we really wanted to match a specific colour to the name of the band, an original combination. So, once again we looked back at Kiss and their solo albums, when each member chose a single colour for their covers: Gene Simmons got red, Paul Stanley got purple, Peter Criss chose green and Ace Frehley blue… the DAMNED PILOTS chose emerald green. For the inside cover, we wanted to show our space van flying in space, and Uzi was really good at drawing it in detail.

HMA: Lastly, to you what does it mean to be creative?

DP: Create art, in our case, write songs, make videos, photos, write lyrics, being creative is a necessity of life, a medicine against laziness of mind, a way to communicate, an escape, a drug: we can not imagine a world without creativity.