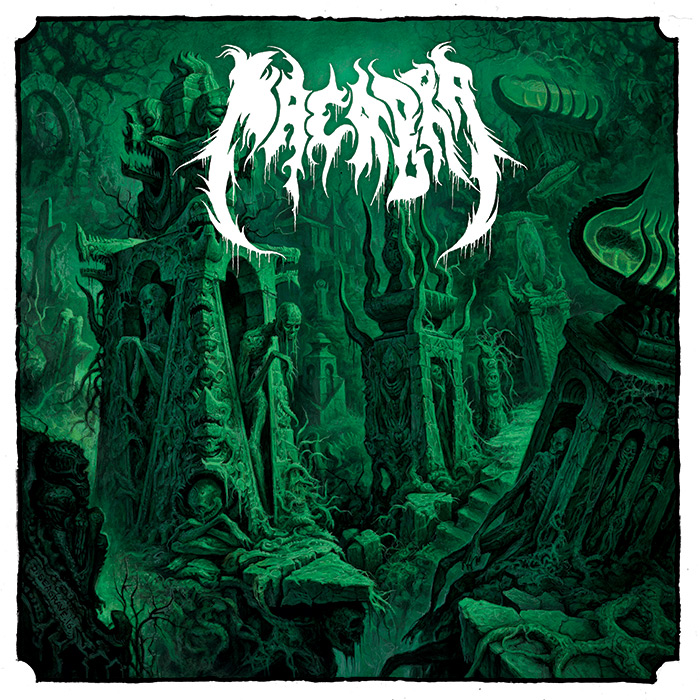 MACABRA are proud to reveal the artwork for their second full-length recording ‘…to the Bone’ via Vonfrost Records and Morbid Visions Music this spring/summer. The elaborate cover artwork is delivered by Dan Seagrave who is well known in the death metal community for painting covers of classic albums by bands like Morbid Angel, Entombed, Malevolent Creation, Suffocation, Séance, Edge of Sanity and many others. MACABRA, which is a collaborative between Belgian, Adrien “Liquifier” Weber best known for his work in Vociferian, Goatholocaust, Luger, etc., and renown American underground death metal illustrator Mark Riddick also known for his work in Fetid Zombie, Grave Wax, etc. MACABRA sets out to play death metal inspired by the late 80s-early 90s era and regularly reference their own personal collection of demo tapes for inspiration.

MACABRA have established themselves as a rare force in the resurgence of new “old school” death metal by offering something familiar while covering new ground simultaneously. Riddick, called on Dan Seagrave to create the album’s cover because it seemed the next appropriate step in MACABRA’s evolution as a band. With minimal instruction, mainly to stay true to the band’s green color scheme, which is seen on most all of their productions, Seagrave conjures an intricate scene featuring ghostly mummified bodies, corpses awakening from their tombs, and decrepit structures entwined by knotted roots. The overall sensation compliments the music flawlessly in its bleak, oppressive, and atmospheric approach.