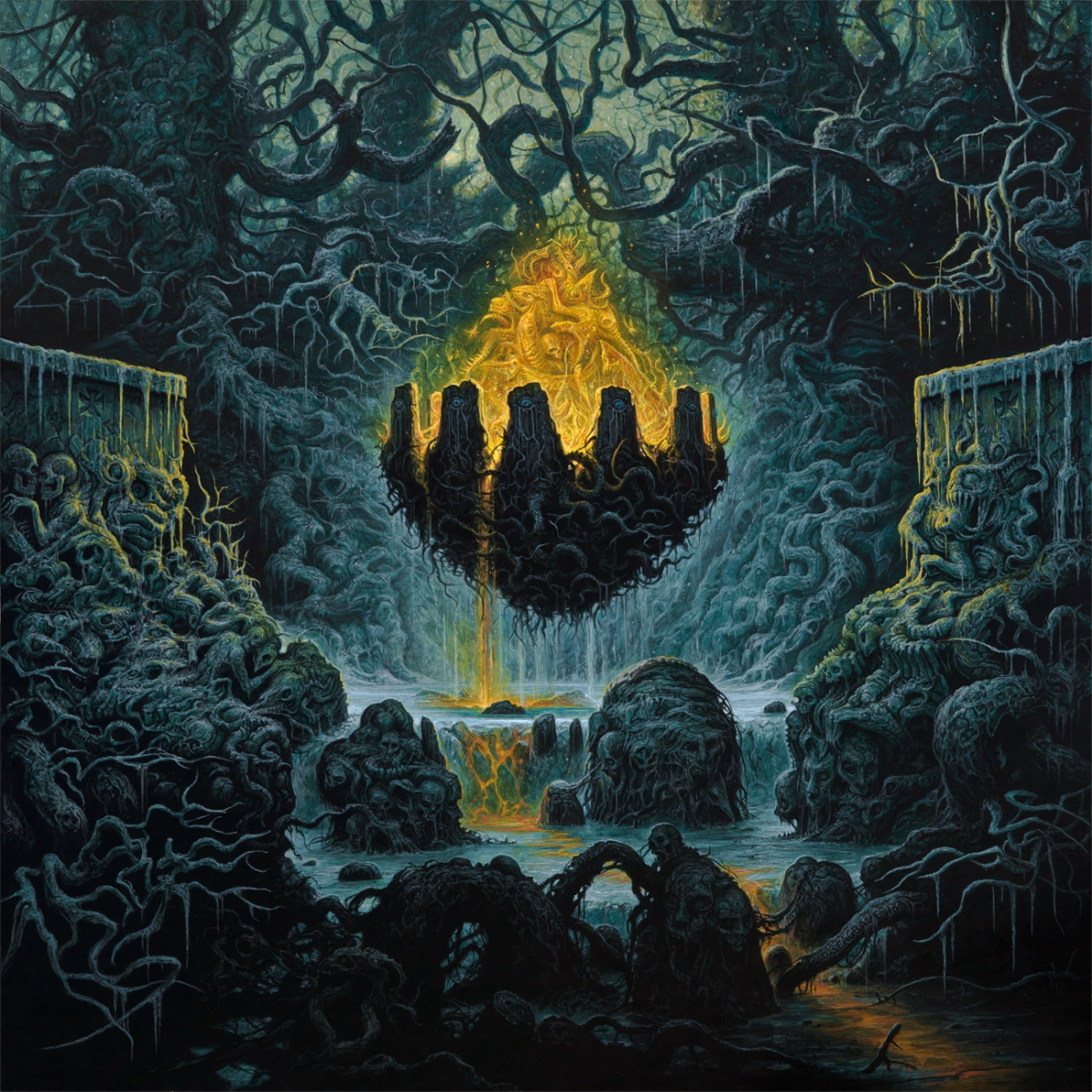 In conversation with legendary Dan Seagrave

Dan Seagrave is not your typical, everyday cover artwork designer. Far from being a common illustrator, he’s a true builder of hyper-detailed scenarios and otherworldly atmospheres. Not in vain, Metal artists like Pestilence, Demon Hunter, Gorguts, The Devil Wears Prada, among others have used his talents in more than one occasion. In case that wasn’t impressive enough, then, check his hypnotic short films. They’re rich in symbolism and allegoric power; the kind of visual experiences you won’t soon forget. Heavy Music Artwork had the honor of interviewing the British maestro about his artistic origins, his vast body of work, including his intriguing short films.

HMA: Do you remember how your interest for visual arts began?

Dan Seagrave: There was no definitive moment or beginning. It was just something I did from early on. Draw pictures. No doubt the same for anyone who thinks visually.

HMA: Do you have any previous formal education in Visual Arts?

Dan Seagrave:I took a year at West Notts Art College from 1986 to 87. Which was a pre-diploma, and was just three days of art related classes per week. It was enjoyable but at the end I received a grade E in art. So for me it was a strange feeling coming out of there. I’d never done well at school, probably because I had allot of personal problems, and art was the only thing I had, really. So the education system offered no hope, or sense of encouragement, nothing at all in terms of positivism to me.

HMA: If you have any, what artists or Art Movements can you mention as influences?

Dan Seagrave: In my early days, [I liked] Mc Escher and Van Gogh. I found allot of production design and art direction in film to inspire me. Also architecture such as Gaudi, and more modern designers like Frank Gehry. I still like these things, they are very ingrained in my mind. I like the aesthetics of the 1930s in terms of architecture and machines. The Art Deco era is great and the styling is quite unique.

HMA: Is funny that you say that because most of your work proposes challenging architectural structures usually mixed with organic elements.

Dan Seagrave: I’m probably influenced by generational eras in architecture of different cultures, and also by evolution in nature, species and geology. But I’m not stuck on one thing. You can get the gist of that in a painting like “Drive By”, where there is a multitude of eras in architecture, sort of re-imagined as a whole. It’s a bit ’30s, but also it could be Victorian, or take from many cultures.

HMA: Do you approach any different your more personal pieces than the work you do for commissions such as cover artworks?

Dan Seagrave: Yes. My commissions are just that. In the early days, it was less of a separation. The covers were mostly left to my own devices, so it was closer to being my art. But as you develop away from that as I did when the scene took a turn in the mid ’90s and I stopped doing album art. Then you are on your own again with your ideas, no burden of purpose.

HMA: Was it difficult to get away from album covers and then, coming back to them?

Dan Seagrave: It took a while to get away from the cover art and discover what my ideas were about in terms of my art. That’s why I hesitated in returning to doing illustration, or album art. But I did, and I think the creative division works fine.

HMA: These days you’re also dedicated to film making. You have directed intriguing short films “Shadowline” and “Ingrained.” Is film a natural progression for you as an artist?

Dan Seagrave: The moving image always fascinated me. I don’t know if the conventions of filmmaking interest me too much, the idea of appealing to producers and executives and investors. In Toronto (his current location) you always see films being made,  so you often see the mechanics of it, and that’s all fine. I’m really interested in ideas, and putting that into a visual form. I also like the creative process of building a narrative.

HMA: How much, in your personal experience, movie making differs from painting?

Dan Seagrave: The difference between the two things for me is a technical thing really. That’s all. I can develop an idea, storyboard it but then I have to get a few people together to help it happen in camera. I enjoy the editing and developing the visual fine tuning in post production, and also creating the sound. It’s another artistic outlet.

HMA: Do you think that your work for Metal bands opened new doors to professional opportunities and helped you get your name and works out there to a broad audience?

Dan Seagrave: One thing leads to another, and the cover art has become a solid collection of a certain kind, and to date the thing I’m known for. I think what I particularly do is not easily transferable to other things, unless you really make an established dint, and everyone see’s that, and accepts it, and likes it. So I’m talking popularity. But I don’t think the appeal in my art is about popularity. It’s more about obscurity, and underground. Though I have no problem with my art getting noticed. I don’t see that as a downside. Even though I’ve been making art for a while. It’s a long way up the hill. But it’s a job I created for myself, so I’m proud to have made some kind of career with my ideas.