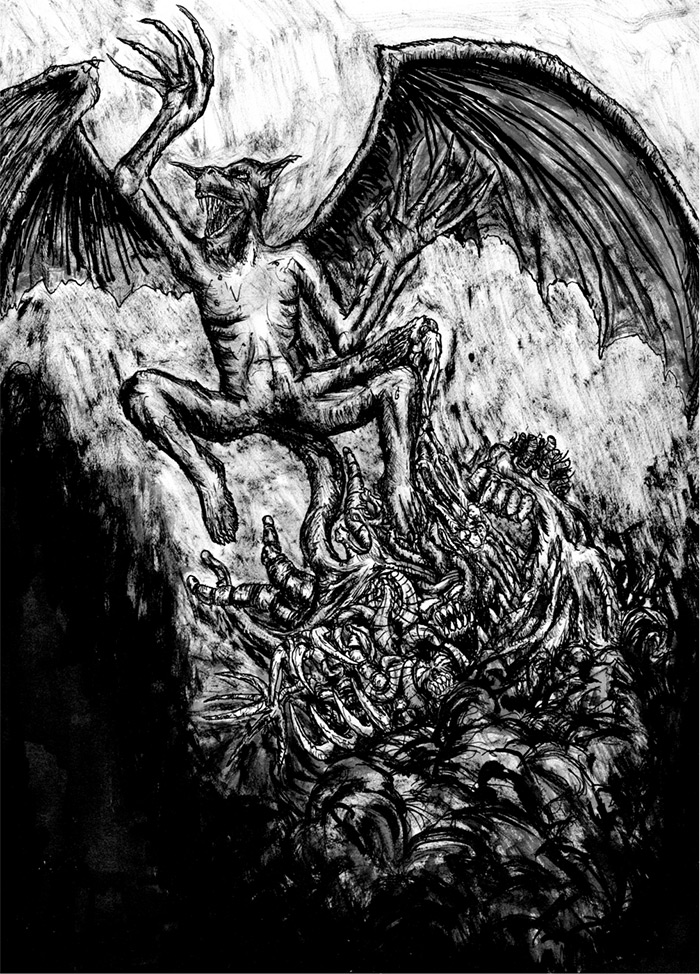 I was born in the middle of nowhere, Alberta, in 1991. My passion for illustration first developed at the early age of 10. At that age, I was into fantasy imagery, and then went into rather morbid and demonic imagery later on. I was into art first, then music a little while later – Heavy metal, to be more specific. After that, my love for artwork and heavy metal intertwined – Playing in bands and making metal artwork.

I was self-taught all throughout my school life – No post-secondary artistic training, no degrees or credentials, though that is a potential long-term goal of mine. All I currently have under my belt is my skill. I spent my whole life in rural Alberta – An oilfield dependent economy. I figured I’d settle for a well paying job I didn’t really want, but gives me quite a bit of money to get by, and that I could do art and music on the side. Now that our economy is in the shitter, I think it’s time for me to step away from oilfield based work, and do something I really enjoy doing for a living.

My technique is heavily traditional, and always evolving. I have used a variety of different traditional mediums (as well as the occasional mixed mediums), but my main weapon of choice is pen and ink. I use many different kinds of pens as small as a 0.05 and as big as a magnum sized sharpie. When a piece is finished being drawn, I then scan it and do some minor editing. The only editing I do is level adjustment to make the dark areas darker, taking out Sharpie marks making the black background a solid black. I’m a total noob to photoshop and all those kinds of programs. I don’t know a whole lot about them, and even if I did, I’d still prefer doing good old fashioned pen to paper (or brush to paper. You know what I mean). I try to be able to do anything, but satanic/undead themes are definitely my forte.

My arsenal consists of many different kinds of pens. I mostly use Pigma Micron sketch pens or Staedtler pigment liner. Usually black and white work, running the gamut of different pens and pen techniques. For my color work, I use colored brush pens, courtesy of Faber Castell (or Prismacolor depending on my mood). For my minor finishing edits, I use GIMP. All my artwork is done in the comfort of my own home. Specifically, my bedroom. I don’t have a fancy studio, nor do I have the means or the resources to get one, currently… As much as I would like to.

To me, music and art go together like mom and apple pie. There’s a lot of music out there that, when I listen to it, it generates a whole lot of imagery in my mind. For example, listening to raw, gritty black metal generates some kind of gritty, evil, colorless imagery in my head. I find that it is essential to have artwork that matches the music. Take a look at bands like Voivod, for example. Michel Langevin’s bizarre artwork is very fitting for the chaotic music. So, when I get a commission from a band and I hear their music, I get a clearer idea of what the artwork is supposed to look like.

I want to branch out and try out other things, but Hell, I sure love using dark and, often times, Satanic imagery in my work. I love Tolkien-esque fantasy as well as entertainingly gory zombie movies by Romero or Lucio Fulci. I find that old school pen and ink is a really effective medium for occult and undead imagery. The gritty, yet detailed aspect of it works very damn well for that kind of stuff. Pen and ink is what I primarily do, and I mostly do Satanic and undead imagery, but I want to practice long and hard to be able to do all sorts of things. I will often look up different kinds of techniques to try out. I always aim to improve myself every day.

And now, for the influences. There is no denying that artists such as Mark Riddick and Chris Moyen have had a helping hand in influencing my pen and ink technique. As well as some other artists such as Gustave Dore, Alfred Rethel and plenty others. I’m not just influenced by pen and ink artists, though. I imagine you guys get lots of people naming these guys as influences, but I’ve always loved the work of Dan Seagrave, Wes Benscoter, Ed Repka among others. In a broader sense, I am also influenced by basically the entire world around me. Entertainment, the media, the hideous aspects of real life, such as war and death, but also the beautiful aspects of it.

As far as long term ambitions, I have no long term plans set in stone, yet. I have settled with career paths I didn’t want only to get booted and wind up with menial jobs. It’s definitely time for me to take one of my few skills I am good at and enjoy doing and make a good, serious living out of it. I’m not yet sure what exactly that would entail, but it might possibly be an artistic endeavor.