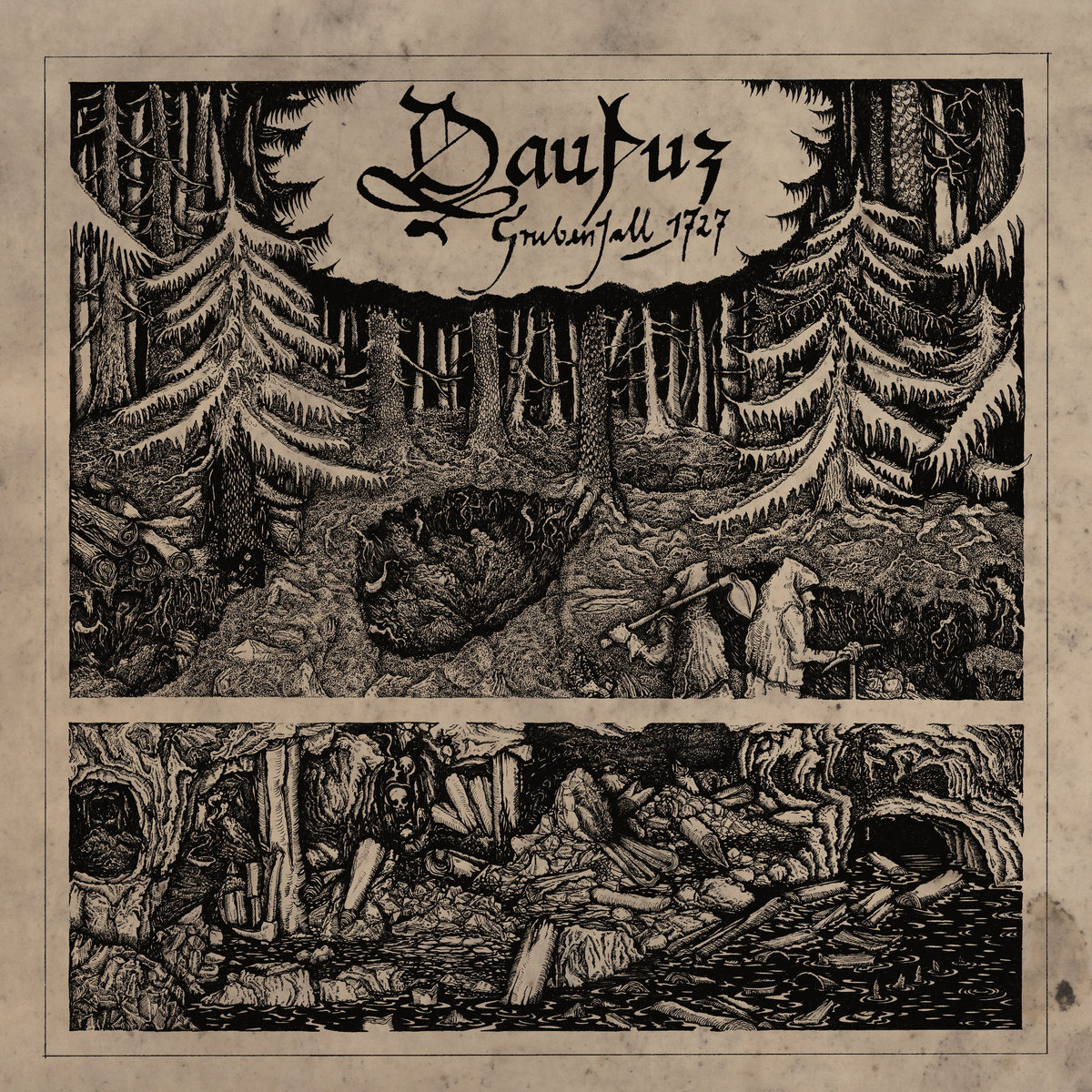 The idea for “Dauþuz” came up in 2016 after Aragonyth had accumulated some material that didn’t fit with his main band at the time. It was darker and more direct. He came up with the name “Dauþuz” for it, Germanic for “Death”. A short time later, singer and lyricist Syderyth, whom Aragonyth already knew through other projects, joined the band. After some consideration of the thematic orientation, Syderyth finally suggested taking up the theme of mining and enriching the lyrics with the miner’s language. This is something new in the black metal genre; it has not been done so consistently before. To date, three albums and two long EPs have been released. A new album is planned for the second half of 2021.

Aragonyth: In creating the ‘Grubenfall 1727’ EP, we had the 20-minute track ‘Die Letzte Fahrt’ lying unused “in the stockpile”, and we’re thinking about how we could best use the piece. That’s when Syderyth remembered the unfinished “Grubenfall” story, which we started on our debut album ‘In finstrer Teufe’ and continued ‘Die Grubenmähre’. Hence our decision to include these two older, revised chapters on the release, along with the exclusive long piece. Generally, I write metal songs and present them to Syderyth. Once a certain number of themes are gathered, he starts to fathom the lyrical concept while refining the songs. So we work separately but still together. In the end, Syderyth always adds little treats, be it keyboard or piano passages or our classic acoustic pieces.

Syderyth: Yes, the text was already there in a rough outline for the end of the story. So the long piece of music for “Die Letzte Fahrt” came in very handy. But since it would have taken up almost half an album, we decided to make an EP out of it and to re-record the two older songs of the story as a bonus. This is how the ‘Grubenfall 1727’ EP came into being.

‘Grubenfall 1727’ is partly an actual event that happened near where I live. The “Ertzengel” mine collapsed that year, and a miner lost his son and other colleagues there. Also true is the part about the princess who owned the mine and used inferior material out of avarice. The rest is literary colouring. For Dauþuz, it is essential that every theme used has to do with mining to maintain the special claim of uniqueness. Of course, my personal views and convictions, such as misanthropy, anti-religion, love of nature, freedom of the individual, etc., are mixed into all the texts and themes.

The lyrics have nothing to do with politics; that’s too profane for our music. I hate politics, a haven of lies. We are both against any religion because it always oppresses people, puts their free spirit in chains, and even destroys it. I’m close to nature, but lyrically this is rather lived out in my other bands. For my part, I only support sensible and useful things. Of the above, only (Athestian) paganism belongs to this. But I prefer to call it natural belief.

Aragonyth: I wouldn’t say that metal, in general, has to be iconoclastic, especially as far as the softer subgenres are concerned. For many bands and listeners, black metal, in particular, must necessarily be anti-religious and evil, but for me, as a non-religious person, that doesn’t have too much relevance. Religion as a belief simply doesn’t happen for me. My religion is nature in all its wonderful facets; nature is tangible and palpable, faith is not!

Syderyth: If you equate iconoclastic with the German word „Bilderstürmerei“, you can say that with Dauþuz, we also do that in a way. Because we destroy the ideal world of the usual mining romantics who do not want to admit that mining has many bad, destructive, ugly and dark sides. That is why we are often unpopular in this scene of “mining enthusiasts”.