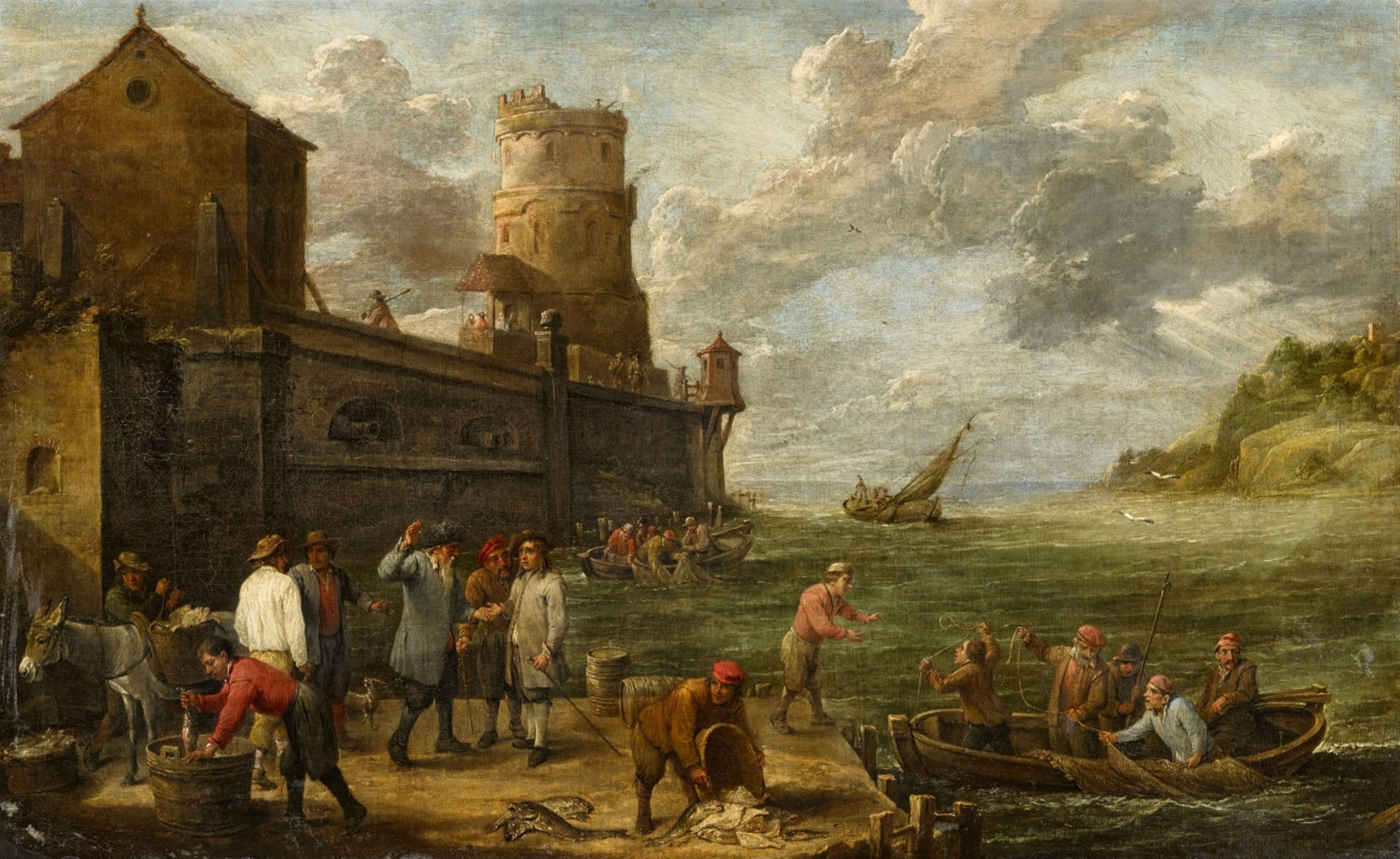 David Teniers the Younger (15 December 1610 – 25 April 1690) was a Flemish artist born in Antwerp, the son of David Teniers the Elder. His son David Teniers III and his grandson David Teniers IV were also painters. His wife Anna, née Anna Breughel, was the daughter of Jan Brueghel the Elder and the granddaughter of Pieter Bruegel the Elder. Through his father, he was indirectly influenced by Elsheimer and by Rubens. The influence of Adriaen Brouwer can be traced to the outset of his career. There is no evidence, however, that either Rubens or Brouwer interfered in any way with Teniers’s education, and Smith (Catalogue Raisonné) may be correct in supposing that the admiration which Brouwer’s pictures at one time excited alone suggested to the younger artist his imitation of them. The only trace of personal relations having existed between Teniers and Rubens is the fact that the ward of the latter, Anne Breughel, the daughter of Jan (Velvet) Breughel, married Teniers in 1637.

Smith’s Catalogue Raisonné gives descriptions of over 900 paintings accepted as original productions of Teniers. Few artists ever worked with greater ease, and some of his smaller pictures, landscapes with figures, have been termed “afternoons”, not from their subjects, but from the time spent in producing them. The museums in Madrid, St Petersburg, Vienna, Munich, Dresden, Paris, London and Brussels have more than 200 pictures by Teniers. In the United Kingdom, 150 may be found in private hands, and many other examples are to be met with in private collections throughout Europe. Although the spirit of many of these works is as a whole marvellous, their conscientiousness must be regarded as questionable. Especially in the later productions, from 1654 onwards we often detect a lack of earnestness and of the calm and concentrated study of nature which alone prevent expression from degenerating into grimace in situations like those generally depicted by Teniers.

His education, and still more his real and assumed position in society, to a great degree account for this. Brouwer knew more of taverns; Ostade was more thoroughly at home in cottages and humble dwellings; Teniers, throughout, triumphs in broad daylight, and, though many of his interiors may be justly termed masterpieces, they seldom equal his open-air scenes, where he has, without constraint, given full play to the bright resources of his luminous palette. In this respect, he often suggests comparisons with Watteau. But his subjects taken from the Gospels or sacred legend are absurd. An admirable picture in the Louvre shows Peter Denying his Master next to a table where soldiers are smoking and having a game at cards. A similar example is the Deliverance of St Peter from Prison of which two versions, curiously altered, are in the Dresden Gallery and the Wallace Collection. He likes going back to subjects illustrated two centuries before by Hieronymus Bosch—the Temptation of St Anthony, the Rich Man in Hell, incantations and witches for the simple purpose of assembling the most comic apparitions. His villagers drink, play bowls, dance and sing; they seldom quarrel or fight, and, if they do, seem to be shamming. This much may be said of Teniers, that no painter shows a more enviable ability to render a conception to his own and other people’s satisfaction. His works have a technical freshness, a straightforwardness in means and intent, which make the study of them most delightful; as Sir Joshua Reynolds says, they are worthy of the closest attention of any painter who desires to excel in the mechanical knowledge of his art.

Although van Tilborgh, who was a scholar of Teniers in Brussels, followed his style, and later painters often excelled in figure-painting on a small scale, Teniers cannot be said to have formed a school. Properly speaking, he is the last representative of the great Flemish traditions of the 17th century.