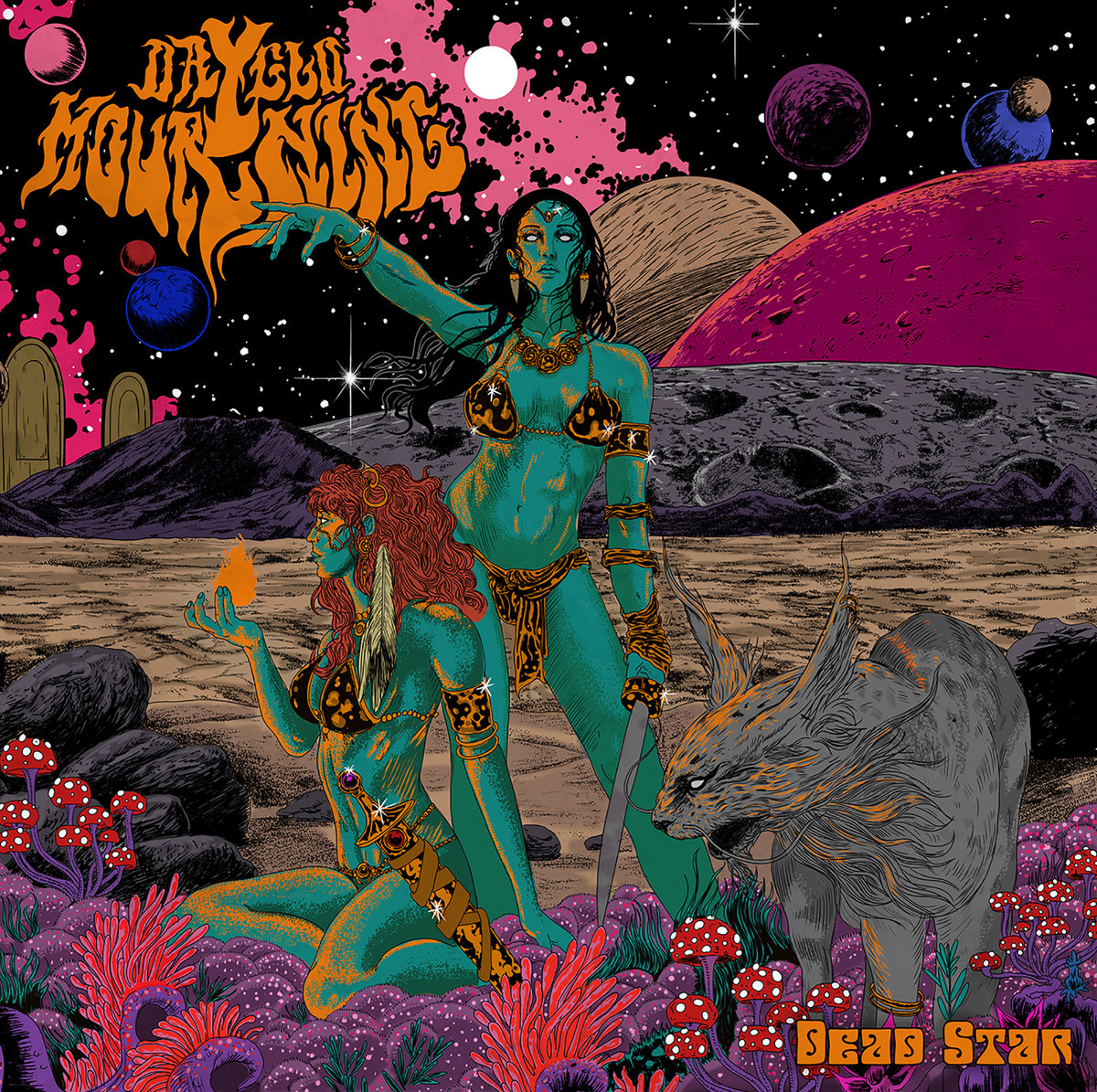 DayGlo Mourning began with Joe Mills, Ray Miner, and our first bassist Matt Rayborn. We all meet through Craigslist ads for musicians wanting to play something in the doom genre. Matt was with us for the 1st year and recorded the first album with us. He eventually decided to move on, and we quickly added Jermiy McNeil on bass, who fortuitously had just become available. Joe and Jerimy had previously become acquainted through Jeremy’s custom speaker cabinet business (Decibel Sound Implements). We then quickly wrote and recordeBusla’s Curse’she compilation album Doombanomicon produced by Black Doomba Records. Since then, we’ve spent our time writing and recording our new release ‘Dead Star’, also on Black Doomba Records.

We had started writing the new album well before the pandemic, thankfully. It was recorded in April of 2020, just after the quarantine had started. The rest of the year was spent completing the artwork, PR packets, video singles, etc. That was the struggle. Everything was happening at such a slow pace, and we were just sitting on our album, not able to play it at shows or anything. That was a test of patience for sure.

We are old metalheads who the usual artist inspires Black Sabbath, Sleep, Electric Wizard, etc. We like the doom genre, in particular, because it is diverse in its varying interpretations. Electric Wizard may be the greatest example of this. Their albums always sound very different from the last, yet each is unequivocally a doom standard. We certainly have the expression that gives us a unique sound among all of the Fuzz going on. And that suits us just fine.

I was always a creative child, but I remember when I knew I wanted to be a musician. I was six years old when I saw Kiss performing on some variety show on television for the first time. I was instantly captivated, and I knew I wanted to do this. As I started to play, the blues became a major inspiration and is still apparent in just about everything I play to some varying degree.

At this point, it’s just the pure joy of playing music with my bandmates, who are two of the best guys I’ve ever met. Working together to create this music is a bonding experience that is all the gratification we need to be honest. Everything else that happens with it afterwards is the icing on the cake.

I can sit in my studio for hours, not getting anywhere. A glass (or 3) of Chianti and it starts just to roll off the strings… or pages if I’m writing lyrics. My mind is constantly jumping from one thought to the next. I think the wine just relaxes me to the point where I can clear all those thoughts and begin to feel more than think about what I’m doing. That’s when it happens.

Up to now, most of the things I’ve written about fall into the realm of fantasy, the occult, or some form of blasphemy. Jeremy is a big sci-fi guy, so I would expect to hear more of that in the future as well. We’re considering doing a concept album next. Some ideas are being passed around for the storyline already, so hopefully, we’ll begin writing soon.