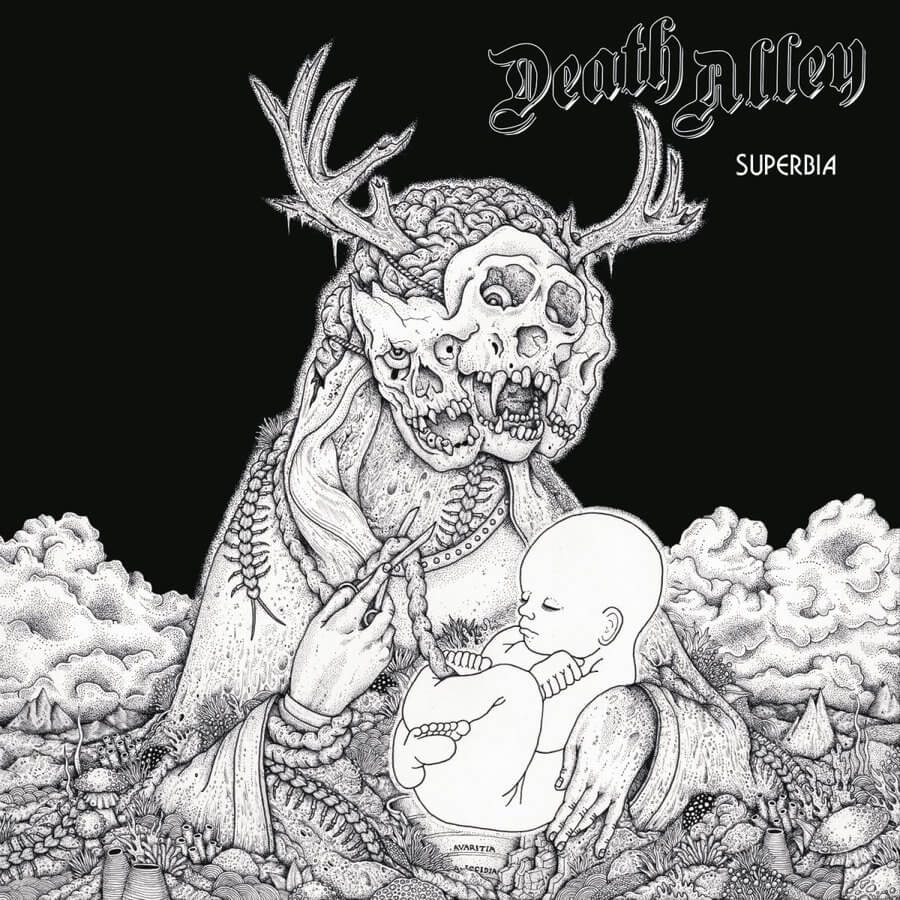 The songwriting and creative direction are a product of the journey we have lived over the past years, ever since we released our debut ‘Black Magick Boogieland’. Keeping our visor open for new musical inputs, while thematically being fuelled with the dirt and pearls of what we go through as a band and as individuals – that is how we intend to work. We got new blood in the band, which brings along new musical energy. That, as well as the process leading up to having this new blood that is the backbone of this record’s sound and songs.

Our goal is to be able to play the music that we want to play and have people hear the music and get elevated by it in whatever way. The more we can be occupied by just playing our music, the better, I would say. It’s a cycle of writing your material, and then presenting it: make records and hit the road. Being on a stage, creating an alternate universe together with the audience, that is indeed the climax of being in a band for me.

The past years have been turbulent, to say the least, and I think the music reflects that. I wouldn’t say it has been the happiest of periods, and the struggle we have had to put up at times is part of the new material’s sound. The final words on the records are ‘From abyss to ascension’, and I think there’s a lot to those words as regards the message of the record, but also as regards future perspectives. At this moment, none of us knows what to expect in the next release – that’s the open visor we got, instead of one clear musical concept we strive after. But some ingredients of our music are firm, the fundamentals so to say, and with the band as it is now, we are free to explore all the extremes of it. I’m hoping for something unexpected.

Playing live shows is my favourite part of being in the band because you see how the music arrives in people there, and that energy feeds back into the show. This is also the case when people listen to a record, but then the feedback loop is less direct. But either way, yes, the experience of the audience listening to our music is very important, because for me this is part of the music: it has a sender and a receiver and that is a recursive process – and it gets better when the lines between sender and receiver blur, like in the situation of a live concert. I guess that goes for most kinds of art – music is only of the art forms. But as to the question about what visual art is to the music, I think it’s highly essential for setting an atmosphere and a feel to the music as let’s say the frame around the sound. I mean, Discharge wouldn’t be the same if it had some funny cartoonish cover art, right? And to be honest, that makes it so hard. The visual presentation of the audio regarding artwork (cover art in particular) is a translation that is beyond my control, so you need to find someone who you trust on interpreting the music. I’m pleased we found John Vochatzer to do the complete artwork of ‘Superbia’ in which he depicts the gem that is born from the dirt in such a fabulous way. Also, the cover vis-à-vis the inlay, the dichotomy that is embedded in it, it has worked out so well and gives the right context to the music I reckon.

Beatles ‘Abbey Road’ definitely is my first real musical memory, which still fuels the inspiration – not very directly but underneath the surface, it’s there. There have been some turning points throughout my life in terms of music, which I remember quite vividly. The first time someone played Nirvana I was blown away by the pure energy that was embedded in the music. A few months later I got introduced to the Sex Pistols and the sharpness combined with the simplicity really grabbed me by the throat. Hearing the catchy but super heavy and dark tunes of Poison Idea and especially how a slow song like ‘Feel the Darkness’ can be 100 times heavier than the fasted hardcore-punk song, that influenced me sustainably. Then later, I guess by the end of my puberty (or am I still in it?) I got taken by different genres within rock ‘n’ roll that keep on influencing me severely, but those early introductions to punk are indeed a solid foundation of inspiration to this day.

In short, to me, music represents self-determination and the establishment of your own (free) sphere. It’s both in the art of the music and the lifestyle that comes with it that music creates (or can create) a parallel universe within the existing physical world. That can be quite direct, by using your music and lyrics as a political tool to communicate something, like you see a lot in punk rock for instance. But it can be something much more abstract too, and it can also be achieved without words as such – by the mere experience of the music and the mental sphere it can get you in. The elevation can be individual but it can also be collective – those things reinforce each other.

What do I believe? This blends in nicely with my earlier comment about the interplay between the individual and the collective of music. In my opinion, the structures we live in are made up of the individuals operating in it. This implies that structures determine what we do, but we also determine what the structures look like: it’s a reciprocal relationship between the collective and the individual.  Nihilism may be something that ignores (or wants to ignore) the powers of the individual in determining the structures, or perhaps ignores this interplay at all, while (over-)optimism may ignore the strong powers of the structure on the individual. I think belief is really the acknowledgement of that interaction, and acknowledgement of one’s own role in that. Belief may be imagination measured along lines of the realisable – and it’s a belief in and of itself to stretch the boundaries of the realisable. I generally believe that it is possible to create something of your own, whether that is musical, spiritual, political, or a combination of all, but I do not underestimate the tenacity of the status quo, even though this status quo is a product of what we do. Well, take the story of our new album ‘Superbia’ as an example: it really reflects on the time we have been through in which we form and of course steer the band – which is empowering and super cool – but in which we are also lived by the band and which has sent us through some dark shit that really reigns over you at a certain point. You can change it, but it’s not something that can be done in the blink of an eye – that process is the story of the record and I guess that ‘From abyss to ascension’ which I referred to earlier is hung up on some sense of belief. I by the way also love to seek recourse in nihilism at times – it feels like an escape button to focus on the hegemony of nothingness.