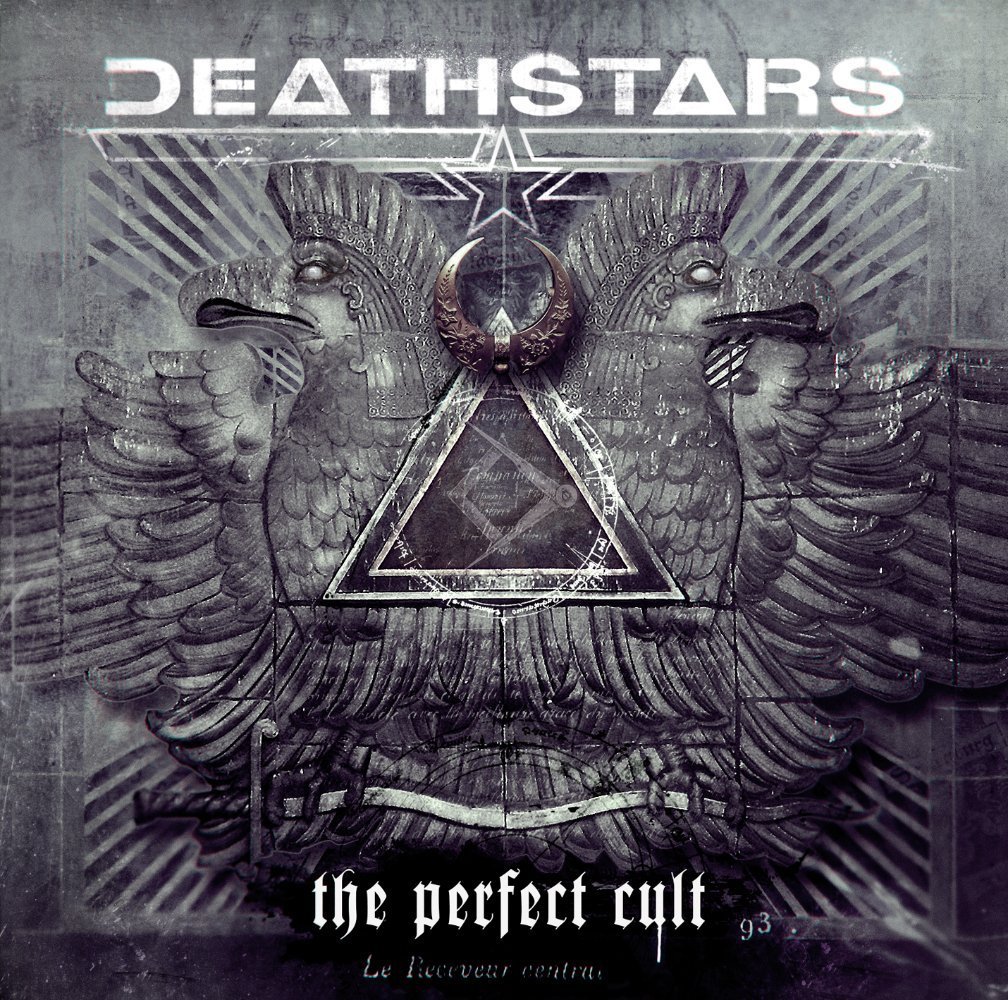 That’s no moon…. It’s Deathstars! New album and the amazing story of the exploding bus tour.

Deathstars are not a band to be easily categorized. This company of Swedes is well known for it’s dark, pessimistic and often misanthropic lyrics. In their trademark face paint and uniforms, they appear to be ageless, almost like living photo negatives. One could compare their eerie stage presence to that of Marilyn Manson but the energy of their performance is more reminiscent of the great high energy rockers the ’80s. Musically amongst their fans, their particular genre is called ‘death glam’ and as far as I am concerned these boys started it all, way back in 2000. Since then many bands in the hardcore and industrial scene have sprung up trying to imitate their sound and visual style. In this interview vocalist, Andeas “Whiplasher Bernadotte” Bergh, and bass player, Jonas “Skinny Disco” Kangur, talk to HMA about the band’s latest album Perfect Cult (2014), their tour and life outside of music.

Andy (HMA): I would like to start this off by saying how damned happy I am to be chatting with you dudes. I love your music.

Andreas: Aw thanks, nice to be doing this interview.

Andy (HMA): My pleasure, thanks for taking the time for Heavy Music Artwork. [I pick up my phone.] Hold up just a sec. Wanna make sure this thing is recording. Don’t want to keep you guys here for twenty minutes just to find out I forgot to turn this thing on.

Andreas: [Laughs] Oh I’ve done that when I interviewed bands.

Andreas: Yes, when I was younger. For example Immortal, I forgot to record the interview and we had to do it again. They weren’t very happy. [Laughs]

Andy (HMA): I learn the most interesting stuff on this job. So how has the tour been?

Andreas: It’s been really good. We started in Russia —

Skinny: We started in the middle of September so we’ve been on tour for a while now.

Andreas: We’re taking a little break once this is done but honestly it feels like we can keep going even after this tour is over.

Andreas: Yeah, this time we almost died. Before all of our near death experiences were party related, now it was more… logistical.

Skinny: Yeah, our bus caught fire in Austria. We were just coming out of a tunnel and we stopped because we thought one of the doors was open but then the driver pointed to a big cloud of smoke coming from the back. He woke everybody who was sleeping, got us all off the bus and it exploded.

Andreas: It caught fire and exploded. So we were very luck to say the least. We ended up in like a ski lodge with the emergency rescue team.

Skinny: And policemen. [Laughs] They were partying and gambling with bullets! It was crazy. They were actually playing cards and raising the stakes with bullets instead of with money. [Laughs]

Andreas: Yeah it was really fucked up and we had to cancel a few of our shows in Italy because of this. So that was the biggest experience of the tour, let’s hope it stays that way.

Andy (HMA): Glad you guys are okay. Wow…. Well let’s get on with more pleasant things. Four albums. Perfect Cult being the latest. Are you pleased with the feedback?

Andreas: [Nods] Mhm. We’ve always had a really die-hard following. People dress like us; they come to all of our shows. They’re really into the death glam scene that we created. Everyone has been really happy with the new album.

Andy (HMA): Tell me about recording the album.

Skinny: On this album we had a different approach because we wanted live drums on it instead of sequence drums. This time we had to write the songs and get into the rehearsal room like a real rock band but it was a new approach to recording for us. I think it was very fun and it really affected the album. It feels more thought-through.

Andreas: On this album it’s more about situations that have meant something to us. Of course always the darker aspects of the things we’ve had to deal with. ‘Explode’ is a about a relative of mine who passed away while we were writing the album. What I’ve always wanted people to understand is that we’re not about vampires and fictional stuff. It all has real roots in our lives. It’s not Manowar. [Laughs]

Andy (HMA): Do you feel you have a pessimistic and misanthropic world view?

Andreas: Yes. I mean it’s a process of digging into the dark to learn something. It’s even in the name of the band. Deathstars. It is the paradox of contrast and challenging yourself to learn from the dark side of things.

Andy (HMA): What? So you’re saying you’re not a Star Wars tribute band? This interview is over. I’m so disappointed.

Andreas: You know someone once asked us if we ever get mistaken for ‘a small moon’ but no, honestly it has nothing to do with Star Wars.

Andy (HMA): No, no, of course. I know the name has nothing to do with the films.

Andreas: This is an interesting story though. When we were first signing with Universal the record label had to check everything surrounding the name. Like with George Lucas and all that. They were worried about it.

Andy (HMA): What does the title ‘Perfect Cult’ mean?

Andreas: The album is a lot about Stockholm. About the city and about the night. It’s about being depraved in general. It’s about the kind of life that we’ve lived and how destructive it can be. It’s about becoming numb to the point that you stop believing in anything. So it’s a sarcastic title about us and worshipping nothingness. It is about nihilism and how far you can go down that road before you start to feel the emptiness in yourself. The lyrics are often about fear and acknowledging your weakness.

Andy (HMA): If you weren’t musicians what would your jobs be?

Andreas: I love writing. Like for TV shows and so on. I think I would do that.

Andy (HMA): How about you, Skinny?

Skinny: I’m a sound engineer as well. I would do that.

Andy (HMA): What is most important to be an artist in any sort of shape or form?

Andreas: Just a lot of hard work. You have to give up a lot in order to do it. It has to be your priority.

Skinny: But also don’t take yourself too seriously.

Andy (HMA): That’s good advice, I think. What is the best and the worst thing you’ve learned about people over the years?

Skinny: I think we’re still learning. I think that comes with losing a lot. When it comes to the industry and even bands, most people are in this thing for money.

Andreas: The good thing is getting to meet so many people. You have to be careful because a lot like you just for what you do. That is more about the girls but as I said you also get to meet some people and you network.

Andy (HMA): If tonight was your last show ever, what song would you end your career with?

Skinny: Yes, me too.

Andy (HMA): Well that was my last question. Thanks for your time. Have a great show tonight, guys. You’re in Cologne next right?

Andy (HMA): I’m flying there tomorrow. I’ll come to see you there as well.

Andreas: [Laughs] Do you play an instrument? You should come and play in the band.

Andy (HMA): An invite from Whiplash Bernadotte? That is going in the interview for sure!