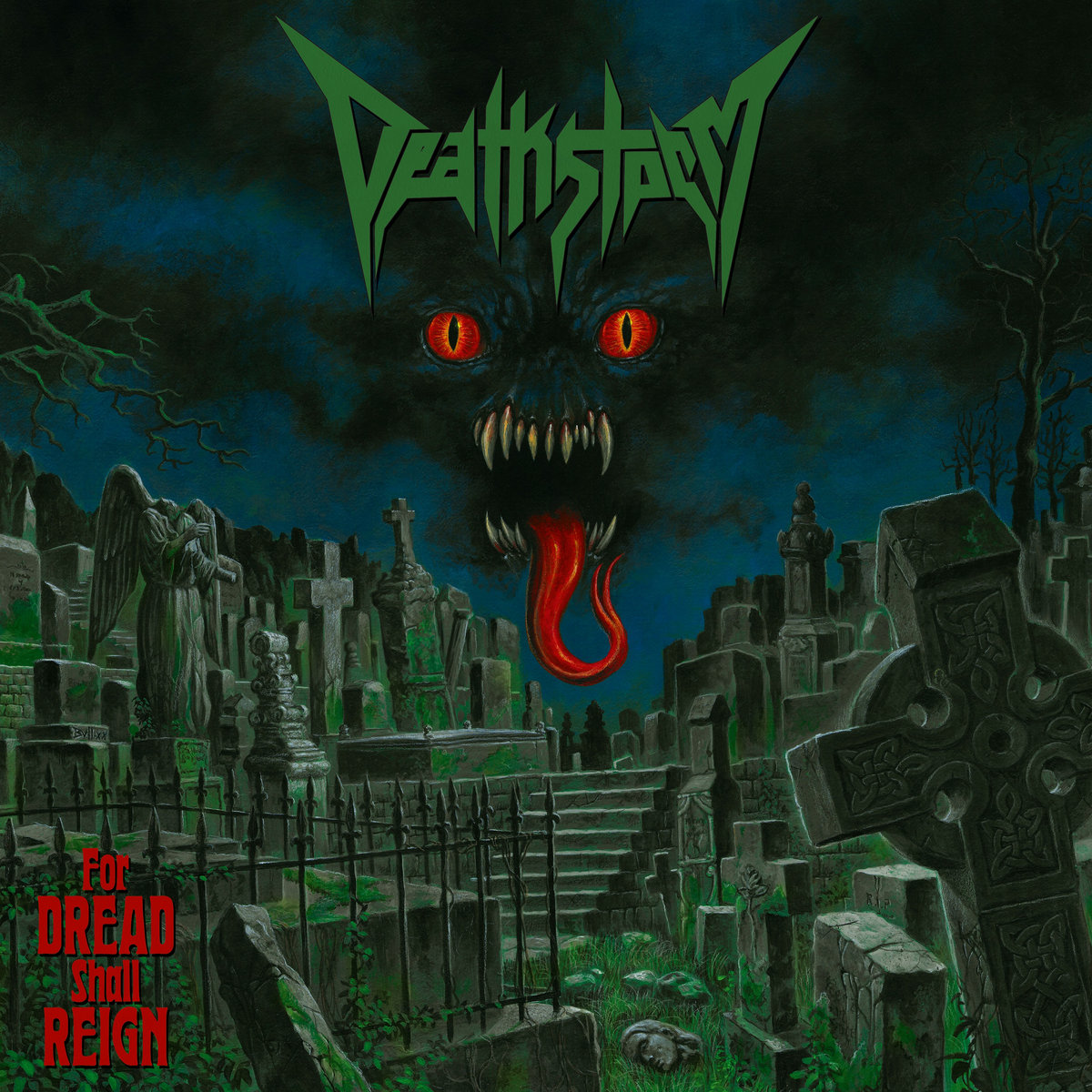 For Dread Shall Reign by Marco Stebich

The band’s name Deathstorm popped up sporadically in my head when I Hate Records reached out to us after having heard our demo. Said demo was released in 2009 under the old band name Damage. Peter from I Hate suggested that we probably should change our name before releasing any official records as there’s already a zillion band out there using the name damage. I guess I was inspired by Deathstrike back then. The name fitted quite well to our then-current material like ‘Prepare For The Slaughter’ and so on. Fast and deadly, something that’ll blow you away.

‘For Dread Shall Reign’ summarises that evil will never go away and will always be a part of our existence. Dread will reign if you like it or not. Look at the world’s situation right now, doesn’t look too bright, I guess. The title can also be seen as an umbrella term for what’s happening in the lyrics that tackle rape, murder, war, mind-control and the likes. It’s a statement that shines a light on who and what humans are.

From our first EP ‘Storming With Menace’ up to ‘For Dread Shall Reign’, nothing has changed regarding style and influences. We are heavily influenced by Metallica, Def Jam era Slayer, early Kreator and Frank Blackfire era Sodom. Those are the bands that inspired us to form a band ourselves. We like our music fast and highly aggressive, like old Kreator and Slayer, but we also like the mid-tempo stuff, in comes Sodom and Metallica. The only thing that probably has changed over the years is that we primarily look at ourselves now when we write new music rather than our heroes. We focus on things that we did (or didn’t do) in the past and how they have turned out, enhance certain atmospheres, and make things better than in the past. That was not the case when we did album #1 or album #2 where it was more like “what did Kreator do” or “what did Sodom do”.

When we first started, we didn’t go “let’s form a metal band, but first check out all the sub-genres that are available”. It’s something that is in us. It’s what came out of our rehearsal room when we first plugged in our instruments and started jamming. One of the main reasons for that probably was back when we were 16 years old; we were on a strict diet of Heavy and Thrash Metal. We didn’t listen to anything else. There were NWOBHM bands like Angel Witch, the nastier stuff like Motörhead and Tank and then Kreator, Sodom, and so on. That’s what we were living on.

Since there were no thrash bands around in our area (we got together during the heights of the Metalcore movement, so there were As I Lay Dying clones everywhere), it probably inspired us even more to start our own thing. To me, thrash represents the wild and free aspects of heavy metal and rock music in general. There’s no elite bullshit going on like in other styles of the genre. Thrash is still rock ‘n’ roll, it’s gritty and rancid, something from the streets if you know what I mean. There’s a lot of passion involved, and I love the punk aspect of it, I like the “let’s do this no matter what” attitude.

Our lyrics almost exclusively focus on horror, both real and fictitious. I’m into genre movies, and I love true crime, so both have found their way into our lyrics. It just suits the music so well. I can’t picture myself singing about overtly political topics or historical stuff simply because it just isn’t me. I like to create my world and drop out of reality, and horror enables me to do so.

I own the ‘Liber Al vel Legis’ by Aleister Crowley and a few other occult books, but it never captured my attention the way other things did. Don’t really care for it at all, sorry.

The artwork was inspired by ‘Eternal Nightmare’ from the band Vio-Lence. I wanted it to have some grimy teeth on it, some dreadful jaws. The second main influence was Walt Disney’s adaptation of Jack and the Beanstalk where there’s this one frame with the giants eyes popping up out of nowhere after Mickey enters the castle. We went for the cemetery scenario as it just is our thing and it worked well intending to make the album “the green record”. The first thing we have in mind when it comes to the cover-art is always the main colour. It also influences the songwriting process on a subconscious level, I guess. There’s no real story behind what you see on the cover other than us trying to invoke an atmosphere that resembles 1980s slasher/creature feature movie posters. I think the atmosphere was captured quite well. The painting itself was done by a highly talented artist called Timbul Cahyono or Bvll Art. He’s from Indonesia but lives in DC. We came across his work via bands like Red Death and Nocturnus.