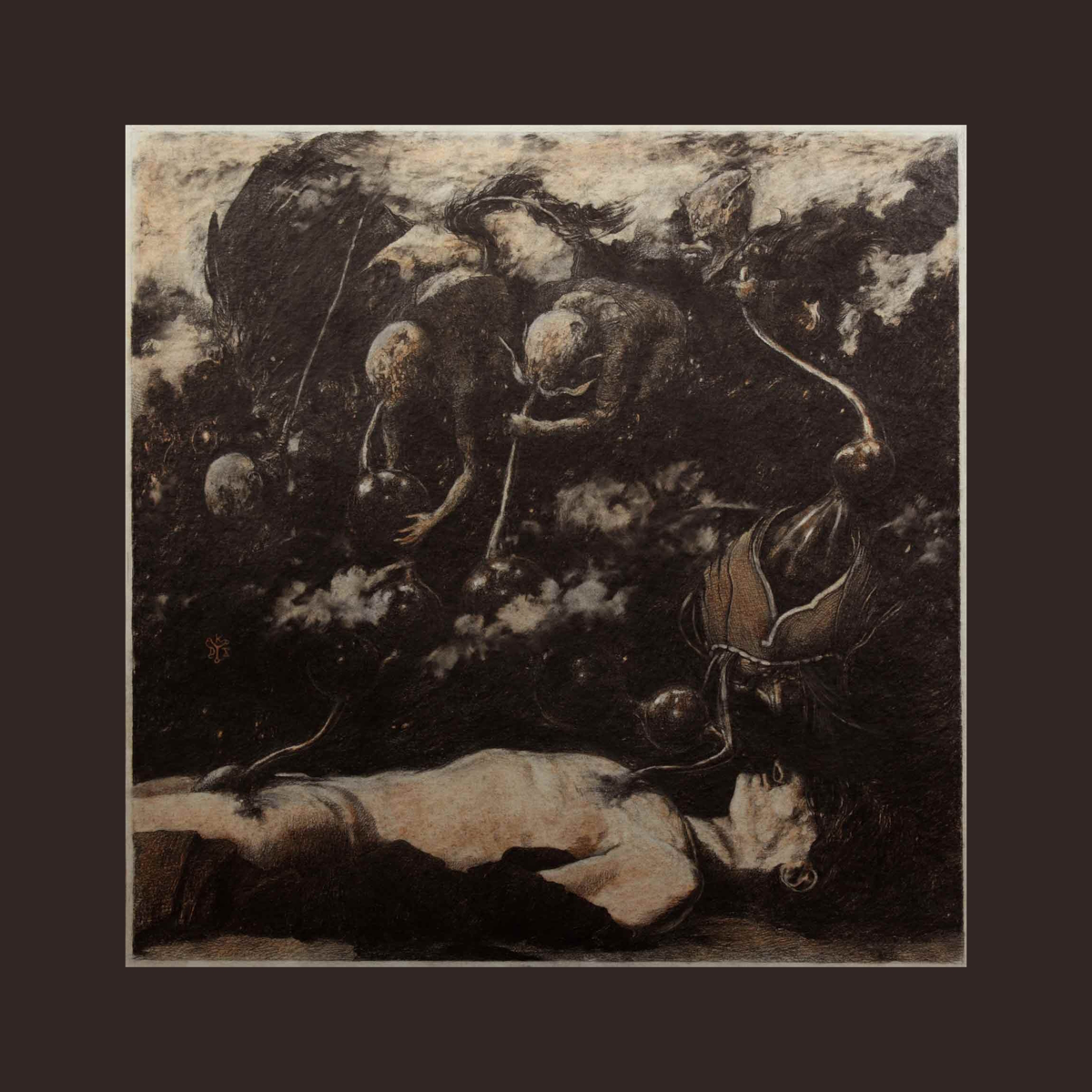 Most Metal fans, know Russian painter, Denis Forkas, as the creator of mind blowing visions for the album covers of bands like Locrian, Horseback, and more recently, the mighty Behemoth. His works are full of cryptic imagery, traditional art overtones and symbolical significance. They challenge viewers to look further and discover a place where poetry, fantasy and the occult rapturously coexist.

In this interview, Forkas revisited his early days as an artist while reveals the stylistic complexities of his art and comments about his newfound creative relationship with the world of Metal music.

HMA: Are you self-taught or formally studied painting?

Denis Forkas: I’m a fully self-taught artist. Still, I feel I must mention that in the early 2000s – thanks to my frequent business trips to China, – I enjoyed a chance to learn some ancient Eastern painting techniques firsthand.

HMA: How important were the socio-political changes happening around you for your philosophical and artistic development?

Denis Forkas: Upon the iron curtain’s collapse I witnessed an influx of junk occult literature. I clearly remember wading through poor Russian translations of Levi’s and Crowley’s works along with anonymous treatises on alchemy and ceremonial magic and spending hours with a magnifying glass desperately trying to discern the sigils in photocopied illustrations. The effort invested in those first studies provided a much needed backbone to my urge and granted bits of insight into matters like energy management, will, balance and intent.

Thus my passion for plastic arts was greatly affected by the interest in history, philosophy and the occult. I should think a Soviet environment would have led me to take an altogether different path.

HMA: At what point did you realize painting was what you wanted to do professionally?

Denis Forkas: The realization came to me in China; I guess one might call it an epiphany. I seemed to have “woken up” to viewing my talent as a duty and wasting it as a sin. It was a trip full of wonderful discoveries and big decisions.

Starting a painter’s career this late (I was around 30 at the time) certainly wasn’t easy as I had to give up all kinds of expensive habits and deal with many poverty-related problems. Sticking to it has been even harder but I’m happy as long as I can have my chance to create something worthwhile.

HMA: Most of your work has a very oneiric, dream-like, quality. How do you channel these visions and transform them into paintings? Is there any specific method you use to achieve this?

Denis Forkas: A very perceptive remark, thank you. Indeed, I will try and capture my dream visions on paper whenever I wake up with a clear image/good memory of some event seen in a dream. I will then analyze all the facets of such visions and eventually use some of them in my work. Dreaming is a solid foundation of my research no matter in what direction I choose to take it.

HMA: There’s also a very ancient, oriental-like feel in the way you paint. You seen to be inspired by both the ancient oriental cultures and also by the Symbolist movement. What’s your opinion about this? Which are your main visual influences?

Denis Forkas: Ancient Greek, Egyptian, Mesopotamian and of course Asian artistic traditions have provided me with an aesthetic anchor of sorts. Most ancient cultures managed to produce artifacts of yet-unsurpassed quality and I feel every artist worth his/her salt should approach this legacy with reverence.

Indeed, I used to be inspired by the Symbolist movement as well as German expressionism and Kandinsky’s early abstract painting experiments in the past, particularly after my Chinese adventures. But as I grow older I seem to wander further and further back in time in search of inspiration. Khnopff and Vrubel are probably the only shards of that old fascination, which I still hold dear to my heart. These days I’d rather prefer to revisit Dutch Golden Age, early Renaissance or the ancient art I’ve already mentioned.

HMA: Esoteric and paganism also seem to be a constant theme running through your body of work. Are your paintings a vehicle to express your philosophical/personal beliefs and views of the world?

Denis Forkas: Well, I see little point in taking things for granted. My art is the result of philosophical investigations, to borrow Wittgenstein’s beautiful title. One way or another we all attempt at making sense of the world and of ourselves in it – in other words, at getting hidden things (the occult) out in the open. I believe artistic expression is the best way to achieve that.

HMA: How you became involved in designing album covers, especially for Metal bands? Are you a fan of Metal music?

Denis Forkas: I do enjoy listening to heavy metal now and then, but I don’t think I like it enough to call myself a fan. A sensible professional will always have to find a more-or-less reliable source of income apart from selling originals: something along the lines of interior decoration of the antique world, church commissions of the Renaissance and Golden Age prints and portraits. Nowadays it is mostly illustration (books, music covers and what not) and prints.

I think my first music covers were commissioned by friends (Keith Utech from the US and the Dead Reptile Shrine collective from Finland). Mythological and religious subjects have been inspiring heavy metal musicians ever since the 70s but modern art doesn’t seem to have much to offer in that regard apart from uninspired generic imagery. So, once the first couple of pieces got out there they ensured a steady flow of inquiries from bands and labels.

HMA: Do you have any immediate plans for doing an exhibition of your art, or book? Are you currently working on any specific commission?

Denis Forkas: I’m working on a few music-related commissions, yes, but I’d rather prefer to keep them under wraps for now. As for the exhibition, I should think the I:MAGE show in London in October is something no collector or art lover would like to miss. It is going to be a vast event held by Fulgur Esoterica and featuring many exciting contemporary artists. I’m proud to be part of this project.

My Fulgur book is still in the works. The progress is slow, but I think it is only natural with an ambitious project like this. So, I’m making no announcements just yet.

HMA: In your opinion, why all these Metal bands and fans feel so attracted and identified with your work?

Denis Forkas: Like I said, heavy metal is a culture deeply rooted in mythology, religion and philosophy and those are the subjects I, too, choose to explore in my work. I’m glad there are still artists/musicians and art lovers/listeners who refuse to comply with generally low aesthetic standards of today. Talent is a great responsibility and I will do everything within my power to not betray my clients’ trust.

Read the interview with Behemoth and The Making of: The Satanist