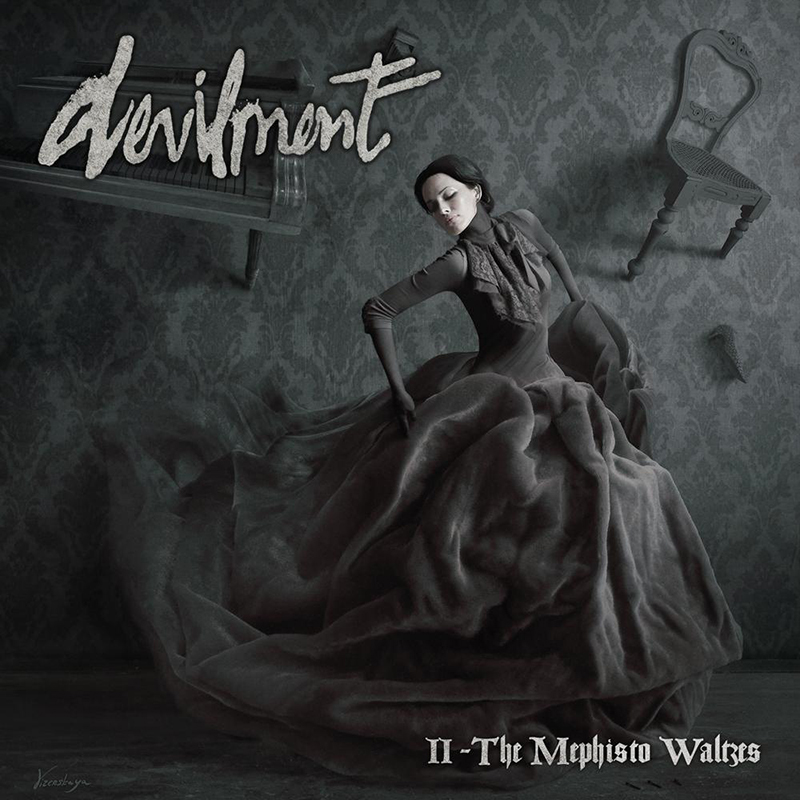 Melodic, powerful rhythms, dark poetic conquests, strong growls combined with clean and operatic female vocals, this is the sound that we can expect from “Devilment II: The Mephisto Waltzes”, the second album of UK band Devilment led by Cradle of Filth’s frontman Dani Filth under Nuclear Blast. Although you can hear his unmistakable voice, the band is fairly dissimilar to COF, it’s very versatile in sound as explained by Dani and keyboardist Lauren Francis at their London show.

HMA: Hello guys! How do you describe Devilment to someone that never heard this band?

HMA: Dani, does your music and style with Cradle of Filth influence Devilment in a way?

Dani: It’s not a million miles away but they are two different entities. For a start, we have different teams, that’s different from the start, I think a bit more accessible than Cradle are. It’s a weird thing anyway. I’m not quite sure what’s going on to be honest. When you have two bands, do you know what I mean? I’m seeing some of my band members from Cradle along the tour. I’m sure they’re not quite sure what’s going on, either. It’s good fun and I’m just really, really enjoying it. Really nice people.

HMA: Lauren was it a challenge joining Devilment since you have a different musical background?

Lauren: Yeah, it definitely was, especially to start with, cause I kind of came in at the deep end and the album was more or less put together apart from a few different songs. Finding my feet, writing keyboards, and also learning some more electronic sounds cause I’d only ever really been writing on piano before. A challenge, but a lot of fun. There’s lots of energy with metal that you don’t really get in other genres, not at the same level. It’s been an exciting good challenge.

HMA: You just released now a new album. What’s the concept and do you have a specific vision?

Dani: No, not really, we only came up with the album title once we actually got the artwork together, to be fair, it was kind of based on that. I think I gave up on doing concept records with Cradle. Four or five bloody, and then after that everybody goes ‘is this your album concept,’ whether it is or not. It can have an umbrella on the cover and they will go ‘well that’s a great concept, that.’ They just assume that everything has to be all linked together. Not really, not as such. You can say the title itself like a Grimoire. All the songs are like from the book of spells.

HMA: Are you involved together in the songwriting?

Lauren: Yeah, but everyone’s involved in some writing, really. We send bits and pieces to each other over the internet and we jam things and change things and pull the songs into their final forms. It’s definitely a big team effort as well. I think that’s maybe something that’s a little bit more significant with this album. It’s got more of a defined flavour-.

Dani: You can do a lot of dissection in the studio. Literally, by pulling choruses apart. The first album you joined halfway through so I guess felt more like a passenger, really. From the beginning, likewise with Colin as well.

HMA: I’m intrigued about the song Dea della Morte. What inspired you about this song?

Dani: The weird thing is the album artwork when we were in the studio. Working on songs is like ‘shit we haven’t actually done any yet, what’ll we do for the artwork.’ I remember this girl, Elena, brilliant artwork. We approached her for one of the Cradle albums and for some reason we never used it cause the guitarist said ‘well what’s that about?’ Blah, blah, blah. I thought “God, I wonder if she still got all that artwork that I want to use.’ If she still had, even though she’s really famous and her artwork is seen all around the world, blah, blah, blah. Her and her agent let us choose like five or six pictures that suited the album. After that, because some of the songs were untitled, that kind of was inspired by the cover, like Goddess of Death. It sounds like a dance. It literally came from the album cover. The title of the album came from inspired by the album cover.

HMA: The “Full Dark, No Stars” video has an amazing illustration style, who was the artist?

Dani: Colin, the guitarist’s sister, actually did it.

Lauren: With the guy who did our first video for Hitchcock Blonde, they worked together until it formed that way. We loved it and they worked really hard, didn’t they? They had quite a short deadline

Lauren: They really worked around the clock for us. We were really grateful for that. It suits the song as well, I think.

HMA: Yeah, it does. So what are the plans for the following month after the UK tour?

Dani: Collapse! Obviously I’m in the studio, straight til now, cause I’m here unless I’m astrally projecting. Straight after Christmas back in the studio with Cradle. We do have Cradle doing a world tour that we’re building up toward for New Year’s. But that’s not out until September, so there’s a four-month window that definitely will be pretty busy. We don’t know what’s happening yet, but we’re finding out quite shortly. It’s gonna be busy next year.