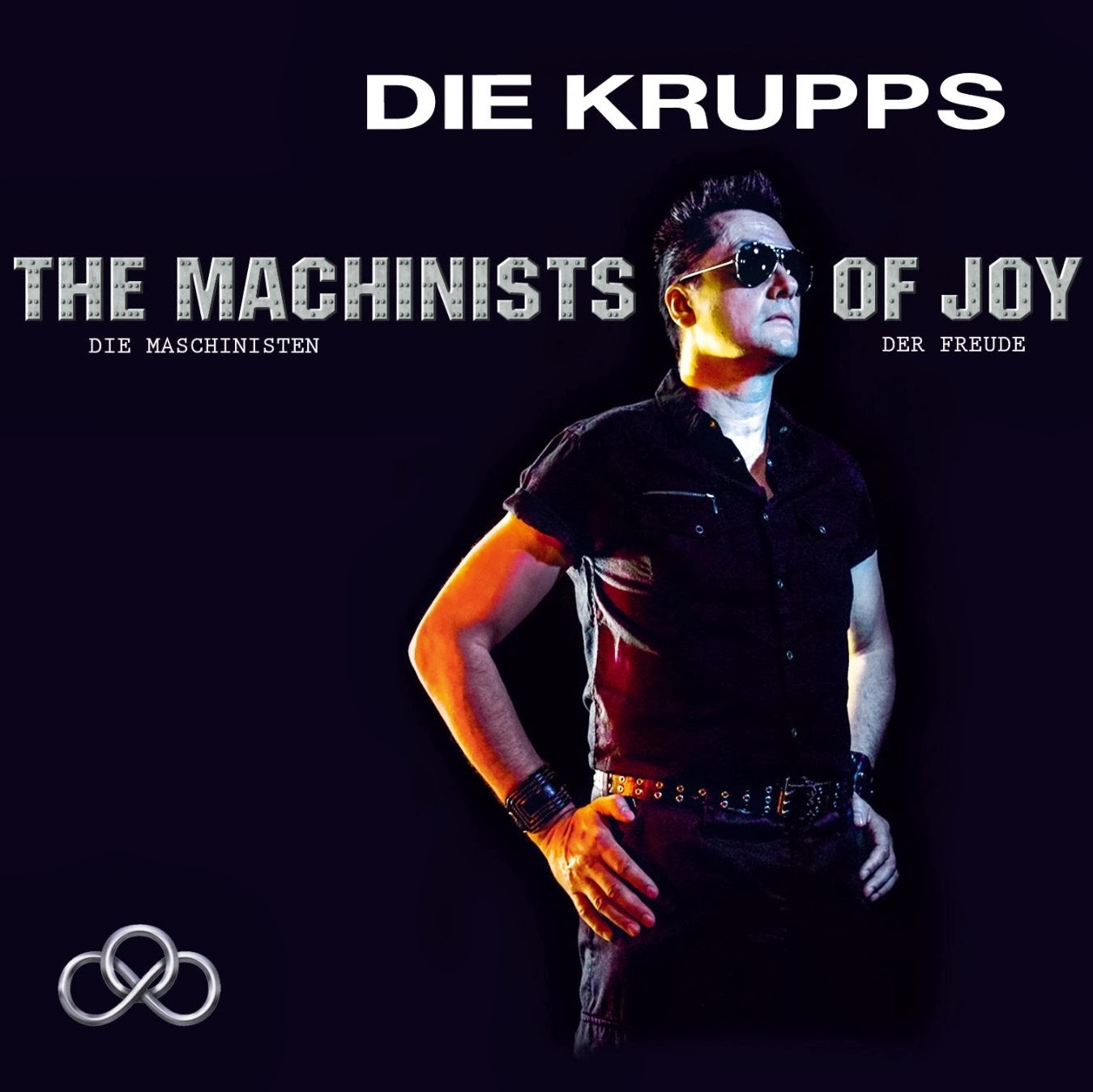 Formed in Duesseldorf, Germany in 1980 by Juergen Engler and Ralf Dörper. Over the years they have produced krautrock-tinged metal-bashing industrial, old-school EBM, industrial electro and, most recently, industrial metal/Neue Deutsche härte. The band’s name comes from the Krupp dynasty – one of pre-war Germany´s main industrial families. This name was apparently chosen for its industrial connotations, as the band is strongly anti-Nazi. Visconti´s movie ‘The Damned’ – a depiction of the fictitious German industrial dynasty of the Essenbecks – was the main inspiration. They are also responsible on what critics consider the best Metallica tribute 1992 ‘A Tribute To Metallica’.

HMA: We all know that Germany is one of the best countries for industrial metal, post-industrial and EBM, goth and so on. Do you think this scene is still growing, like in the 80s, or it’s going down?

Die Krupps: The scene is very big. I think it’s been very big all this time. I don’t think it’s on the decline, and I don’t really think it’s going to grow. I think it’s pretty much where it’s at right now. I think it’s up to the bands to keep it alive; not to the fans. You’ve got to make good music to basically keep them in the scene. That’s what I think.

HMA: Can you tell me what are the main changes compare the early days?

Die Krupps: We went through so many styles, originally we did a lot of experimental and then we incorporated the keyboards, and the music became EBM. It began when we brought the guitars in our sound became industrial, and we went through many different stages. That’s what Krupps is. We’ve always tried to be innovative, always progress and not keep doing the same thing. You know what I mean? In the last album, we basically tried to sum it all up, and have all the styles in one album. Except maybe the true industrial experimental element was missing, but all the other elements, ingredients were all there.

HMA: Why did you choose to make a tribute for Metallica?

Die Krupps: At the time, like I said, I wanted to combine the elements of electronic music and metal. Metallica was probably the most popular band. People really noticed what we were trying to do. I really liked them. They were gold or something. Basically what I was saying is, ’Kill ’em all’, ‘Ride the Lightning’, ‘Master of Puppets’, what was the one after that?

HMA: After ‘Master of Puppets’… ‘…And Justice for All’.

Die Krupps: ‘…And Justice for all’ and ‘The Black Album’ those was the type of albums. I really liked ‘The Black Album’. It just made sense to cover those tracks and convert them into something that hadn’t ever been done before. Even Metallica noticed. Lars and Kirk, they heard and they liked. They were the ones that got us the record deal in the US.

HMA: After 34 years of experience, has the band reached their goal?

Die Krupps: If the goal was to create new music and be innovative and be the forerunners of different styles of music, I think we did. Definitely. The next goal would be to reinvent the wheel, which will be a tough one, but it will be quite a challenge. If we were able to manage to do that, that would be my main goal.

HMA: What’s the plans for the next album, and who’s looking after the artwork?

Die Krupps: In recent years, I worked with other graphic designers but basically… because I’m a photographer originally, so I was looking after them and design and stuff. Starting the early ages, we’d work on artwork, album covers and stuff like that. The thing is, the new album and the music would be a lot more… I don’t want to tell you, because when we mention it, it’s not going to be a surprise anymore.

HMA: Oh okay, sure. It will be a surprise!

Die Krupps: It’s not going to be what the last album was. The last album, it’s like I said, it sums up all the elements of music that we’ve done before. The next one’s going to be something different.

HMA: We will see when it comes out.

Die Krupps: It is different, but it will be something people don’t expect.

HMA: Which album are you mostly into, and which is the best one from your point of view?

Die Krupps: I think our last album’s the best. It sums up the whole Die Krupps. When you listen to the album, I don’t think there’s one weak track. You can listen to it all the way through, whereas, on the other albums, there’s always one or 2 tracks that are not my favourite.

HMA: With so much material, it must be difficult to put a set list together?

Die Krupps: Not really, I think, because we know what the audience wants. On the other hand, we have all the favourites that we can mix. Okay, let’s put it like this. I couldn’t imagine not playing ‘Metal Machine Music’, not playing ‘Fatherland’, ‘To The Hilt’. I know people want to hear. On the other hand, when you get the response from the audience, it’s never boring to play a song that they like and love. The feedback is what we feed on. It makes you happy when they’re happy. That’s the way it is. I would never deny the fan track, even if I would be bored playing it. The second you play it and the audience gets going, it’s amazing. It’s all worth it. Nowadays, it’s more about having a good time and giving the people a really positive feeling. We play and we want to make them happy basically.

HMA: As you look back on the Die Krupps catalogue, is there any album you think were underrated or under-appreciated at the time of their release but in retrospect have really held up well?

Die Krupps: I can tell you, every album did something for the band and it was important. The problem with Die Krupps is that every time we put out an album, except for maybe the last one, we were always a little bit ahead of our times. Let’s say if each of those albums would have come out a year later, it would have probably been an even bigger success. We were always a little bit ahead of our times, which makes it hard for us. It made it easier for people to jump on the bandwagon and did basically the same that we were doing. On the other hand, that’s what you get when you try to be innovative. That’s the way it is; you pave the way for others. That’s fine with me, because that’s what this band was about. That was the way we chose, the path we chose.

HMA: Where did you get the inspiration on naming the band? I believe is related to one of the prominent families/dynasty in Germany, which has become famous for the manufacture of armament and use of slave labours during the second world war and… What’s the concept behind it?

Die Krupps: I want to use a name that was deeply rooted in the German history, and that, when you hear it, you have these mixed feelings, like, what do you think of the Germans? Germany was this strong economic force. On the other hand, we have this horrible past. You have very mixed feelings about Germans. Believe me, I do more than probably any other person because I grew up there. I had to deal with the fucking Nazi on a daily basis when I grew up. Basically, there’s all the old guys who are still around and their kids. I had to deal with that. From a very early age on, I just wanted to get the fuck out of there. It’s like presenting a mirror to the rest of the world – this is basically what Germany is. It’s this strong economic force, but don’t forget their past. That’s what ‘Fatherland’ is about, that’s what ‘Nazis Auf Speed’ is about.

We’ve always been a political band in a way. To me, that was very important, and part of the concept. Originally, first, the idea for the song existed ‘Stahlwerksymphonie’, the first album. I thought what kind of band name would fit that?

Then I thought of all the steel companies, the factories. Then I was like, ‘Die Krupps’, like the movie, ‘The Damned’ by Luchino Visconti, that’s one of my favourite movies. I was like, “That’s just brilliant… Die Krupps; the Die Krupps history.” ‘Essenbeck’, the song, is about that. The intro that we’re playing, It’s a soundtrack from ‘The Damned’. That’s our intro.