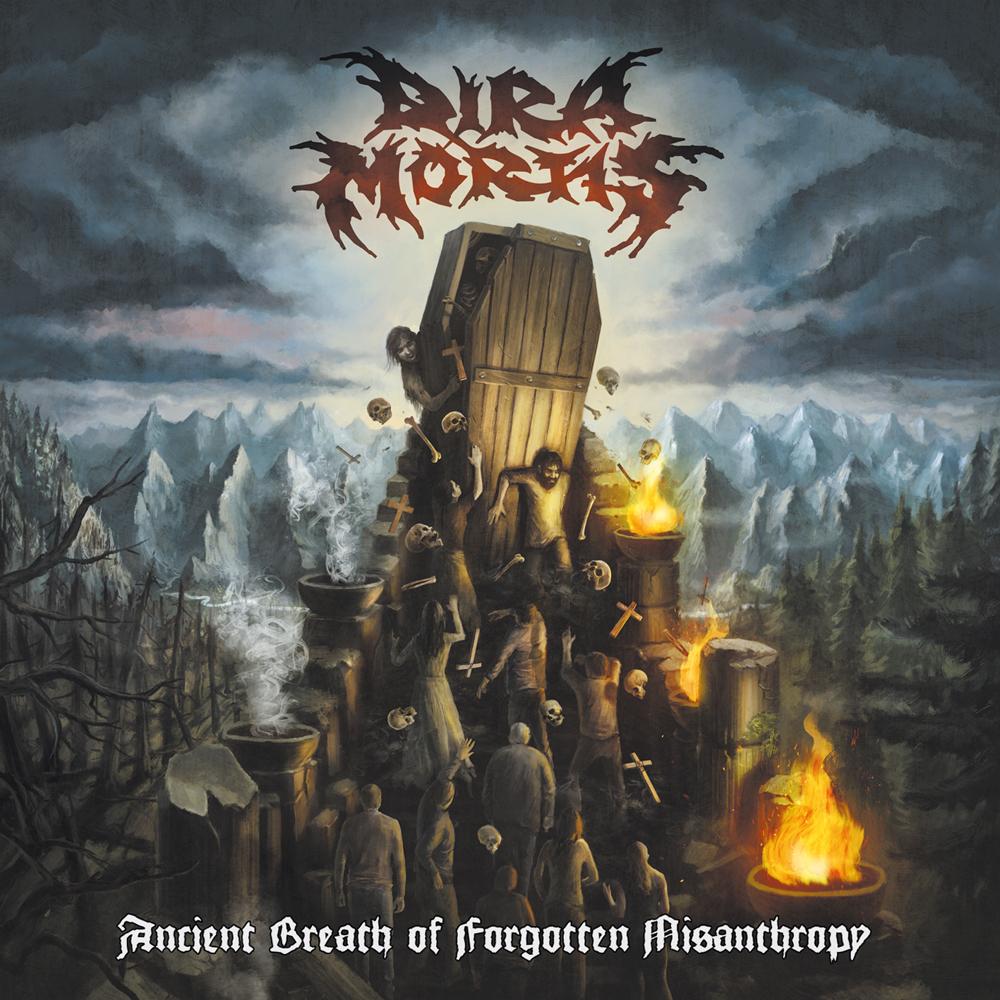 The limitations are always there, not so much in the production and recording of the album, but more in writing and constructing songs for the album. I think that for my most hated there are moments so-called creative impotence because to come up with the right riff, you need inspiration, a reasonably clear mind not preoccupied with everyday life, which is often difficult, as for all of us, and it is not a matter of falling into for the idea, ok today I’ll do half a number. It works for me that it just has to be this day. I need such silence and concentration to focus on my emotions and then translate them into sounds. The second part of the question is the conspiracy theories that you mentioned. Although it has few conspiracy theories at the moment, I think that the last album, lyrical and musical, certainly shows a picture of the corruption of humanity. Today and with the current situation in the world, such a message as contained in ‘Ancient Breath of Forgotten Misanthropy’ could be the anthem of the multitude of mentally ill people who lead us to the fall. The album is a reproach of negative and a few of my positive feelings, a purification. Still, when confronting the listener with the content, in today’s realities, he may perceive it as a soundtrack to today’s tragedy, which I do not fully perceive in this way, but it is a dark one.

The title of the entire album is the idea of our former vocalist Łukasz, who has already left the ranks, not our fault. Łukasz was supposed to be responsible for the title and the lyrical one, but that he didn’t manage to make it this time ended with the title, which we approved and considered a good one. The very concept and tips for the lyrics are my work. Your interpretation was beautifully put on paper by the new vocalist Jakub Brewczyński, the new vocalist of Dira Mortis from this album.

When it comes to meaning, misanthropy has always been present in the history of humanity in one form or another, it is a thing that seems to be getting worse with each age and epoch, and we decided to present the topic from our perspective. I believe that in the current world, it is more visible than any.

In general, I started to be interested in metal in the first grade of elementary school because my sister, when she was a teenager, brought various cassettes like Iron Maiden, Sepultura, Protector, etc. I was intrigued by the covers and the sound content so much. that I became a fan. At the beginning of the 90s in my small town of Gorlice in southern Poland, there were a lot of guys in metal t-shirts there were often concerts that I spied somewhere, we had a great store stocked with patches, T-shirts, cassettes, the most extreme types of metal, of course, everything later died, but my blood was already infected with all of this. Thus, as a listener who scribbled through backpacks and pencil cases at school with the Cannibal Corpse or Obituary logos, I decided to form a band in which I would be able to express myself, and this is still the case today. Death Metal is the genre closest to me, and thanks to this style, I can share my emotions with people who listen to us.

I think that all life has influenced it, a person gets to know himself all his life. The character’s shape is not only good moments; it is dilemmas, diseases, addictions, ups, ups, loss of loved ones, that is your whole life, your everyday life, others influence some things, they happen automatically. At one point, when I grew up, I found that I would never understand this world and what people are to each other, what their priorities are. Because of having many different relationships, it dawned on me that I am at war on a battlefield where I would not be a winner anyway because I have to die and go to another dimension. Summing up the statement, apart from people close to me and the beauty and power of nature, I do not see many positives in everything that surrounds me, which is why music allows me to relieve a bit of the burden of trying to understand all of this, which is why maybe this is the genre I chose and not another because I am giving away my part of the perception and reception of reality.

I think it’s a set of circumstances, experiences of a certain period of your life, which are automatically archived on each album with the moment of recording and releasing. It is a bit different each time; also, in music, it happens. Even though you try to stick to a given style, it will be shown in different colours.

There is nothing special, just how I know that I have something to say, I sit with the guitar and look for the right sounds to express it in musical form, I write down the ideas later I go to Vizun of our drummer who lives 5 hours from my town and together in the rehearsal room we are working on new issues. The next stage is the registration of guitars, drums, and then the rest of the line-up adds their building blocks, and this is how the album with the final is created in the recording studio, of course, also from the purely technical side, you can call it a routine.

In a way, the last album is a lyrical concept, but the earlier ones cannot be called that ultimately. For sure, if we manage to record a new album in the future, we don’t know what it will be, and nobody here is planning it. We have a new singer, and we will see what we agree on, for sure, if we survive these times, there will be something to write about. Another thing is that we have a lot in common, but also a lot that separates us. To write concepts on a lyrical basis regularly, you need to have a common language, this time, and it is the case with the next album; we do not rule out anything.

As a rule, I am the originator of covers and what should be on them, and I always have contact with the artist because the cover is a very important element of the albums. For me, these matters are important, just like every element of the work. The album is a story; it’s a part of you who you are. If you do it seriously, there is no way that the cover will be irrelevant, and the last one was painted for us by Bartłomiej Kurzok. The message is my interpretation of the transition to the other side. It is a symbol of fragility, human existence and such a small reminder, especially for those people who think that it never ends and that it will always be possible to drink, eat, steal, use others, enrich and, of course, in the background, tons of religions soap the eyes of well-meaning others. The cover is my interpretation of this album, the message and the whole thing, but everyone can see it in their way, which I don’t mind, of course.