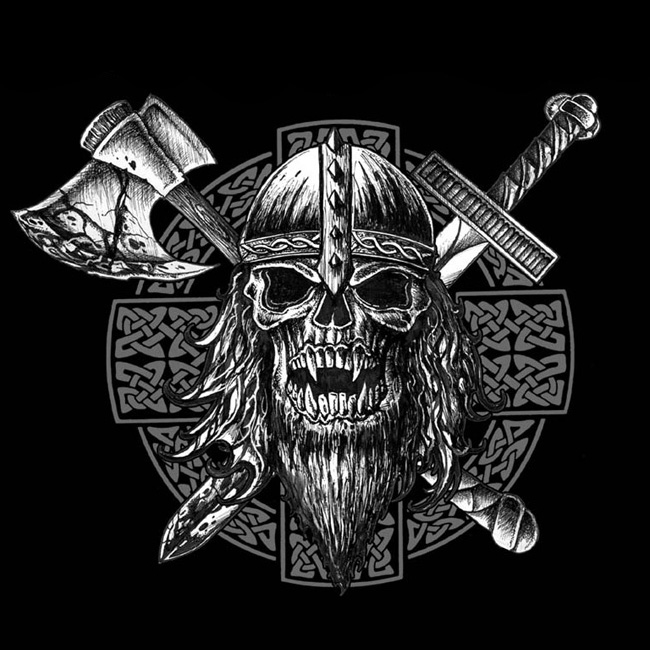 The World of Mike Dragon

The art of German visual provocateur, Mike Dragon, could be described as a cross between horror, fantasy, folklore with touches of dark humor and explicit irreverence. For years, he’s been creating visions that are both unsettling and alluring at the same time. On top of that, ventures like producing fine jewelry and promoting bands via the label, Medusa Productions have been part of his portfolio. Exclusively for Heavy Music Artwork, Mike revealed some details related with his many projects, his visual style and artistic origins.

HMA: Do you have any formal training as a designer/illustrator? When did you started to have a serious interest for visual arts started?

Mike Dragon: Actually I’ve been to a school for Graphic-Design for 3 years, but at the time computers weren’t already a current part of designing, so I started to draw by hand. Furthermore I was in school already one of these guys who painted on everything I had, schoolbooks, envelopes etc….just any piece of paper I found… he he.

HMA: At what point you started to design album covers and logos for Metal bands? Did that came from your interest in the music?

Mike Dragon: After school I had to do my social service and I also tried different other jobs, but I was not very happy with that. As I’ve been a Metal fan during all the years and because I was drawing since early school years, I started to spread flyers, photos and copies of my drawings to bands’ addresses and labels and after some first little reactions I started to name it “DRAGON DESIGN”—the name we have until today. We’re offering band logos, cover artworks, motifs for shirts and tattoos, etc… I also work doing flyers or booklets or CD/LP/shirt, layouts for some companies and so on.

HMA: Your works seem to be a mix between hand painting and digital design. Could you explain more about your the techniques you usually do?

Mike Dragon: At the moment I’m mostly using the Airbrush combined with other techniques, for example brushes and colour-pencils, but also inks, sometimes I’m even scratching with a scalpel to light up some areas, it’s quite mixed… It is, of course, necessary to work also digital a bit, it makes it more easy to paste Logos to the pics or to prepare them for printing already.

HMA: Your illustrations usually portrait fantasy-meet-epic-meet-horror scenarios. Do you any special visual, literary or musical influences?

Mike Dragon: I always admired the fantastic artworks from my first albums I bought, for example the Iron Maiden covers, or the Rainbow “Rising” artwork (done by Ken Kelly, who also worked for Manowar, for example) and also all pictures that dealt with horror, fantasy or even splatter-motives and I also like movies and stories about these themes. Probably for this my concepts deal also with monsters, skulls, dragons etc., indeed that’s what I prefer to draw, but of course another influence comes from the odds of our clients and I try my best to realize them. Of course always the “Metal- spirit” in all cases has the most influence, but i also had clients already who were not involved into this theme at all.

I admire HR. Giger for his very special style, but I also like for example Dan Seagrave, Michael Wheelan, Louis Rojo, Wes Benscoter, Mark Riddick, Boris Vallejo and lots of more artists who are involved in horror, fantasy or even splatter themes.

HMA: When you’re working in an album cover, do you usually request the bands to provide music or lyrics for inspiration? Do you have any other methods to get inspired?

Mike Dragon: Well, since I’ve started to work with Dragon Design, times have a bit changed, in former times Bands told you only about the theme,the title/lyrics and so on, so I could use just those insdpirations. But since the internet, most Bands have a rally detailed idea of what they want, they send samples they found in the net or at least a special kind of style they would prefere…but of course in any case its important to get a feeling for the Band you work for, the best result might be that all are satisfied with the result, the Band and the fans!

HMA: Your portfolio also includes some fantasy-oriented accessories, jewelry and sculptures. can you tell more about it?

Mike Dragon: A very skilled and friendly female agent some years ago, showed some of my arts and drawings to companies who produce jewelry or Poly-Resin-sculptures. It went good some time, but then prices for silver for example, got enormous high and we had to stop it, because there weren’t clients anymore to afford a huge or heavy piece of jewelry. But it was really cool to make this experience and to see what could be done out of my sketches for that.

HMA: You have also designed a huge amount of band logos. In your experience, does the look and the treatment you give the logo depends on the kind of music a band plays?

Mike Dragon: In one word, yes!

HMA: There are designers that refuse to listen to bands’ suggestions or ideas and there are others that fully collaborate with them… What kind of designer are you?

Mike Dragon: Well, of course I try to cooperate with the Bands as much as possible, they are the clients and they should be satisfied with the results! But, I refuse to elaborate any political or fanatic themes, doesn’t matter which direction they are, political themes should not be a part of Metal at all in my opinion! And, when I see already in any description that I’m not able to realize a motif (for example, I’m quite bad in drawing human beings or crowds, for example in battle-scenarios) I’m honest to the clients and tell them, that it might be better to find somebody else for the illustration then.

HMA: The bands you collaborate with are usually very underground… Would you be interested in designing covers for a more ‘mainstream’ kind of artist?

Mike Dragon: Well, IRON MAIDEN got already their artist for “Eddie”, in my eyes nobody can draw him better as he is already, he, he…and some years ago I tried to get in contact with the management of DIO to present my illustrations. Actually I received a very long and nice letter back, but it never came to a collaboration. Huge companies got their own designers, mainstream bands use an artist for years (in average). If I would get the chance to work for some huger acts, I would not refuse and would try my best to get a good result, but I also try this with underground bands already… you never know if they will get “big” some day…

HMA: You also have a small record label called Medusa Productions. Can you tell us more about it?

Mike Dragon: MEDUSA PRODUCTIONS started some years ago, it is managed by me, Mike Schindler (DRAGON DESIGN) and my wife, Conny. At this time we released a Compilation CD named “Dragonclaws” with a lot of bands I’ve drawn for with DRAGON DESIGN, my main company.

The sampler received quite good reactions, so we decided to start something that could promote the bands and my drawings as well. In the beginning all releases had an artwork of DRAGON DESIGN. We started with SOMBER SERENITY, MISTWEAVER, DEAD EMOTIONS but we only licensed the Cds, that means the Bands had printed the Cds already and were looking for a label, but didn’t found one, so we took the chance to cooperate with them because we thought they are worth to get presented to an huger audience. We see MEDUSA not really as a label in the usual sense, it’s more a possibility to “bundle” activities for the bands we work with. And of course we can help them with drawings, layouts, Logos, creating Flyers, etc. Since a few years our good friend Olaf from EINHEIT PRODUKTIONEN helped me and arranged the we even could distribute some Cds via distributors in different countries.