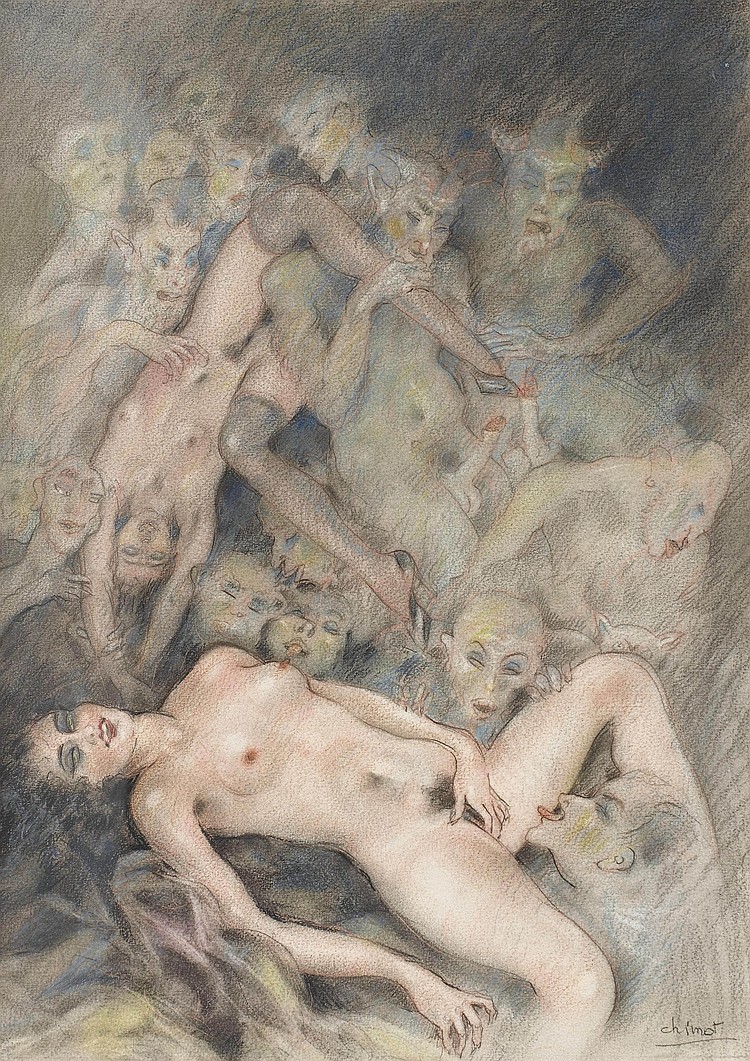 Édouard Chimot (26 November 1880 – 7 June 1959) was a French artist, illustrator and editor whose career reached its peak in the 1920s in Paris, through the publication of fine quality art-printed books. As artist his own work occupies a characteristic place, but as editor also his role was extremely important in bringing together some of the outstanding talents of that distinctive period in French art and providing the commissions upon which the development of their work in a formal context occurred.

Born in Lille, Chimot studied under Jean-Baptiste Levert and Alexis Mossa at the École des Arts décoratifs in Nice, and then under Pharaon de Winter at the Beaux-Arts, Lille. The course of his early career is unclear. He seems to have first exhibited in 1912, rather late at the age of 32, and perilously close to the outbreak of World War I, which was to cause a four-year hiatus in his career, so that Chimot was 39 by the time he really made his mark on the Paris art world. It seems possible that Chimot’s late start as an artist was because he initially trained as an architect – the only evidence for this is an item on the internet from Fodor’s guides, which credits Chimot with the design in 1903 of the Villa Lysis in Capri, for the dissolute Baron Jacques d’Adelswärd-Fersen. He went to Paris at the start of the century and tried various occupations to gain a living, while continuing to draw at night. It was at this time that he bought an etching press and taught himself printmaking, in his rare free time.
In the years before the War Chimot had an atelier in Montmartre, haunted by “jeunes et jolies femmes” who served as his models. His first exhibition of drawings, etchings, and monotypes was in 1912; this was a success, and earned him a commission to illustrate René Baudu’s text Les Après-midi de Montmartre with etchings of what André Warnod termed his “petites filles perdus” (little lost girls). Then came the long interruption of the First World War, during which Chimot was mobilized for nearly five years.

This led to the breakthrough in Chimot’s career by which he became artistic director of Les Éditions d’Art Devambez. Between 1923 and 1931, from his atelier in the rue Ampère, he oversaw the production of a wonderful array of books illustrated by such artists as Pierre Brissaud, Edgar Chahine, Alméry Lobel-Riche, and Tsuguharu Foujita. He reserved some choice texts for himself, including Les Chansons de Bilitis by Pierre Louÿs (1925), Les Belles de nuit by Magre (1927), and Parallèlement by Paul Verlaine (1931).
The crucial decade of his career was that between the end of World War I and the Wall Street Crash. It was during this time of frivolity and excess that Édouard Chimot created the haunting and compelling images by which his name will endure. Not only was he editing an important list for Devambez, but he remained at the same time as director of Éditions de La Roseraie, while also pursuing his own artistic career.

In the 1920s, Édouard Chimot also made at least two films, L’Ornière (1924, also known as Micheline Horn and as Sur le Chemin de Vrai) and Survivre (date unknown). During the glittering Jazz Age, Chimot was forming not just artistic but literary alliances, with writers such as the Surrealist Gilbert Lély, who dedicated the first publication of Ne tue ton père qu’à bon escient to Chimot in 1929. On 23 October of that year, Édouard Chimot must have felt gloriously launched on his late-started career. At the age of 49, he was a significant figure in the Paris art world, a generous patron of his fellow artists, and himself an artist with a public hungry for his late-Symbolist nudes, “soumises à leurs passions mortelles et délicieuses”, as André Warnod put it. The following day came the Wall Street Crash, which wiped out the market for fancy limited editions. When the last of the books in production for Devambez, Chimot’s own edition of Parallèlement, was published in 1931, the game was up. That year a monograph on Chimot by Maurice Rat was published, with a preface by Maurice Magre, in the series Les Artistes du livre, putting the full stop to the glory years of Édouard Chimot.