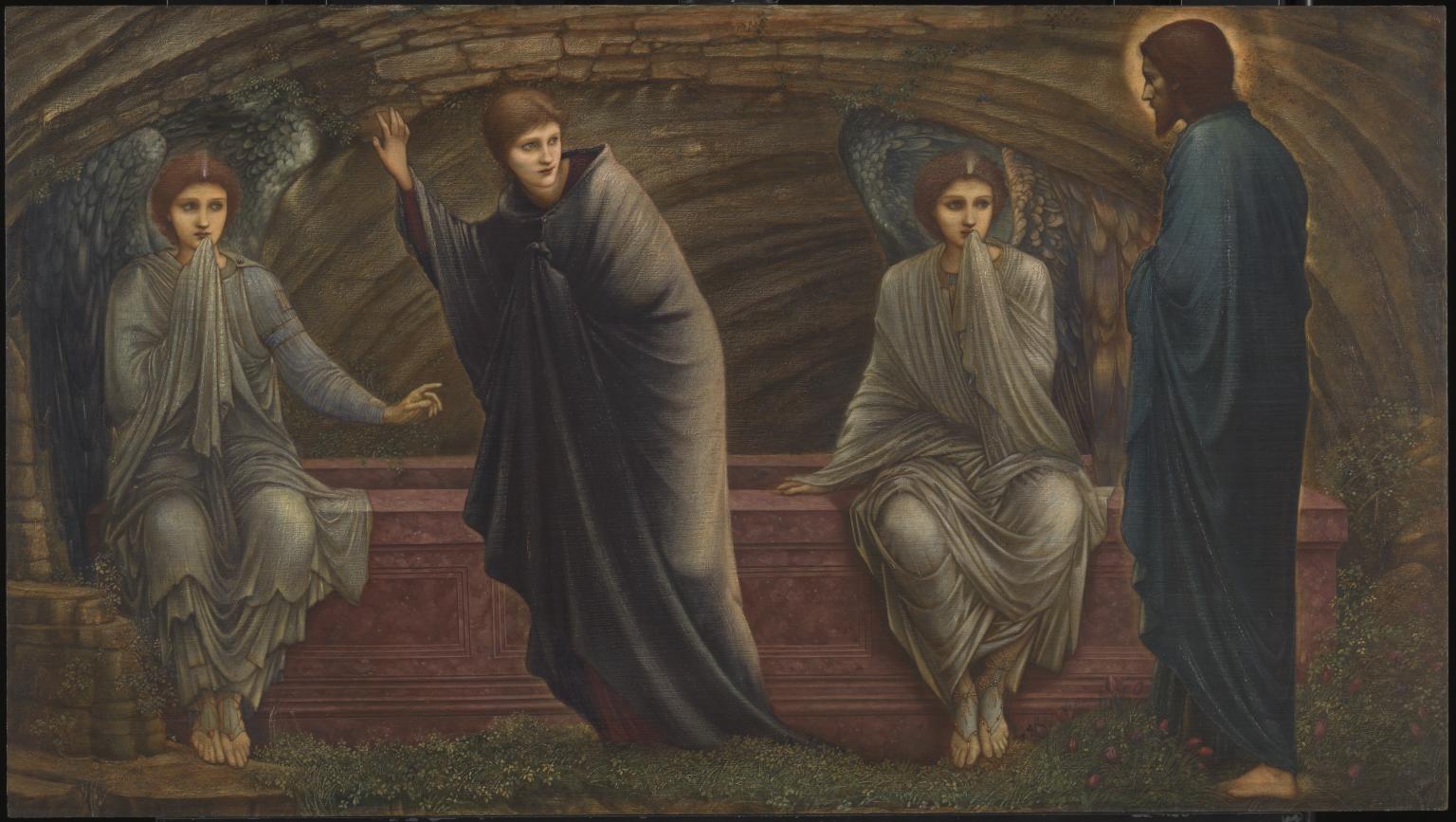 “Burne-Jones is the most important and the best painter of the second wave of Pre-Raphaelites. A poetic young man from Birmingham who, like Morris, was preparing for a career in the church, he never had any academic art training and consequently developed his own very distinctive approach, using medieval models as his template but invigorating them with a completely fresh and modern look.

“Burne-Jones used as his subjects a wide range of legends, myths, and spiritual stories – using images and ideas gathered not just from the Christian viewpoint as previous artists had done. He was not much appreciated early on in his career; it took the opening of the Grosvenor Gallery in 1877 – for anti-R.A. artists to show their work – before he received much critical notice.

“Edward Burne-Jones traveled to Italy in 1859 with John Ruskin where he saw and greatly admired the early Italian Renaissance painters like Botticelli, da Vinci, Michaelangelo, and Mantegna from whose work he took a great deal of inspiration. He greatly admired Dante Gabriel Rossetti and was deeply in his thrall until around the early 1860s when he developed his own distinctive style.

“Characteristic of the Pre-Raphaelites, Burne-Jones took a very long time to compose and paint his pictures; he would frequently leave them for a time and go to work on other paintings, thus working on two or three concurrently.

“Burne-Jones was one of the first artists to break away from the conventional canvas size and presentation of paintings. He was fascinated with strongly linear composition which suited his somewhat flat technique (especially with draperies) and the challenges of presenting and exaggerating the subjects with the size and shapes of his canvases. Sometimes this meant using long and horizontal fields; other times, and more often, extremely tall and narrow as in King Cophetua and the Beggar Maid and The Golden Stairs. This highly mannered style of dreamy, literary romance exaggerates and encapsulates the subject and gives it an other-world intensity that would be lost on a bigger canvas. This also altered the perception of perspective: either particularly deep or very compressed. His figures are always graceful and often possess a languid quality much copied by later Victorian artists such as Lord Leighton and Alma-Tadema. Color was not so important to him as form; indeed his coloring is often sombre and drawn from a very narrow palette. Furthermore his figures often possess an androgynous quality – many of the hoeroes of his pictures have distinctly feminine looks.

“By around 1885 his work began to achieve high prices at auction and he became collected. His reputation continued to grow very slowly but inexorably, until he eventually became the hero of the Aesthetic Movement of the 1880s. Burne-Jones was invited to exhibit at the Paris Universal Exhibition of 1889 where his work was a great triumph with the public. Consequently he was awarded a first-class medal, something that really established him as an important artist and made him famous in Europe. Fame at home was reinforced by the exhibition of his Briar Rose series – based on the story of Sleeping Beauty – at Agnew’s gallery in London in 1890.

“Burne-Jones did other design work for Morris and Co. for whom he produced art glass window designs and tapestries. He had a special love of the medium and became an expert craftsman to such an extent that he lectured on the subject at the Working Men’s College. As with the tapestries, figures were his speciality. He was made a baronet in 1894.”

From “The Pre-Raphaelites”, by Sandra Forty