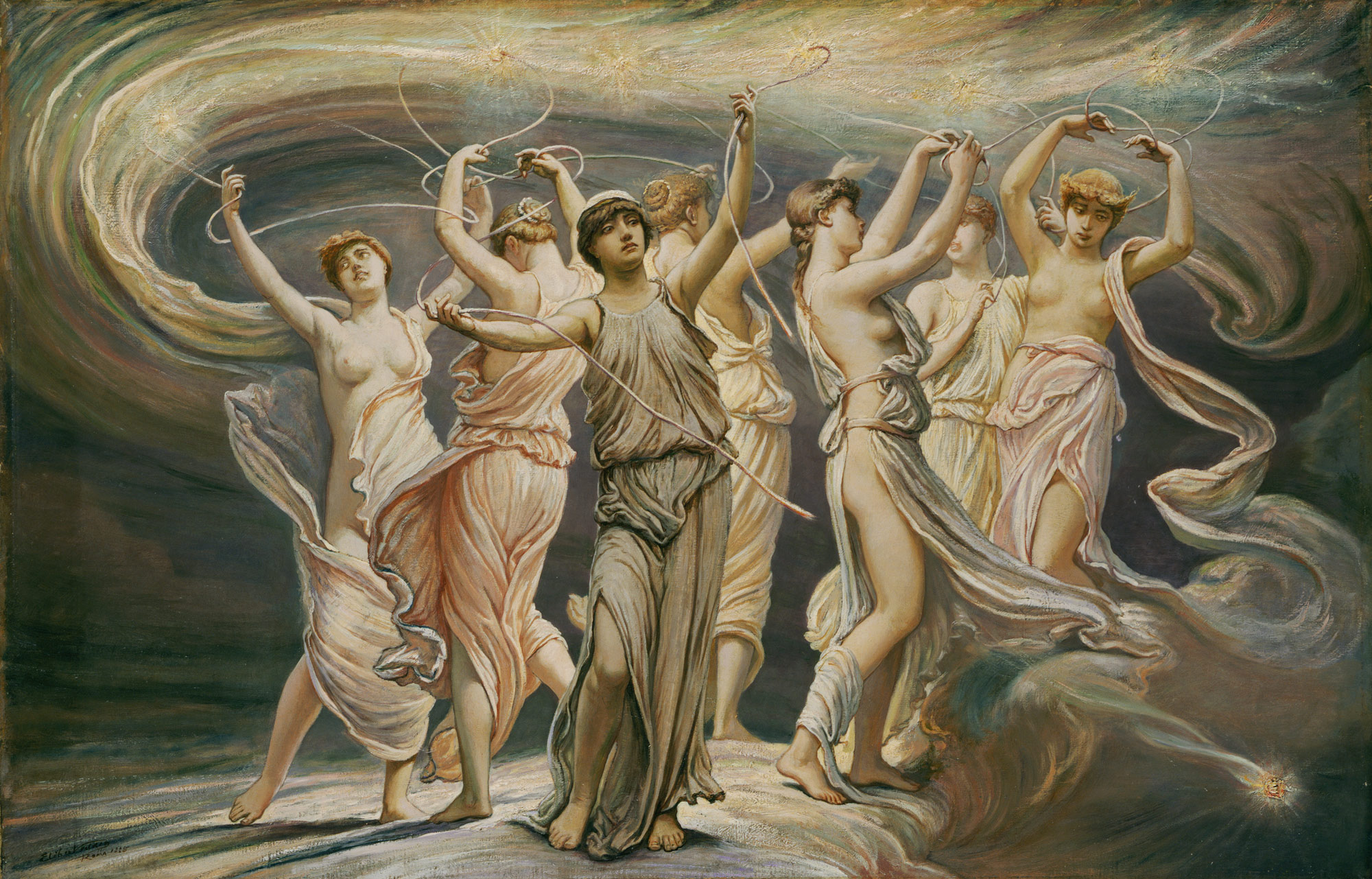 Elihu Vedder is an American artist who never lived in Britain, and finds a place on these pages, along with a few other foreign painters, because his work is so much in the same spirit as that of British Victorian artists, and especially the Classical School. The so-called ‘American Pre-Raphaelites’ tend to be landscape painters, but Elihu Vedder, in his realist pictures showing classical, mythological and ideal scenes, seems to me very close to painters across the Atlantic. Vedder was born in New York City, showed an early inclination to painting, and studied under the genre painter Tomkins H. Matteson (Mathieson) before continuing in Paris for a few months in 1856 under Picot, and then in Florence. He returned in 1861 to New York, but settled permanently in Rome in 1865. For the rest of his life he travelled frequently in Europe and back to America.

Vedder had a strong taste for the mystical and the occult, starting with work of the 1860s such as Lair of the Sea Serpent (1864). In the 1870s he travelled several times to London where he met the Classical painters Alma Tadema and Lord Leighton, and much of his work thereafter is in this vein. Particularly notable in this respect are compositions such as Rome, Representative of the Arts, a semicircular work similar to Leighton’s The Arts of Peace. Vedder travelled in Egypt in 1889-90, and produced various landscapes and Orientalist works then and later.

Vedder worked on line illustrations from the 1860s, when he found difficulty supporting himself in New York as a painter of then-unfashionable topics. He continued with illustrative work even after he established himself, including pictures to accompany his own poetry, and most well-known, 56 illustrations for a version of The Rubaiyat of Omar Khayyam (published 1884). Many of the drawings in that volume were reproduced in art journals, or as engravings – perhaps the most familiar are The Throne of Saturn and The Pleiades. In the 1890s, Vedder carried out various murals during trips to America, most notably 5 murals for the Library of Congress, murals for the Hundington Mansion, New York (1892-4), and those at the Walter Art Building, Bowdoin College, Maine (1894).

How does Vedder’s work compare to his English contemporaries? His compositions and ideas are excellent and bold. He has an interest in drapery perhaps most similar to that of Burne-Jones. But at the risk of offending my substantially American audience, it seems to me that there is a weakness in the faces of his characters, a certain coarseness and unloveliness. This is especially apparent in his single figure studies and mythical pictures concentrating on just faces – there is something of profundity missing. A contemporary journal put it thus: ‘his form remains common while his idea is almost always distinguished’.

Works by Vedder appear in England occasionally in loan exhibitions, but I am unaware of any on permanent display. His paintings are to be found in American museums. The Chicago Art Institue has Fates Gathering the Stars and A Glimpse of Hell or Fear. Lair of the Sea Serpent and The Questioner of the Sphinx are in the Museum of Fine Arts, Boston, and The Roc’s Egg is in the Chrysler Museum, Norfolk, Virginia. A medieval genre painting, Music Party, is in the Springfield Museum of Fine Arts, and among his various landscapes, an excellent Egyptian Landscape is in Phoenix Art Museum, Arizona.