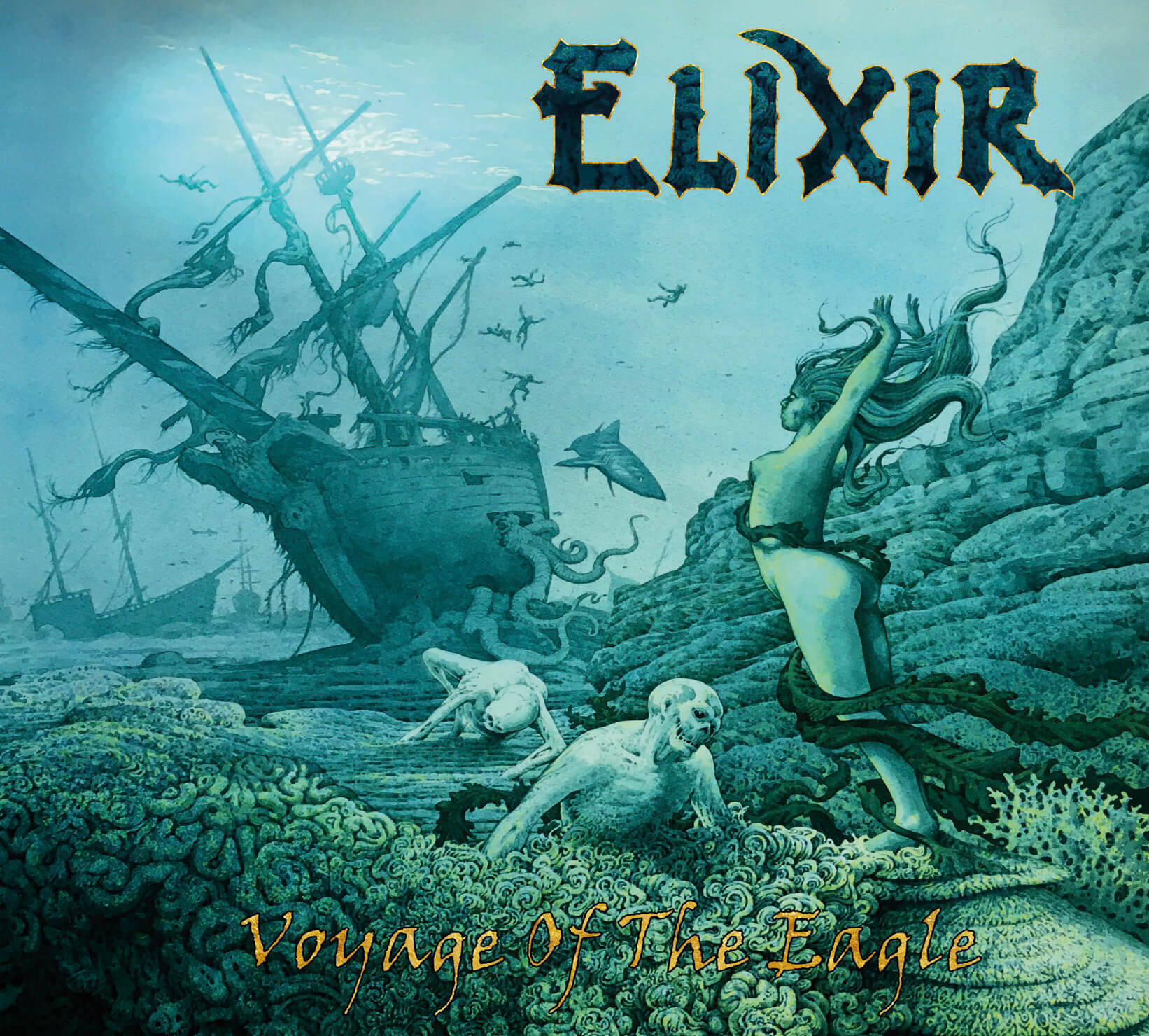 Voyage of the Eagle by Phil Denton

I think it is hard to choose the right name for your band. We started in 1983 and toyed with the names Purgatory and Hellfire, but both were rather corny. We wanted something a bit more subtle. To us, Elixir is an alchemist’s potion, created through magic and sacred elements, to prolong life. It has that mystical element to it, and, I think, doesn’t pigeon-hole us as being one type of rock band. Not content with our initial ideas for names, founding members, bassist Kevin Dobbs and original guitarist, Steve Bentley, were trying to choose a new name for our band one day. They opened a dictionary, closed their eyes and pointed to a word which turned out to be Elixir. Steve was a printer by trade and designed the logo. Once we saw the logo and liked it, we felt convinced that this was a suitable name for us.

I think Ciruelo Cabral’s fantastic artwork on our ‘Sovereign Remedy’ album cover, of the alchemist making his potion, illustrates the image in my head of what Elixir means to me. I am pleased to say that Dissonance Productions will be re-releasing this album on vinyl very soon, featuring his wonderful artwork, as a double album in a beautiful gatefold sleeve. You can see Ciruelo’s fantastic artwork on his website: www.dac-editions.com

The title ‘Voyage Of The Eagle’ was just an obvious title for the story. The new album tells a story of a crew of seamen and their journey to find a dead man’s buried treasure. It documents their adventure from when they first hear of the treasure in a tavern, press-gang a crew, set sail and survive the temptations of The Siren, storms, mutiny and cut-throat crewmates on board their ship ‘The Eagle’.

Our inspirations and influences are the great bands of the 70s that we were listening to in our teens and early twenties – Black Sabbath, Deep Purple, Rainbow, Thin Lizzy, Michael Schenker, Dio and Judas Priest. I think our musical style is a mix of all of those influences and has been since we started back in 1983. We have stayed true to our musical style, and haven’t changed to fit in with any modern trends. We feel that we should give our fans what they expect and like our music. Following the new album release, we have had fans telling us that the new album is what they had hoped for and expected from Elixir in 2020, and that is what we wanted to hear. The new album probably won’t be popular with those who are into the more modern and extreme forms of Heavy Metal, but for those who like the traditional and classic heavy rock bands, I think they would love it!

Lots of sub-genres didn’t exist when we started out in 1983. I find them bewildering, and cannot keep up with it all. To be honest, I don’t take much notice of modern music these days and am probably unaware of most sub-genres. It’s all just rock music to me, but people always have to put your music in a category. I suppose it is a way of helping to describe what you sound like. When we formed, we were just a British heavy metal band, but soon found ourselves being described as a New Wave Of British Heavy Metal band. We are often put in that category and have recently featured on two of Cherry Red Records NWOBHM box sets. But then, our debut album, ‘The Son Of Odin’ was named as one of the “Top 20 Power Metal Albums Of All Time” in Terrorizer Magazine, and one of the “25 Greatest Power Metal Albums” alongside bands such as Queensryche, Cloven Hoof and Helloween by Metal Hammer. So, I suppose that also makes us a “Power Metal” band!! I don’t really mind what label we are given, as long as there are people out there who like to listen to our music.

I grew up loving what was called “Heavy Metal”, but would probably be called “Classic Rock” these days. I was so into the music that I bought a guitar, learned enough to start writing songs and then formed a band with like-minded people.

I can remember the thrill and excitement I got from seeing the bands that I loved live, and I wanted to be able to give that same excitement to an audience through my songs. I didn’t form a band to be rich, famous or get girls. I did it because I wanted to be able to stand on a stage with my guitar and move people. And do you have a philosophy associated with the style?

Yes, to try to write the best songs that we can. Whether they be fast, medium-paced or slow songs, we want them to be catchy, have melody and have feeling or emotion in them. The feeling and emotion can come from the power of a heavy part, or from a beautiful melodic guitar solo, or from Paul’s expressive vocals.

We don’t have a specific subject matter, but we try to steer away from politics or being controversial. We just want to entertain by telling interesting stories. I think the most controversial song we have written is ‘Born To Die’ which says that there is no God, we just live and die. I can see that that song might upset some people, but we didn’t intend to deliberately do that. Everyone is entitled to their beliefs, and good luck to them, we were just expressing ours.

I don’t know about Viking Metal, but we have the song ‘Son Of Odin’ from our first album. Did Viking Metal exist in 1986? We mainly tell stories, and our subjects have fallen into the folk tales, horror and fantasy categories. The new album is like a pirate adventure, so if there is a “Pirate Metal” sub-genre, then I guess it would come into that. Our previous album ‘All Hallows Eve’ was themed on the Pagan and Celtic rituals of Samhain, performed on Halloween, so if there are ‘Pagan Metal’ or ‘Celtic Metal’ categories, then that album might fall into those pigeon-holes. We don’t try to write on a specific subject, that would be restricting for us. We just want to tell stories with music and entertain, just like a story-teller might sit around the fire and entertain.

I don’t practice the dark arts at all, but I have read the odd books out of interest. As an atheist, I don’t believe in God or the Devil. However, I wouldn’t dabble with seances or mess around with an Ouija board. I have no idea about spirits or demons, so why mess around and possibly bring misery into my life? I guess, to me, the definition of the dark arts is worshipping Satan or summoning up demons and spirits. Stuff I personally wouldn’t want to mess around with.

The artwork for our new album is a fantasy painting based on the story of our album. We approached artist Duncan Storr, who had done the artwork for our previous album ‘All Hallows Eve’ and had done a fantastic job. As with the previous album, Duncan asked for some demos to get the feel and story of the album. He said that if he could get inspiration from the music then he would agree to do the artwork. Luckily for us, Duncan likes our music and ended up not only doing the cover artwork but also illustrations for each song for the 24-page lyric booklet. It makes the release a very nice package. The cover depicts the final song, ‘Evermore’, and shows the ship in the story, ‘The Eagle’, sunken on the sea bed, with The Siren calling the lost souls of the crew to her. Their lifeless bodies float away to the surface. Duncan has a website at www.duncanstorr.co.uk and can be contacted by email through his site.