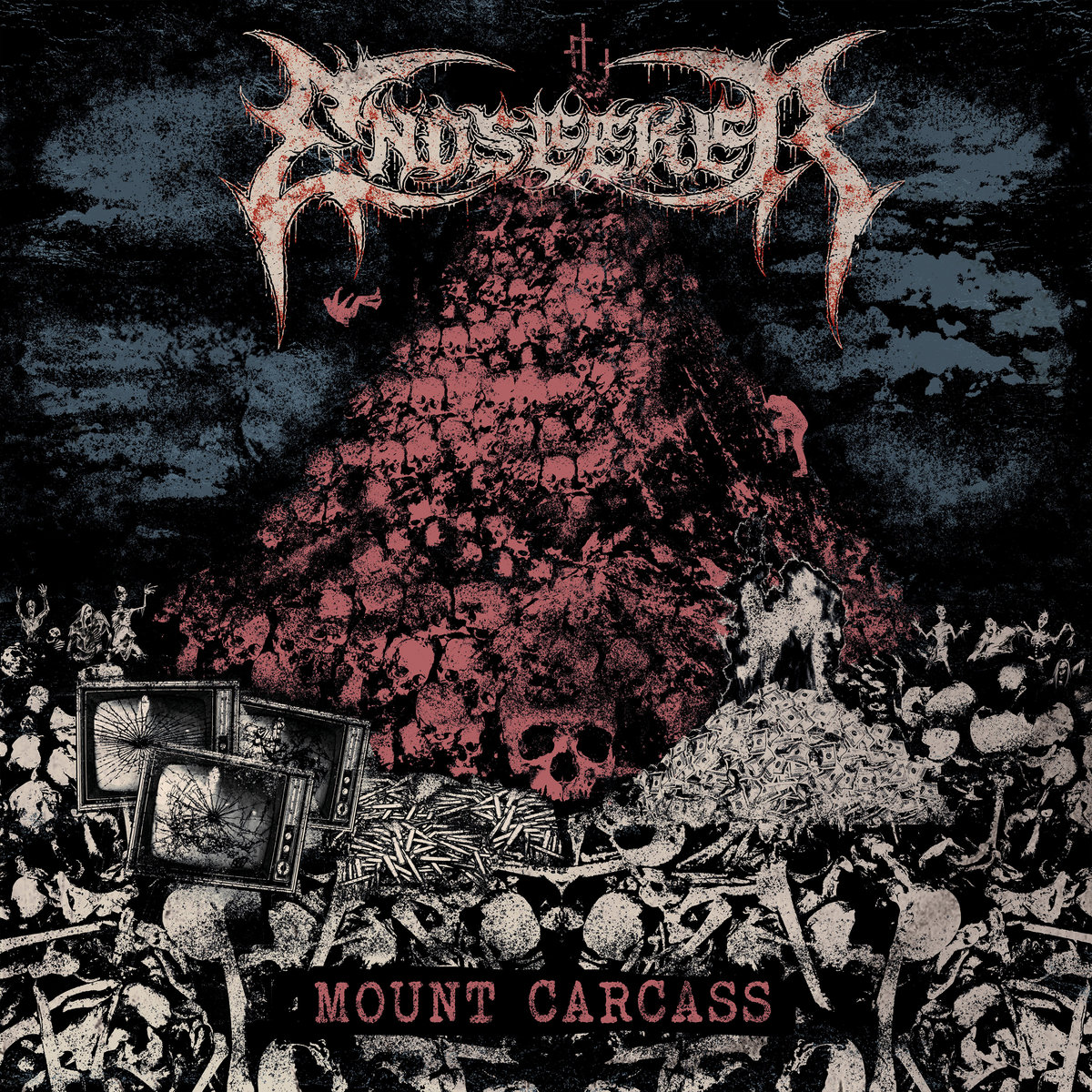 With Endseeker, we’re playing old-school-based death metal in the Swedish flavour. We’re highly influenced by the Stockholm sound of the 80s and 90s but always spray in some stuff from other influences. We’re not strictly limited to a specific genre but try to cross some borders and simply write music we think is cool. It always comes from a dark place, though, and we’re trying to add some good melodies which get stuck in your head and support the overall atmosphere.

We started writing around April 2020 while most of the planet went into some lockdown and nobody was able to tour. We didn’t want to waste our time waiting for some change but dived right into the creative process of songwriting. With no interruption from any tour, we could entirely focus on the songwriting, which felt pretty damn good. It was the right thing to keep ourselves busy and pushed us to creative heights where we wrote some of the best songs we’ve ever written. It brought us even closer as a band and gave us the confidence to make things a bit outside of our usual comfort zone, also when it came to the artwork.

The lyrics on ‘Mount Carcass’ are a bit different than on our previous records since Lenny, and I wrote the lyrics together this time. Due to the craziness of the pandemic and the whole world turning to shit over time, we added some lyrics that dealt with pretty straightforward social and political issues. And given the state of the world today, it still seems quite up-to-date lyrically. I guess we all wish it would be different, though. On the other hand, we also have some of our typical stuff on the album where we talk about weird animal behaviour and other creepy shit that inspires us. We’re definitely not limited to one theme or so. We use whatever crosses our path and pushes a button in us.

We get inspired by many things. It’s the downfall of society, bizarre animal stuff, creepy human behaviour, fantasy stuff, whatever. Usually, it starts with an instrumental song layout with a certain feel and atmosphere that asks for specific lyrics. The music seems to dictate the topic, and then we try to find the right words to fit in there.

We’re five individuals, and we all have a different view of the world, so there’s no overall answer to this for the whole band. But we definitely share certain views, beliefs, values and a sense of humour. In general, we’re not religious or spiritual guys; we’re pretty rational, down-to-earth dudes, I’d say. But we share a musical vision. When we start playing together, things fall into place and feel damn right. It’s like a machine where all parts work together perfectly. This has no philosophical background in the first place. It’s just about the music and the energy it carries. As I mentioned before, the lyrical aspect and the themes we cover just come up naturally. The music demands it. For us, it’s all about music first.

I was introduced to metal at a young age of about 9 or 10. My older cousin gave me a cassette containing Metallica’s ‘Ride The Lightning’, and that tape turned my world upside down. I was fascinated by that kind of music and loved it so much that I started to look for more music, which eventually led to all the other great stuff from the late 80s like Slayer, Megadeth, Sepultura and whatnot. MTV’s Headbanger’s Ball was the platform to discover new music, and I recorded every episode on my VCR to find new stuff. That’s how I got drawn into this music; I have never left it. Without early Metallica, I wouldn’t be here making music, I guess. That’s what made me take guitar lessons. I wanted to be that guy on stage, shredding riffs as loud as possible. So I started my first band very early and worked my way through several bands until I ended up in Endseeker 7 years ago, and I’m more than happy with where we’re at now.

Music, to me, is definitely more than just entertainment. Music = life. A world without music would be a dead rock tumbling through the cold nothingness of space. Without music, there’s no magic. It’s the soundtrack of all our lives. I don’t know if I’d call it spiritual because I personally don’t believe in any higher power, but music can touch your inner self like nothing else. It can trigger you emotionally so hard you burst into tears, go crazy in the moshpit or make you smile like an idiot. I believe music is the only real magic that exists, and everybody can enjoy it in their way.