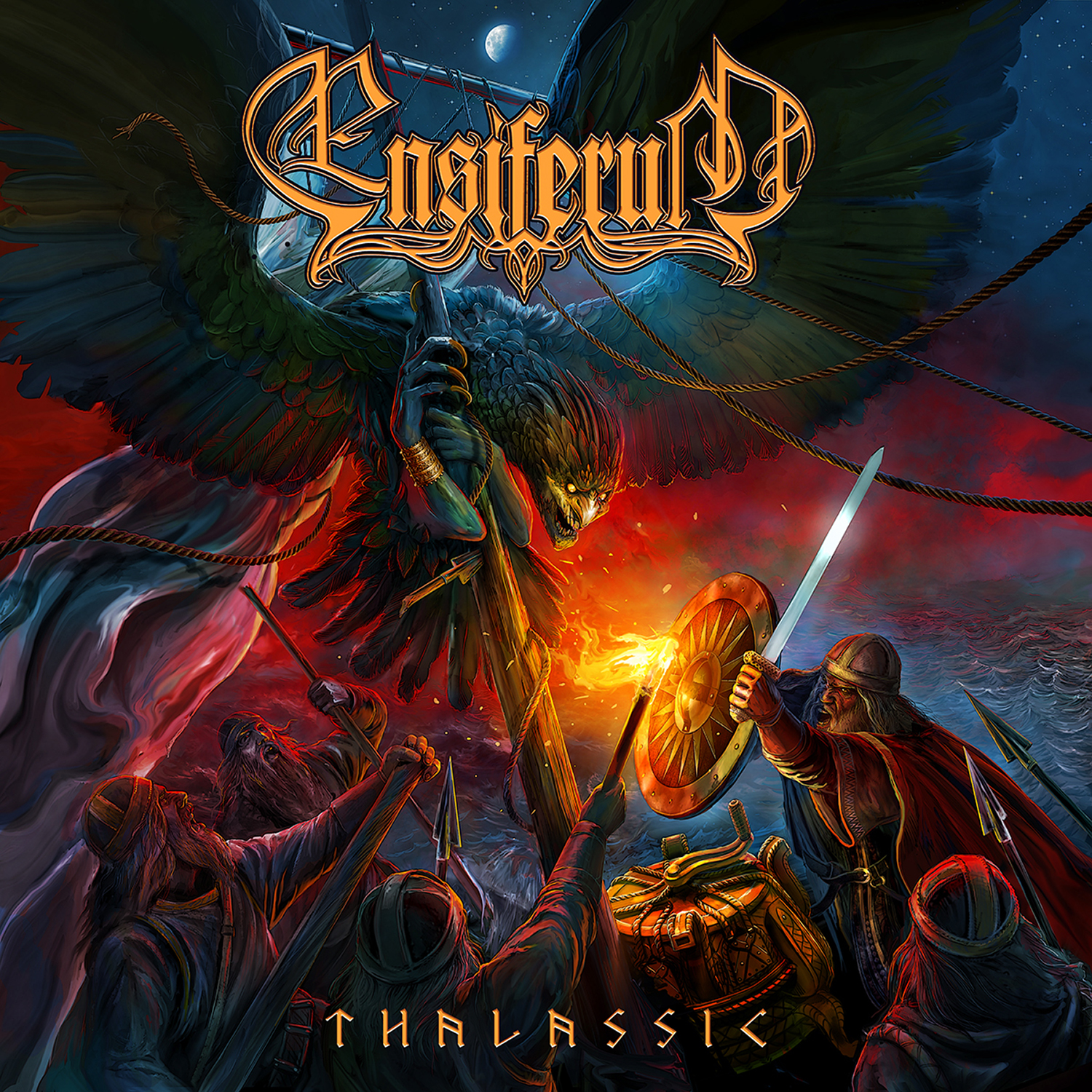 Back in 1995 when Markus Toivonen (guitars, backing vocals) founded this band, he was at his friend’s home and started to go through Finnish-Latin-Finnish dictionary and there it was ‘Ensiferum: The one who carries a sword’. It fit perfectly the ideas he had for the band; heroism, fantasy, medieval-ish and metal as fuck!

‘Thalassic’ is Ensiferum’s first theme album. The title means ”something related to sea” so the theme is quite broad but it also gave lots of freedom for me as a lyric writer. I read a lot about sea or water-related myths, legends and historical events around the world and in the end, I had way too many cool ideas for the lyrics but I’m very happy with the result. Ensiferum’s lyrics have always had this heroic -feeling and lots of nature references in them so nautical stories fit our band perfectly.

I guess one could call Ensiferum ”heroic folk metal” because we have folk elements in our music but we have never put any barriers for ourselves and that’s why we always try to go forward and push ourselves even more as composers because there is no point to keep repeating yourself album after album.

Of course, there are many bands and genres that have influenced us and we are not ashamed of those. One can easily hear influences of Iron Maiden and other heavy metal legends in our music and also old school melodic death metal but also traditional folk music vibes from Nordic countries and for example Ireland. And like I said that we have no boundaries, there are spaghetti-western elements in our material and there is even a disco-part in one of our songs and the crazy thing is that this song ”Two Of Spades” is one our the most popular live songs we have!

I guess back in the days the term ”folk metal” wasn’t even founded yet. I guess it was (and still is) all about creating music that the band loves to play. Of course, the heroic, nature-respecting lyrics were part of the mentality but also to create kind of escapism based music without any political/religious agenda. Just good music with metaphorical lyrics.

Many people refer us as ”a Viking metal band” even though we only have few songs that actually are based on ‘Edda’ sagas but it’s ok for us because it kinda tells a bit about the band’s mentality but unfortunately not all. Most of the lyrics are based on real-life events but then through metaphors they are brought in to Ensiferum’s fantasy/heroic world. I don’t think we have that many restrictions in the band lyrics-wise but I guess you will never hear us singing literally about something modern. Even though I love technology but in Ensiferum’s music there will always be Viking ships and no space ships.

Unfortunately, I don’t really follow popular culture news so I have never heard this term “dark arts”. I Googled it and the first entry was something with Harry Potter! I like to read a lot and I have read all the Harry Potter books but I really doubt that you meant that, hah! Sorry for not having any better answer here but I will rather be honest than writing BS.