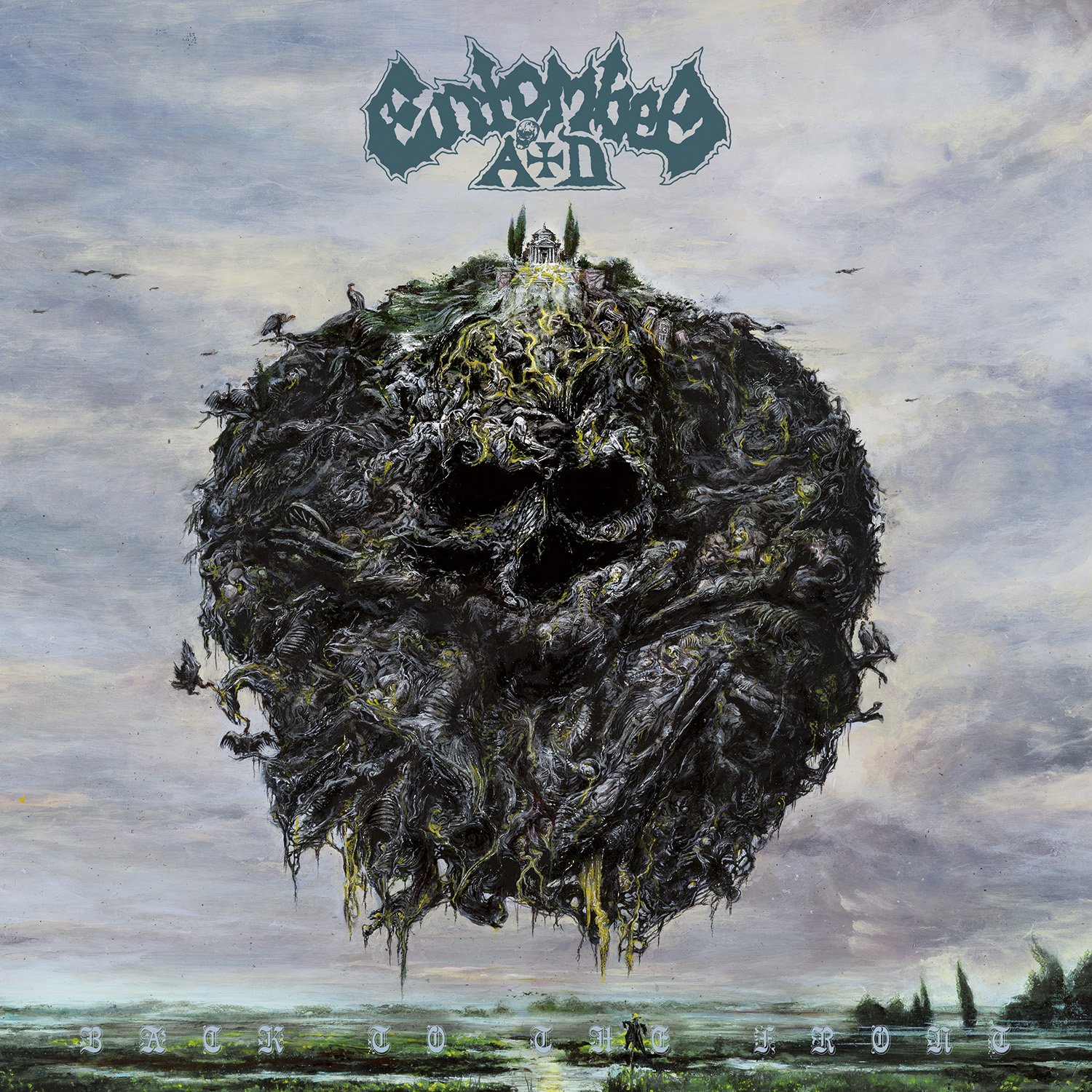 Entombed A.D.: Back in motion

Entombed is a band that needs no introduction at all, they definitely shaped metal music especially death metal and have been since the very first amazing album “Left Hand Path” in 1990. It is now been 7 years between their late “Serpent Saints-The ten Amendments” in 2007 and their new record “Back to the Front”. Entombed are now back in motion and they are already writing new material and touring non-stop around the world all through the year. I caught up for a few beers and a chat with the man himself, Lars Petrov to talk about his music career, road life, new plans and the new record.

HMA: Tell me about the new album “Back to the Front”, what is the concept behind it and how has the response been so far?

Entombed: The concept is a war on zombies, basically. It came out in August, I think. Finally, it came out and we’re happy about releasing albums. Release an album, go on tour.

HMA: Why did it take you so long?

Entombed: I have no idea. There was nobody in charge that wasn’t in charge. Things didn’t happen but then we made it happen. Then we go out on tour, there’s nothing much to it, you know. That’s what bands do. We can’t just sit at home and expect things to happen.

HMA: How do you approach your writing and are the lyrics important for you?

Entombed: Me personally, I’m not a lyrical person. If I buy an album I don’t bother you know, with the lyric sheet before me, I just…you know, If there’s a death or evil in the lyrics somewhere, I’m happy with that and I see myself in the front row.

HMA: Are you involved with the creative process of the albums artworks?

Entombed: For this album, we just told to be like, I mean, do what you feel like. Because I think artists, they work better if you don’t tell them what to do. That’s why they are artists; make them do what they do. And then he came to us with some ideas and we’re like, “Yeah, looks good.”

HMA: Is this Beliak, the same guy that does the covers for Watain and Ghost is that correct?

Entombed: Yeah, he did a great job. It was good.

HMA: Do you think between all the albums, your music is well translated into your covers?

Entombed: Yeah sometimes it is, but when I look back at it right now, the first album “Left Hand Path”, there you have the path and with “Clandestine” I don’t know if it has any connection. In the new album, there is a little world above the Earth. It’s our little sick minds living there.

HMA: Your style of music differentiates from the usual death metal sound, was that intentional since the very beginning, did you wanted to do something different, to bring a change or it was simply a natural process?

Entombed: We went astray sometimes maybe a little bit too much. Experimenting is fine but not too much because then you get lost and your fans get lost. But don’t worry about it. We are back on the right track again.

HMA: What are your musical influences?

Entombed: When we started out, it was Suicidal Tendencies, Sex Pistols and stuff like that. The punk era and then it involved into death metal now. Nowadays it’s kind of the same.

Entombed: There are a lot of them but for me, they didn’t even release the record. They are called Devastation from Chicago. Nobody knows about them. But the singer there, Troy Dickson he is great and I’m very influenced by him. I can send you a link or something later.

HMA: The death metal scene is huge in Sweden, which bands do you think are the best, especially thinking about new bands let’s say the last 5 / 6 years?

Entombed: That’s a hard question. I don’t actively go out and search for new music. If it comes by me and it’s good then yes, then you pick it up. But yeah, in Sweden, there are a million new bands. You don’t have time to go through them all. That’s why you just relax and let them come to you. I can’t specifically say right now. Maybe there are damn good bands. But, you know, I stick to Unleashed but its members are not around anymore. Grave, the old boys are still around. Also about the new music, I don’t even have a computer with me and I’ve no music on the phone.

HMA: I read somewhere you don’t have no computer in your house, is that true?

Entombed: No, I have a computer… but it’s broke and I mostly play video games but is really slow so I can only play Half-Life 2 because it’s great is a first-person shooter.

HMA: How’s this tour been so far, have been sober any one day?

Entombed: Well, we went out for six weeks before this and there were guys on the bus that were less sober than me if you put it that way. You go up for your morning piss and they are sitting like 7 in the morning… I’m not the worst.

HMA: You have been in the music industry for a long, long time, what do you think has changed and is there anything you dislike about it?

Entombed: No, I don’t hate anything really. It’s all part of it. You just adjust to it and go along. I got a good team with us, thing is great, stuff is happening. If you work with each other as opposed to against each other, things happen, it’s not that hard. Every time an album comes out, that’s a fresh start. It’s like holding the first record in your hand over and over again. You don’t lose that feeling. It’s nice.

HMA: And then every time you go on stage, is it still the same?

Entombed: Yeah, it’s like you never played the show before. Every show is different from the other, Yeah that feeling of almost puking is a mix of being nervous with excitement and happiness. Is all positive aggression, if you go backstage, you will hear me go… It is, all in all, a very good feeling.

HMA: Anything memorable and crazy that happened to you on tour?

Entombed: I’m sure things have happened and I’m sure they stay on YouTube. What goes on tours stays on YouTube. It’s been a lot. We have a videotape of lots of crazy stuff. It’s in VHS, in my mother’s cellar. But I’ll grab it up before it disintegrates. There’s stuff on planes, things you are not supposed to and stuff like that. There’s one of us, I won’t mention who it is, had a hold on the video camera and he takes a piss on the plane then you see the toilet is in the back, you can see the toilet in the window or in the mirror. So, this is wrong? It’s OK. Stuff like that. There’s been a lot. I can send you a list…Just go through the censorship filter.

HMA: What is next for Entombed now, what are your touring plans and how long are you on the road for?

Entombed: Hopefully, we’ll go there next year. We have a South American thing in March, I think. Then after these two shows, we go to Norway, we go to Russia, Israel, we go to Greece and then we finish this touring cycle with Black Christmas in Sweden in December. You should check that one, it’s two days. We play on Friday, but then I saw Sodom was playing on Saturday.

HMA: Any new plan all ready for a new album?

Entombed: Yeah, we are going to start writing when we’re home. Maybe not early next year but we’ll see what happens. But it’s not going to take six years.

HMA: As you said before you are now back in motion.

Entombed: Exactly. We might record the album before December but then at least it’s already done.

HMA: Are you planning to play at any festivals this summer?

Entombed: Yeah, we’re going to have some, yet to be confirmed but it’s all coming together, it will be a good summer.

HMA: Last question; are you a horror movie fan?

Entombed: Yeah. All the slashes/comedy, it’s great. But there are not too good horror movies coming out now. I’m looking for the TV shows, even that.