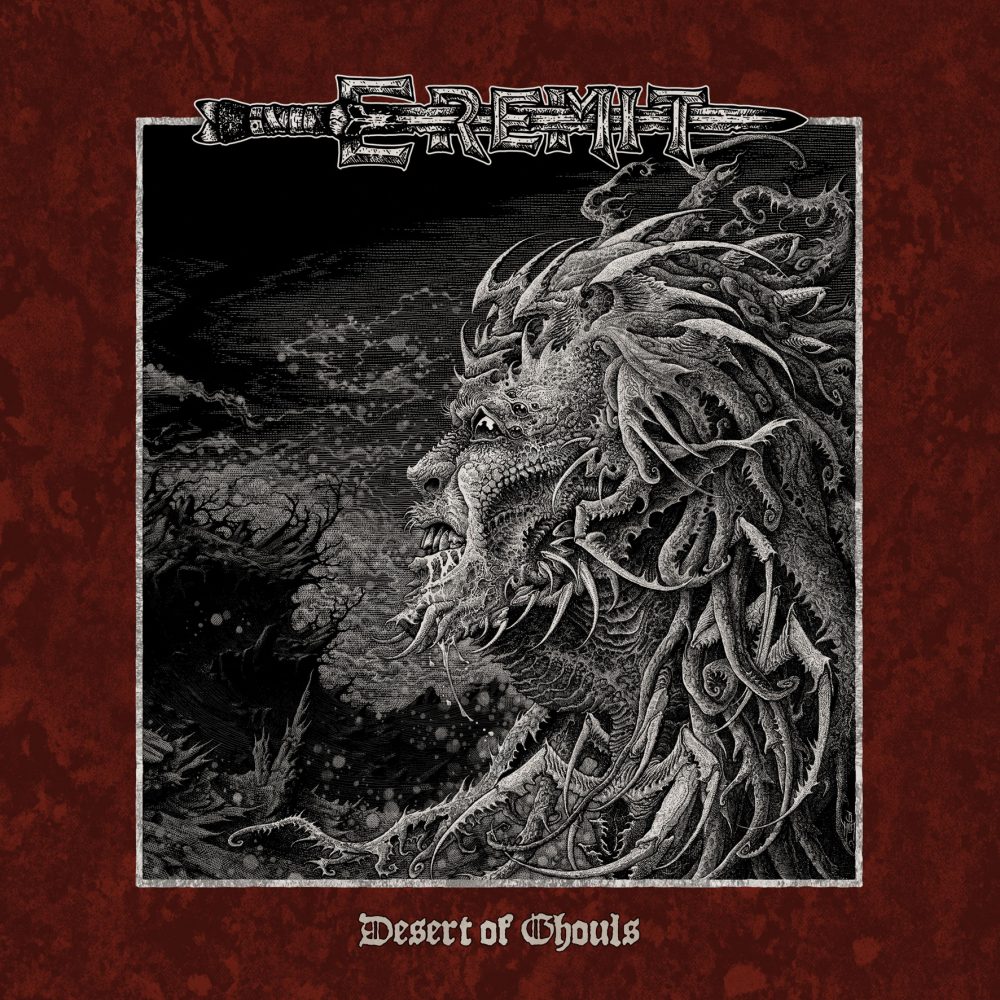 Desert of Ghouls by Moritz Fabian

Eremit was formed in the late days of 2015 as a three-piece doom band in Onabrück, Germany. The band plays massive and gnarly doom, telling a continuous story of a lonesome hermit in a dystopian world. Alongside playing a few local shows (Conan support, for example), Eremit recorded their debut record in 2017 at the Tonmeisterei Studio in Oldenburg, Germany. In 2018 the band signed to Transcending Obscurity, and in early 2019 their first record, ‘Carrier of Weight’, was released worldwide. 2019 saw the band touring through Germany, Austria and the Swiss. In 2020 a two-track EP called “Desert of Ghouls” was released, again we Transcending Obscurity Records. In the first half of 2021, their second full-length record, ‘Bearer of many Names’, is scheduled to be released.

Last summer, we released an EP called ‘Desert of Ghouls‘. The EP contains two tracks recorded in our second Studio session at the Tonmeisterei in Oldenburg, the studio where we recorded every record so far. In this session, we recorded five tracks and were unsure how to format we would later release this material. With time we decided to have three songs as our second full-length record and the remaining two as an EP. As our band is telling a continuous story, each piece is a chapter in the book we are simultaneously writing and releasing alongside the music. Both the EP and the upcoming LP are heavily linked and have to be seen as one.

‘Desert of Ghouls ‘ is just another name for the ‘Rap~pah Desert’. A place the protagonist of our story discovered after spending a lifetime on a seemingly endless sea. As described earlier, every song unfolds another chapter in our overarching story arch. This lore of ours is deeply interwoven in everything we do. Every song and record title, every image and illustration, every record cover, has a specific meaning and place in this story and is canon to our lore, our growing mythology.

Going into the actual themes relevant for this particular release, I would say it deals with the personal strength and ability to cope with a vastly changing world around oneself. The realisation that after a lifetime of believing that all there is in this world is an endless sea, your mind has to unlearn past truths and try to grasp that there is way more than one once thought and knew. And simultaneously acknowledge that in this new reality, different truths are floating through the air like distorted sounds of broken pipes. Where there is malevolence, there is also goodwill.

As we build our mythology, there is no existing moral codex or spiritual doctrine directly connected. Yet, I am very aware that the real world surrounding us all directly influences the understanding of life itself. All we know, all we can even think, is ultimately servant to the worldly experience we go through each day and night. As a student of political science, I believe that morals and political attitudes are being created and fostered in every tiny action and behaviour in our daily lives. And besides these more abstract philosophical ideas and thoughts, we also feel the urge to express again that we are opposing any form or racism and fascism. There is still a lot of tolerance for extreme right-wing political agenda in the metal community, and we are not ok with that.

Brandon Holt / Heathenlegs have done our Cover Illustration. Our logo is by Hagiophobic, and RG Rantanen has done the cover design.https://eremitdoom.bandcamp.com