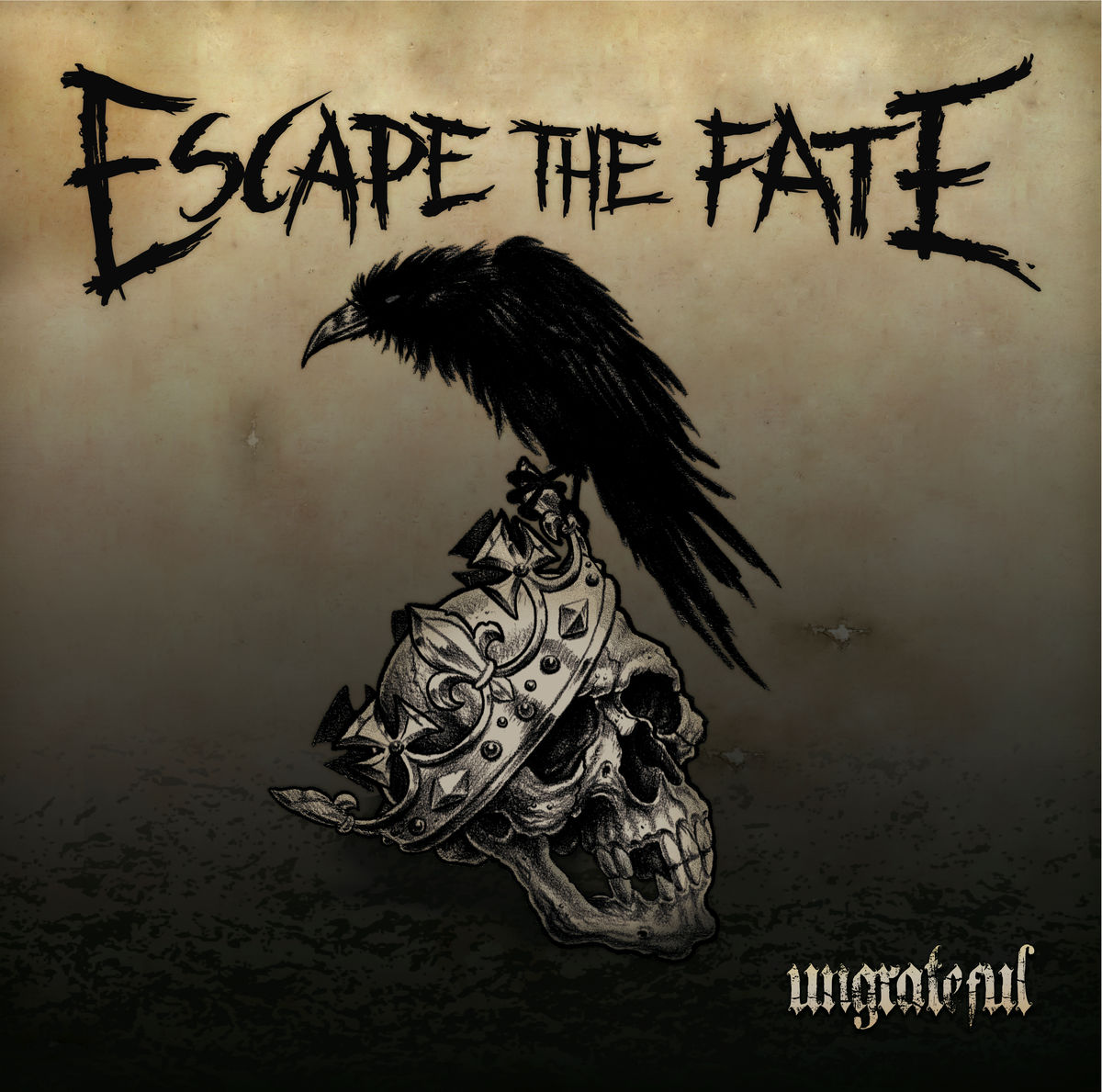 Despite a series of sudden lineup changes and controversy, American post-hardcore legends, Escape the Fate have managed to put out four studio albums, tour the world and scale high on the charts. It sounds inspiring to the ear but more often than not people don’t consider that even famous musicians are ultimately just people and their lifestyles often leave them scarred. It was strange to sit across from Robert Ortiz, the last original member of Escape the Fate, in a dimly lit room, listening to the clamour of roadies and venue staff outside. The damned mini-fridge in the corner of the room was humming like dirt bike ripping across a stretch of desert road! Robert was friendly in an unassuming manner but what really left an impression with me was that he wouldn’t start the interview before he had asked me what I liked to do, how I was enjoying living in London and what my dreams in life were.

Andy (HMA): I’m here with Robert Ortiz of Escape the Fate. Hello and thanks for your time, Robert.

Robert Ortiz: Hey, thanks for this!

Andy (HMA): You’ve certainly been through a lot. How do you feel now?

Robert Ortiz: Well this band…. I lost my sanity years ago as far as this fucking band goes. It’s been crazy, right? I’ve learned to take everything one day at a time. Right now it’s good. Everything is cool, we’re feeling good on stage, and everything is flowing right. It’s something we haven’t had in a long time. It makes me excited for the future but I don’t want to get too far ahead, y’know? How am I feeling? Good.

Andy (HMA): What have you taken out of all the hardships as a lesson?

Robert Ortiz: I think that when people meet me it takes them a while to really understand me. I’m personally scarred by a lot of the shit that I’ve gone through to be honest. A lot of people meet me and wonder why I never go out or why am I so quiet. I’ve just seen so much shit happen. I’ve seen the problems that addiction has caused to band members including close friends. All that stuff takes a toll. It makes you stronger inside but it also destroys your trust and openness to new things. You kinda start tiptoeing into new things. That’s how it’s been for this band. We struggle to trust people we bring in to help us.

Andy (HMA): ‘Ungrateful’ was your last album. How would you describe the process of writing and recording it in comparison to your previous albums.

Robert Ortiz: Looking back now I wish we had taken our time with it. I wish as a unit and a band we had resolved all of our issues first and that way we would have gone into it fresh and strong, and with the right producer. We really bounced around with John Feldman. We got a lot of amazing stuff out of the songs but we didn’t get everything out of them. We ended up trying different producers out because what we were missing with John Feldman was our heavy side which is very important to our identity. He got the catchy tunes, the hits, becaus we do write some pop songs along with the metal shit, but there was no metal, that was the problem. So we were like “We need this. Our album sucks without this stuff.” We decided to produce it on our own. It was a great experience, a humbling experience because until then we hadn’t realized that we didn’t know shit about recording. It did help us realize we don’t need a big time producer to help us write great songs. We did it on our own.

Robert Ortiz: Yes! That is literally our whole goal right now. We’ve been writing a lot, we’ve got a lot of ideas, not a lot of solid songs yet but we have riffs and choruses. We’ve decided we’re going to go back to being a rock band. We’re gonna get back to getting together and just jamming which is something we rarely do anymore. We ended up like most bands: recording instruments on the computer and exchanging tracks. I don’t feel good that way. It doesn’t feel right to me. It doesn’t feel like rock’n’roll when I’m sitting there punching things into a computer. I need to play my drums. I need to sweat it out. Kevin, our guitarist, has been saying that in order for us to move forward we need to go back. In 2015 it’ll be out and it’s going to be more of an emotional record.

Andy (HMA): So is it going to be dark and heavy?

Robert Ortiz: I assure you it is going to be very dark and heavy because that is just what we like to do. It’s not gonna be so much pop, it’s gonna be a lot more guitar driven.

Andy (HMA): You write very powerful music and very strong lyrics. What would you say is the secret to your success?

Robert Ortiz: I don’t know to be honest. I don’t quite get it. I was talking to a friend just the other day. She’s doing a paper on PR and she was trying to understand the negativity that this band had and how that catapulted our success. “We hate the band, therefore we love them.” It’s this weird thing we’ve had since the beginning. I don’t know why people gravitate towards us. I don’t know why at the lowest of lows we still can get a thousand people in any city to come and watch us. It’s weird, I don’t get it. Back in the day I used to say that we’re the real deal. We wear our heart on our sleeve, we have a certain vibe, and it’s much less about songs as it is about lifestyle. We represent something to people. We are spokesmen for something they believe in. Like, that is why I always stick to the thrash metal bands. That music meant something to me and those guys stood for something I believed in. I was a pissed off kid, lost and confused, moved from a small city to a big ass city, I had no identity except these bands like Metallica, Megadeth, Anthrax and Slayer. That was my identity and now that is what we are to other people.

Andy (HMA): Is that what you want people to get out of your music?

Robert Ortiz: Absolutely. That’s the thing. Even our bullshit songs…. I mean our biggest song is ‘One for the Money’. It’s a bullshit song. We just wanted to write a pump up song. It has no lyrical value; we just wanted something that would get people up and partying. Even that means something to people because the party lifestyle is such a big part of who they are. Sometimes I’m like “What about the song about me losing my friend or me getting bullied?” And people will be like “No, dude, I love fucking partying.” I understand that. I was young and full of cum at one point. It was crazy. It was all part of the life we led and now it’s part of other people’s lives.

Andy (HMA): What song of yours are you most proud of?

Robert Ortiz: They’re all my babies. They all have something that means something to me. I always tend to go back to ‘Picture Perfect’ because that song captured everything we wanted to do at the time. The guitar player had lost his friend and he wanted to write about it. It was a collaborative effort, we actually wrote that with Patrick Stump from Fall Out Boy and that dude is a genius. He understands music! You just write your lyrics and he’ll sing you this melody that is just bam. It was a beautiful collaborative effort. Lyrically it means the most. That song has me meeting fans who cry on my shoulder in every country and continent because they’ve lost someone. A girl in Poland gave me a hug and cried on my shoulder and told me she’d lost her mom and she’d played that song over and over. I mean, shit dude, I’m just a drummer. It’s not me, it’s the song that means something and I love that.

Andy (HMA): What question have you always wanted to be asked in an interview but haven’t?

Robert Ortiz: Oh shit…. [Laughs]. I’ve always wanted someone to ask me: “What question have you always wanted to be asked in an interview but haven’t?”

Andy (HMA): Well glad I could oblige then.

Robert Ortiz: [Laughs] No but, seriously, people tend to focus on the drama in the band and I’ve always just wanted to be asked things about…. Actually, I don’t know. So much of everything with this band has been the drama…. I need to think about that. I’ll get back to you next time.

Robert Ortiz: Fuck that bitch, let’s go get some hoes! [Laughs] No man, I’d just say you gotta keep your head up. There’s lots of fish in the sea but you gotta give yourself time to grieve and grieve in the right way. One thing this band has taught me is you gotta be strong because you don’t really have any choice.

Andy (HMA): Thanks for everything, Robert. I wish you the best of luck!

Robert Ortiz: Thank you and you too. Really enjoyed this.