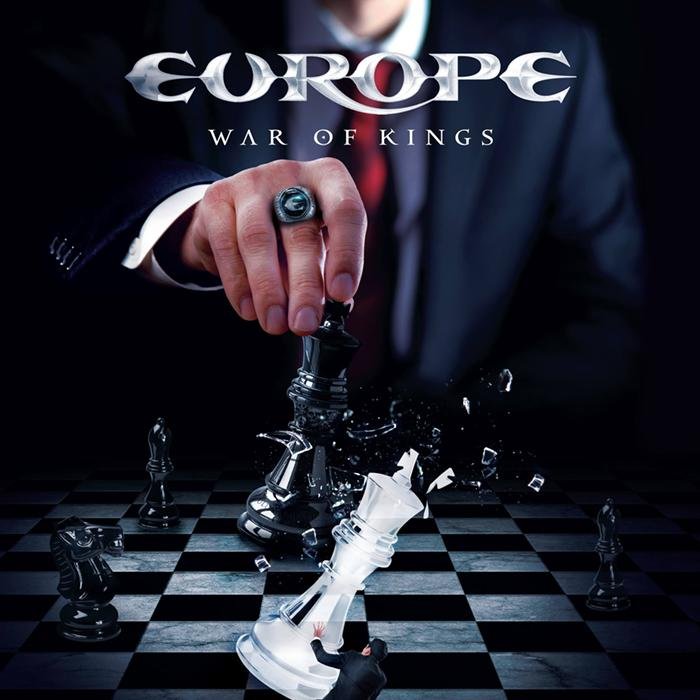 Everyone in Europe calls it “that song”. So I’m going to call it “that song”. Let’s not talk about “that song”, shall we? As great and classic as it may be…. It appears that years of accumulated wisdom and experience seem to have come together to bring Europe out of the detached and excessive decade which bred them, into the more grounded, less flashy modernistic vibe. I think this is best reflected in the band’s latest album, War of Kings (2015). Groovy, beautifully performed and produced, this album feels like the band reached back across the years to the very core of what made them fall in love with making music in the first place, and after shaking of the glitter and tangles of gold ribbon from it, they put it into full throttle.

John Levén is a guy who might as well have been a fairy tale character to me. I must have been no more than five or six when I first heard “that song”. Why do I keep referring to that “that song”? I refer to it because to me it is associated with a period of my life during which the world was a much brighter, vibrant and condensed place, and it revolved around my dreams and my expectations of life. That is what I think “that song” has become to John and everyone else in Europe. It is a part of their youth which was bright, golden and thrilling but which may or may not reflect who these people are today. Like looking at a photograph of yourself from fifteen years ago…. You recognize that that was you but at the same time, in lots of ways, it’s also a stranger.

Andy (HMA): It’s my pleasure to be speaking to you on behalf of Heavy Music Artwork, John. How is the tour going so far? Are you pleased?

John Levén: Yes, it’s been great. We are really pleased. We are a little nervous in the beginning because we were doing five new songs in the setlist.

Andy (HMA): Why did that make you nervous?

John Levén: We were nervous that we were maybe playing too many new songs since the album hasn’t been out for so long but it’s been going really well.

Andy (HMA): With double bill shows and curfews being what they are in this country do you ever feel like it’s a challenge to squeeze all the songs you want into a setlist?

John Levén: Yeah it’s a little bit difficult, especially now that we have ten albums to choose from. Obviously, you want to play as many of the newer songs as possible but there are certain songs you have to play. Like….that song, for example. [Laughs] We tried once. We were supposed to do Download Festival and we said before: “Let’s skip ‘Final Countdown’. Just this once let’s not play it.” We missed the whole show. The plane was delayed and we arrived right when we were supposed to finish the show.

Andy (HMA): So now you always play it?

Andy (HMA): Having too much choice seems to be a good problem to have.

John Levén: Oh yeah. It is.

Andy (HMA): What did producer Dave Cobb bring to the table for ‘War of Kings’?

John Levén: Well, he turned out to be the perfect choice for us. He had so many nice ideas about how to do the songs and he’s also very experienced in recording the way that we want to record which is basically playing live in the studio and trying to capture the right take. Also he’s very much into going to the studio and having fun. So it was a great atmosphere. It turned out really good.

Andy (HMA): How long did recording this album take?

John Levén: I think the actual recording was maybe three weeks and mixing took one week.

Andy (HMA): Back in the 80’s you used to spend a lot of time in the studio. What made you change?

John Levén: I think we have the experience to do it faster now. We finished the previous album [Bag of Bones] quickly too. Not too many overdubs and stuff like that.

Andy (HMA): Do you feel that ‘War of Kings’ is your strongest record to date?

John Levén: You always feel that way about your last album. I think it’s a really strong album. I felt that ‘Bag of Bones’ was the strongest but really, I think this one is much better than that.

Andy (HMA): What’s your personal favourite track off the album?

John Levén: That would probably be ‘War of Kings’, the title track or maybe ‘Second Day’. It’s really hard to pick out a favourite because I think the album has a lot of really good songs.

Andy (HMA): Which song do you expect to be an instant crowd pleaser?

John Levén: ‘Days of Rock’n’Roll’. That’s gonna be a big hit, I think.

Andy (HMA): Could you tell me a bit about the album’s cover design?

John Levén: Absolutely. We had this song – ‘War of Kings’ – and we thought it was also a really good title for the album but at the same time, we really wanted to stay away from having a fantasy-themed cover. That song is a little bit about Vikings so we didn’t want to have swords or longboats, or stuff like that. We left it to the artist to create something modern and interesting.

Andy (HMA): You’ve been doing this for a very long time. Do you ever find it difficult to accept some of the trends in rock music today?

John Levén: I could not tell you honestly. I don’t really follow what is happening in rock music. When I listen to music I go back to the ’70s.

Andy (HMA): Do you feel that you constantly need to evolve in order to appeal to audiences?

John Levén: No, what we want is to please ourselves first. If we’re not pleased we can’t please anyone else. We just try to do whatever we feel like doing.

Andy (HMA): Generally speaking can and should a band’s style and sound change?

John Levén: I can only speak for us. We’ve always said that we want to do what feels right at the moment and not go looking back at what we did before. After every album, there’s gonna be people out there going “Where’s the ‘Final Countdown’ album?” or “I loved you more in the ’80s.” We have to please ourselves and do what we feel like doing. I also think that if you follow artists like that, who make the same album over and over again, that’s really boring.

Andy (HMA): I agree. Tell me: What other forms of art have inspired you personally?

John Levén: I’m very much into literature and film and I used to draw a lot. I’m planning to go back to that. I was really good when I was a kid and I’d like to try again.

Andy (HMA): A lot of the great bands of the ’80s have sadly decided to call it quits. What are your plans?

John Levén: We’re all like 50+ now. [Laughs] You feel like there is gonna be an end someday but it hasn’t come yet. Look at Aerosmith and The Rolling Stones. They’re still going. We got a few more years to go. [Laughs]

Andy (HMA): I hope you’re around a lot longer than just a few years. My last question: the best piece of advice you’d like to give young artists?

John Levén: It doesn’t matter if you make music, movies, paint or write books, I think you should follow your heart and really stick with whatever you’re doing. Follow your gut and don’t give up.

Andy (HMA): John, thank you for this great chat. Can we say it together? Final….