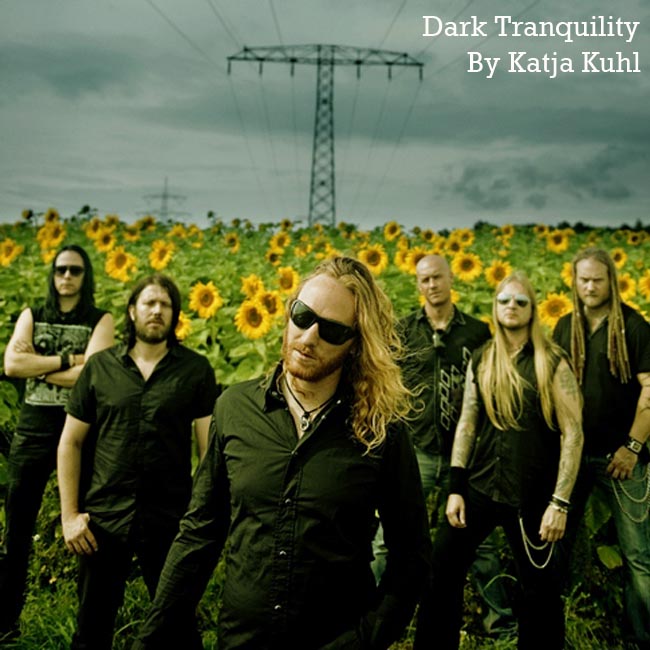 These days, Gothenburg Metal veterans Dark Tranquility are busy promoting their brand new opus “Construct”. But, in 2009 while playing on a German Festival, they decided to take a detour to have a promotional photo shoot at one of the most non-Metal places : a sunflower field. “We were kind of skeptical at first, hung-over and tired,” remembers singer Mikael Stanne. “But they turned out really well.”

The responsible for the shoot was German photographer/video director, Katja Kuhl. Well-known for his striking, advertorial and editorial images for fashion models and  musicians, she had been recommended by the band’s label, Century Media Records. “They said: ‘We got this different kind of photographer for a shoot. Are you up for it?’ And we were like ‘Yeah, sure.’”

The session took place in several locations, including the aforementioned sunflower field. Mikael doesn’t remember the name of the place but acknowledges it was simply stunning. He and the rest of the band were also impressed by the relatively fast pace everything took place. “I think that it took 4 hours or something like that,” says Stanne. “It wasn’t that bad. We had way worse when we do photo sessions. It’s probably my least favorite thing about the whole thing that we do because you’re basically like, standing around for hours and hours and it could be very fucking tedious, you know. It’s great when you have a professional that is fast, and that tells you what to do. This was a sunny day, we got into a good mood and she was really professional and cool so it wasn’t that bad.”

In the end, everyone seemed to be pretty much satisfied. Nowadays, both the band and the photographer proudly display some of the photos in their respective websites and social media spots. “That actually was pretty good, you know. We wanted it to be kind of real,  get away from the normal standard,” the singer enthuses. “Those were really cool photos, very different from the normal Death Metal photo. And that’s why we wanted them.”

Coming Up Next: Cradle Of Filth’s and their album debut images
Previously: Legendary photographer Fin Costello captures a young 1984 Metallica