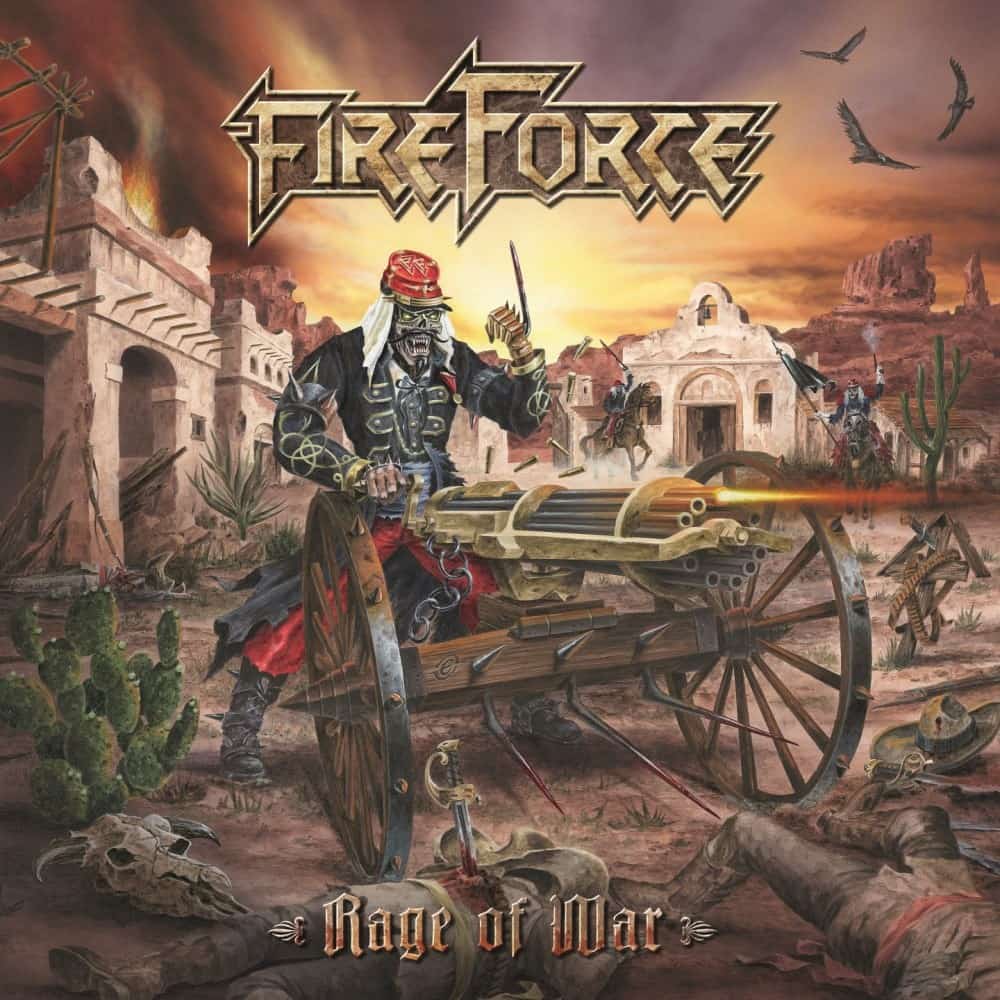 Rage of War with FireForce

We did the instrumental recordings in Belgium in Bob Briessinck’s Breeze Inc. Studios before the whole Corona thing started. He’s our sound engineer, and fortunately, he was available. He did a tremendous job. Vocal coaching is something different, though, and that’s why we went to Germany again, as we did for our previous albums, to record the vocals in the Prophecy and Music Factory studios. Lia, a very good friend of mine, knows how to coach a singer like no other. After all, it was the first time Hawk would record vocals for a real metal band, so we decided it would be the best choice. And because Hawk was eager to learn and was open to changes, it became a success.

The day we left the studio in Germany, in March 2020, after recording the vocals, Belgium and France started their first lockdowns. We were just in time back in our countries. In between the two lockdowns, we recorded our videos for the album and the extra songs. When this was done, a second lockdown kicked in. We were lucky at that moment that we took decisions quickly.

Fireforce is a combat metal band, and the origin of the name comes from a nice story. At the beginning of 2008, when I was still with Double Diamond, I and our chief roadie went to see ‘Firewind’ in Amsterdam. After the show, we went to a Thai restaurant with the guys, and we talked about their tour with ‘Dragonforce’. We were fooling around with the names of the bands and came up with ‘Dragonwind’ (but that smells bad, haha!) and Fireforce. When I said this name, Apollo said, ‘That’s a damn cool name!’. And from that moment on, I knew that when I should leave DD and start something new, it would be called ‘Fireforce’. Later on, I discovered that the former Rhodesian army used this name as an attack tactic.

Power metal is the music I like best. It has raw power, melody and feeling. It all started with albums like ‘The Walls Of Jericho’ by ‘Helloween’ and ‘Metal Church’s first anthem. Doesn’t everybody has these moments? During your whole life, you have choices to make and decisions to take. It’s every time a y road. Are you going left or right? And then stuff happens. Sometimes it goes well, and sometimes it hits you like a ton of bricks. That’s a hard one. Motivation has to come from your inside. For me, it’s the urge to create something. To make something that will stand the test of time. I like to create; I like to give people something in this case that would be a good feeling by music.

I’ve always been interested in history. If we don’t learn from history, the same mistakes will be made over and over again. I think stories from individuals who single-handedly changed history are very interesting. Sometimes their great deeds changed the outcome of a battle, while others did something stupid and were forgotten. Stories like that intrigue me. Then there is the ruthlessness and cruelty of how some leaders treat their people. A lot of people around the world today are still having to put up with tyranny.

For example, the song ‘108-118’, it’s about the Kursk. 108 meters deep, 118 lives lost. It could have been less if the Soviets had allowed help from other countries, but they didn’t. Or ‘A Price To Pay’ refers to a tweet from a person we all know in response to a chemical attack… The people guilty have to pay the price for that, and later *they* will be saying ‘they’ll pay the price for that. This way, it will never stop. There will always be a price to pay for someone. ‘Running’ is about Zulu warriors that could run very long distances and still have enough energy left to charge their enemies when they arrive. Incredible… If you’re curious about the other songs: read the lyrics on the album.
http://fireforceband.com