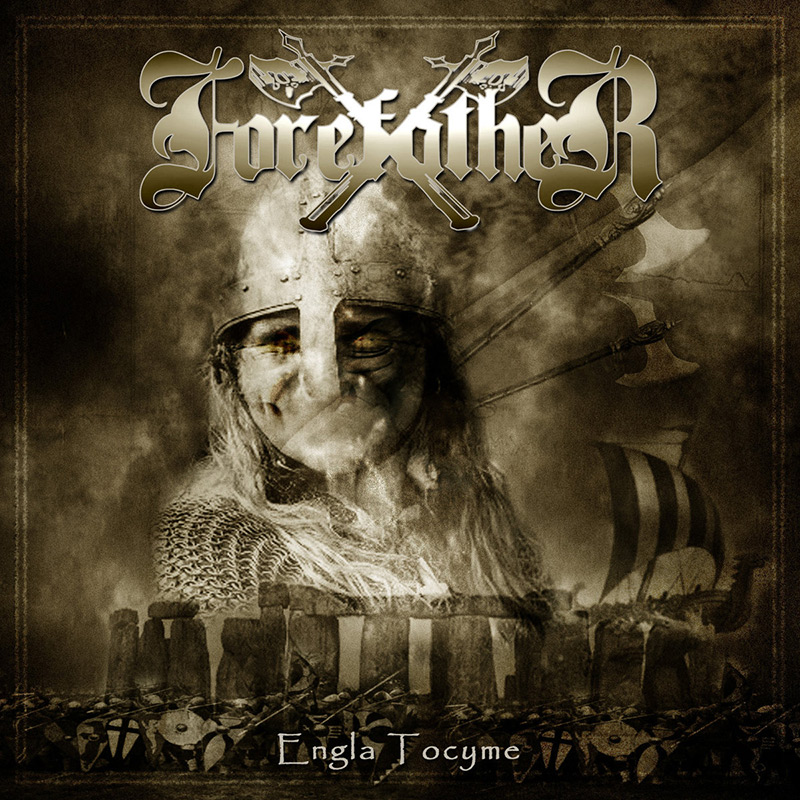 Reach into the ether and let it speak through you

Forefather is the recording project of myself Wulfstan and my brother Athelstan, founded in 1997. We blend elements of traditional, black and death metal with lyrical themes based on English history, myth, nature and more. We have released seven studio albums, starting with 1999’s ‘Deep Into Time’, and most recently 2015’s ‘Curse of the Cwelled’. In 2017 we released our first ever EP ‘Tales From a Cloud-Born Land’, which is featured on the split-CD ‘English Steel’ with The Meads of Asphodel. ‘Tales From a Cloud-Born Land’, featuring 30 minutes and seven tracks of brand new material, recorded this year. It’s available as a stand-alone digital release via our own label Seven Kingdoms, and also as part of a split-CD with The Meads of Asphodel called ‘English Steel’, released by Godreah Records.

Musically, the tracks that I wrote were written a long time ago in the period between our last full-length albums ‘Last of the Line’ (2011) and ‘Curse of the Cwelled’ (2015). The material that Athelstan contributed was written more recently. Our songwriting process usually starts with a riff or melody that either of us come up with while playing about on the guitar. Then one riff or melody instinctively leads to others, and eventually, we have a song.  Sometimes, completely separate parts written at different times end up working together too. All the lyrics were written this year during the recording process. We focus on ancient and medieval English history, mythology (including Tolkien’s work), and reverence of ancestors and nature. Athelstan struggled with the track “Daughter of Twilight” and nearly abandoned it, but he persisted, and after tweaking the arrangement and parts of the production, it worked out well. The highlight was finishing everything because the recording is a lot of hard work! We work in a home studio and handle all instruments, vocals, and production ourselves.

The stand-alone release and the split-CD release have different covers, the latter being more generic and not specifically related to our tracks. We think the stand-alone artwork (which can be seen on our Bandcamp page, for example) represents the spirit of the release very well.

I came up with the concept and Athelstan designed/created it using some of his own photography. It’s based on the track “Two Sacred Oaks” which also inspired the EP’s title. I was reading an article about the brothers Harold and Tostig Godwinson (who are famous characters to anyone who knows anything about English history around the year 1066) and their campaign in Wales against Gruffydd. In the article the author quoted a chronicler who in the Vita Ædwardi Regis (Life of King Edward) described Harold and Tostig as being like “two sacred oaks from a cloud-born land”, and how “like Atlas before them who held up the heavens, so they defend the English realm”. And I thought that “Two Sacred Oaks” would make a great song title. So, the cover of the EP depicts those two sacred oaks like mighty pillars holding up the sky, and the clouds, of course, relate to the “cloud-born land”, England.

Both the track ‘Strongbow’s Death’ and the instrumental ‘Daughter of Twilight’ are inspired by Tolkien. The former is about the tragic death of Beleg Cúthalion at the hands of his friend Túrin Turambar, and I thought that ‘Daughter of Twilight’, which was the nickname given to Luthien by Beren, was appropriate because the music brought to mind Beren watching Luthien dance in the forest, which is a core part of that tale. With ‘In Victory We Feast’ I had in mind a celebratory feast after the English victory at Stamford Bridge in 1066. This has connections to “Two Sacred Oaks” because Harold Godwinson’s brother Tostig eventually turns against him and is killed at this battle.