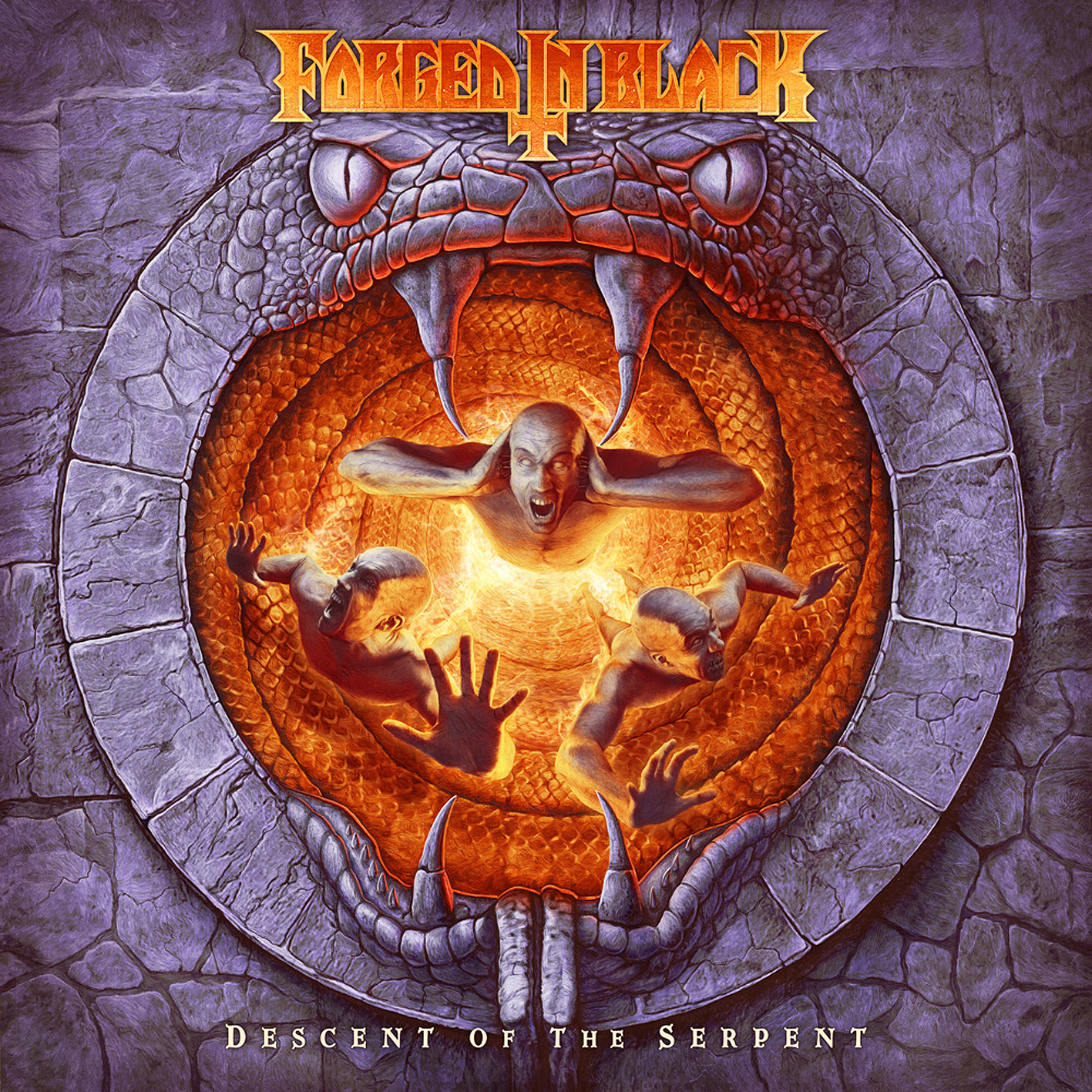 Descent of the Serpent By Chris Stoz Storozynski & Kieron Rochester

Forged in Black began with the aim of re-inventing traditional heavy metal with a unique contemporary edge. Operatic vocals lead the charge and are backed by dark, hard-hitting music that includes: full-throttle thrash; epic guitar harmonies; crushing doom riffs and aggressive guttural vocals. The band’s live show embodies the energy of the music by delivering copious amounts of head-banging; charismatic stage presence and much crowd involvement

We are a heavy metal band, hailing from Southend-On-Sea in the UK. The band was put together ten years ago by Kieron and Andy when they were at school. Since they brought the rest of us on board, we have been writing and gigging around the UK bringing our style of heavy metal with us. We have released two albums and three EPs over the years, working with producers such as the late great Chris Tsangarides (Judas Priest, Yngwie Malmsteen, Black Sabbath) and Romesh Dodangoda (Bring me the Horizon, Motörhead). Our latest release is ‘Descent of the Serpent’ released this year via Fighter Records.

‘Descent of the Serpent’ is a collection of songs we have written in our style of heavy metal. We draw from doom, thrash and groove metal vibes whilst adding our own individuality. We wrote the album collectively over a twelve-month period and managed to secure the services of Romesh Dodangoda to hit the record button and work his magic in the studio. We set camp at longwave studios in Cardiff for two weeks, laid down an album we are supremely proud of and hope your readers will enjoy checking it out.

We wanted the artwork to be a visual representation of some of the songs on the album. We finally decided it would be best to use only two songs, so the artwork wasn’t overly complicated. We settled on a mix of “Seek no Evil” and “Descent of the Serpent”. As you can see, we have the Stone Serpent centrally with the three protagonists from “Seek no Evil” as the afflicted ancestors tormented and travelling towards us. With our limited art skills, (well, more mine) we roughly sketched the artwork after playing at a Hell’s Angel bar. Armed with beers, a scrap of paper and an acquired bic biro, we managed to get a working design for the album cover. “But whose skilful hand should we seek to create the final product for us?” we mused. After reviewing other bands’ artwork, we decided upon the talents of Mr Dan Goldsworthy, who did covers for Hell, Accept and Gloryhammer to name just a few. We sent him the sketch and luckily he was free and willing to work on the project. As you can see, he is a truly talented gent and has created a stunning cover – more than we could have ever asked for. He has also designed the full cd booklet and cd case.

This isn’t a concept album, so each song has its own path and idea. I write about many different themes but consistently go back to the ever-present battle between light and darkness, be it mentally, politically or physically. There are many struggles in the modern world and our lyrics often deal with this as well as ideas about hope and where it can be found. Alternatively, historical themes are explored. The title track “Descent of the Serpent” is about the Mayan Temple of Chichen Itza and the Stone Serpent awakening on the Equinox to bring back their ancestors through sacrifice. The lyrics are printed in the cd booklet if you would like to read and explore further.

We draw and look for inspiration in most aspects of day to day life. Experiences, strife, turmoil and overcoming adversities. I don’t think movies specifically have ever influenced us, but, certainly, religion, politics, news, war, myths and legends all play their part in our chosen art. These are all things that make us who we are and our music and lyric writing is, in turn, the product of this.