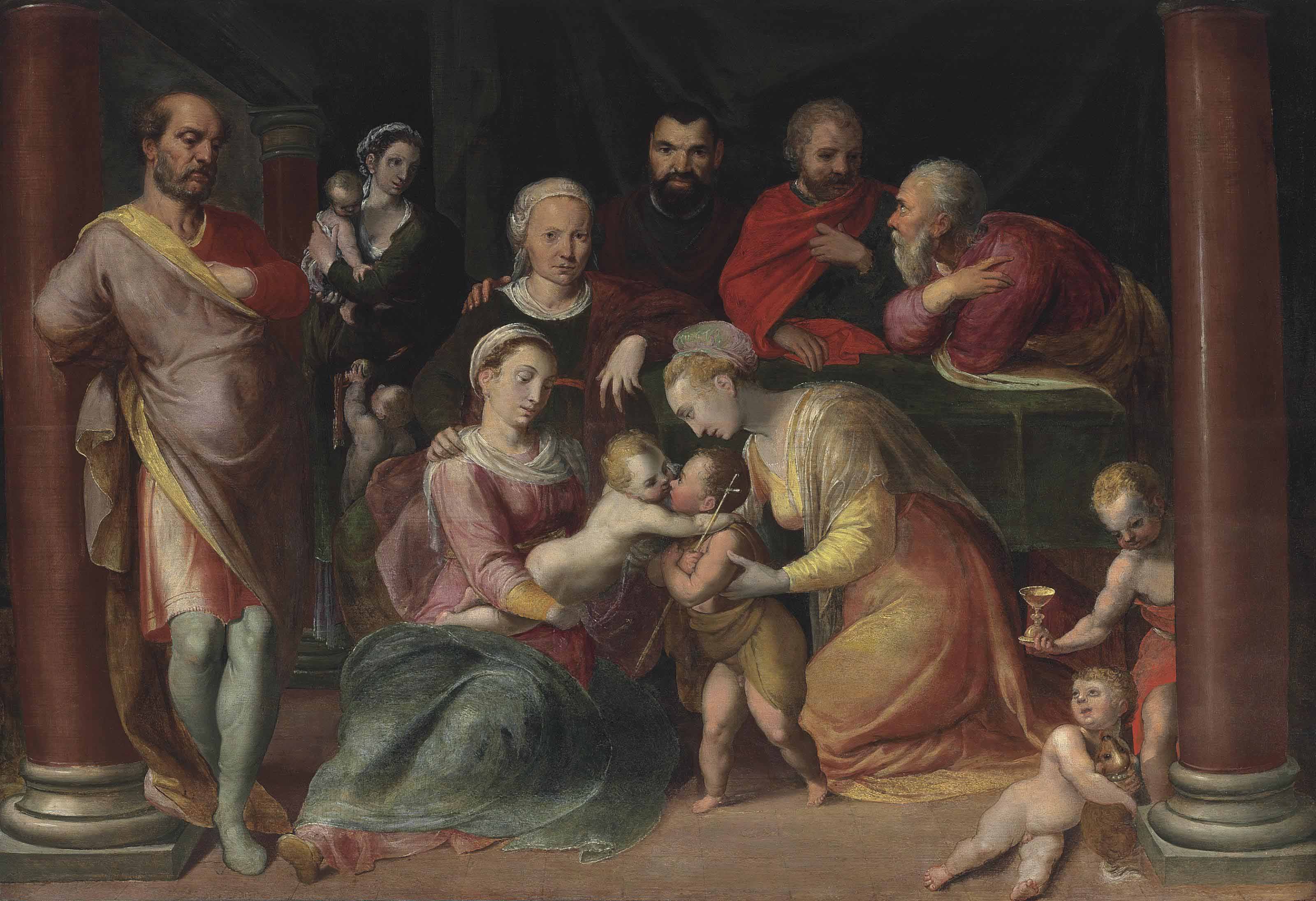 Frans Floris, or more correctly Frans de Vriendt, called Floris (1517 – 1 October 1570) was a Flemish painter. He was a member of a large family trained to the study of art in Flanders. Most of what we know of his youth is handed down from Karel van Mander’s biography of him, which was at ten pages long, one of the most detailed biographies in his Schilder-boeck. Frans was the son of the stonecutter Cornelis I de Vriendt (died 1538), whose family name was Floris, but who was so friendly that he took on the name Vriendt, or Friend, and this became the last name of his gifted stone-cutting son, Cornelis Floris de Vriendt (1514–1575). Frans had two other brothers who were excellent artists; Jacques Floris, a glass painter, and Jan Floris, a famous porcelain baker who entered the service of Philip II of Spain. Jan traveled to Spain to conduct his art there and died young, but according to Van Mander, Frans had many examples of his work in his workshop that delighted his disciples. Like his brothers, Frans began as a student of sculpture, but later gave up carving for painting. At the age of twenty he went to Liege and took lessons from Lambert Lombard, who highly encouraged studying in Italy.

Floris traveled to Rome and quickly became enamored with the painting (particularly Michelangelo) he found in Rome. He made many sketches in red chalk that his disciples eagerly etched. Upon his return home, he opened a workshop on the Italian model and enjoyed such a grand success that it went to his head and he took to drinking. According to Van Mander, Dirk Volkertsz Coornhert sent him a letter in which he claimed Albrecht Dürer felt that Floris had more thought for his art than for his own life. Apparently Coornhert was not the only one concerned, but Floris’ wife Clara was also worried about him, and it was at this point in his career that his brother Cornelis built a palace for him in Antwerp with a facade of blue limestone (Orduyn-steen) and with luxurious decorations such as gilded leather wall-coverings in the bedroom. It was hoped that with his own palace with a workshop he would become a better manager and housefather, but according to Van Mander, the contrary happened, and his yearly income slid from an almost incredible 1000 guilders per year (a fortune in those days) to nothing but debts in his old age. It must have been fun for the pupils and other workers in his workshop however, because it was said that he could even drink a Franckfoorder under the table. His pupils loved him, and when his old teacher Lambert Lombard came to visit and claimed he was nothing but an idea thief, Frans’s pupils nearly lynched him, and he was saved by Frans himself, who just laughed it off. Van Mander even goes on to state that he nearly always had a large commission in the workshop that he would work on late at night, and the pupils who stayed latest would undress him (taking off his shoes and stockings) and put him to bed before they left. Van Mander claims that according to Frans Menton, Floris was loved by his pupils for allowing them more freedom than other Antwerp masters, and a list of 120 of his disciples was put together by a small group of them who met for a reunion after his death.

Van Mander includes a list of leading Antwerp church altars as coming from his workshop, but according to his story, these were then not only by Floris himself, but created from a team of changing pupils under his guidance. Floris painted a series of large pictures for the country houses of Spanish nobles and the villas of Antwerp patricians. He is known to have illustrated the fable of Hercules in ten compositions, and the liberal arts in seven for Nicolaas Jongelinck, a merchant of Antwerp, and adorned the duke of Arschot’s palace of Beaumont with fourteen colossal panels. Comparatively few of his works have descended to us, possibly because many were destroyed in the iconoclastic uprisings in Antwerp of the second half of the sixteenth century, and partly because this era in Flemish painting has fallen out of favor in art circles. The earliest extant canvas by Floris is the Mars and Venus ensnared by Vulcan in the Berlin Museum (1547). There are other works at Aalst, Antwerp, Copenhagen, Dresden, Florence, Zoutleeuw, Madrid, St Petersburg, Châlons-en-Champagne and Vienna. The boldness and force Floris’ works possess reflect the monumental style of their Italian models. Their technical execution reveals a rapid hand, bright coloring, and a mastery of anatomy not always evident in Netherlandish art of the time. Floris owed much of his repute to the cleverness with which his works were transferred to copper by Jerome Cock, Cornelis Cort, and Theodor Galle.

Van Mander lists more than 20 disciples, but also claimed that according to Frans Menton, Frans Floris was loved by his pupils for allowing them more freedom than other Antwerp masters, and a list of 120 disciples were counted in total by a small group of them who got together for a reunion after he died. Whilst Floris was engaged on a Crucifixion of 9.7 m, and a Resurrection of equal size, for the grand prior of Spain, he was seized with illness, and died on 1 October 1570 at Antwerp. His paintings for the grand prior were finished by Frans Pourbus the Elder and Crispin van den Broeck. He had a motto; Als ick werck, dan leef ick: als ick spelen gae, dan sterf ick. This means “When I work, I live: when I play, I die.” Poems were written about him by Dominicus Lampsonius and the poet-painter Lucas de Heere, who according to Van Mander, was his disciple.